Here is a quick question for you – who was the first person Paul led to the Lord? Well, no one knows for sure. Paul most certainly led a number to faith in Christ even before he took his 1st Missionary Journey. However, the first one recorded in Scripture, took place on the island of Cyprus. It was here that the Apostle led a Roman Proconsul by the name of Sergius Paulus to Christ.

“Now when they had gone through the island (i.e., Cyprus) to Paphos, they found a certain sorcerer, a false prophet, a Jew whose name was Bar-Jesus, who was with the Proconsul, Sergius Paulus, an intelligent man. This man called for Barnabas and Saul and sought to hear the word of God. But Elymas the sorcerer (for so his name is translated) withstood them, seeking to turn the proconsul away from the faith. Then Saul, who also is called Paul, filled with the Holy Spirit, looked intently at him and said, "O full of all deceit and all fraud, you son of the devil, you enemy of all righteousness, will you not cease perverting the straight ways of the Lord? And now, indeed, the hand of the Lord is upon you, and you shall be blind, not seeing the sun for a time." And immediately a dark mist fell on him, and he went around seeking someone to lead him by the hand. Then the proconsul believed, when he saw what had been done, being astonished at the teaching of the Lord.” – Acts 13: 6 – 12 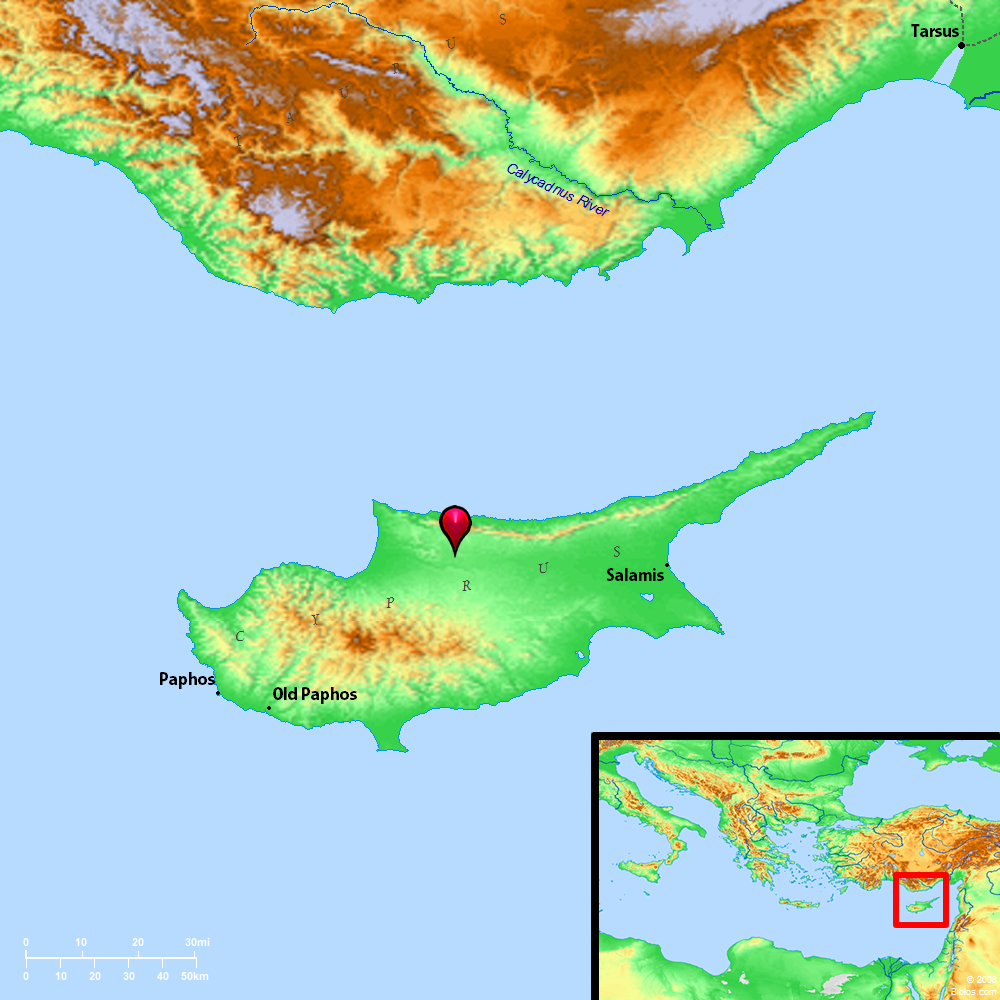 Cyprus must have been an interesting place for Paul and his cohort, Barnabas to visit. The island was heavily influenced by Greek culture. It was a staging area for all sorts of Roman activities throughout the eastern Mediterranean. And as the text suggests, it was influenced by the occult.

Their outreach to the Cypriots occurred around 47AD.  Luke, the author of the Book of Acts, is careful to refer to Sergius Paulus as ‘Proconsul’. Sure enough, this is the proper title for a Roman ruler sitting in authority on Cyprus at that time.

In 22 BC however, Rome changed the status of Cyprus from one of an annexed territory to that of a full-fledged province. Once a territory became a province, it fell under the authority of an appointee of the Roman Senate. As such, a ‘Proconsul’ assumed ruling authority for the island.

“One of the most remarkable tokens of (Luke's) accuracy is his sure familiarity with the proper titles of all the notable persons who are mentioned . . . Cyprus, for example, which was an imperial province until 22 BC, became a senatorial province in that year, and was therefore governed no longer by an imperial legate (a Propraetor) but by a Proconsul. And so, when Paul and Barnabas arrived in Cyprus about AD 47, it was the Proconsul Sergius Paulus whom they met . . .”  (FF Bruce, The New Testament Documents: Are They Reliable?)

Luke is not just accurate in his use of titles.  Historians and archeologists have collected evidence for the existence of this particular Proconsul.

In 1877, an archeological dig was taking place in the area near ancient Paphos on Cyprus.  Supervising the excavation was Luigi Palma di Cesnola. Cesnola had been a Medal of Honor recipient for his efforts during the American Civil War.  After the war ended, he was appointed US Consul in Cyprus. Once there, he led a number of excavations. Incidentally, he would eventually be named the first curator of New York’s Metropolitan Museum. He located an inscription that proved a Proconsul named Paulus did exist. The inscription was in a marble block that was used to consecrate a monument in the 1st Century, and it read as follows:

“Apollonius to his father … consecrated this enclosure and monument according to his family’s wishes  … having filled the offices of clerk of the market, prefect, town-clerk, high priest, and having been in charge as manager of the records office. Erected on the 25th of the month Demarchexusius in the 13th year (of the reign of Claudius). He also altered the senate by means of assessors during the time of the Proconsul Paulus.” (http://www.biblehistory.net/newsletter/paulus.htm)

The 13th year of the reign of Claudius would be 54AD, or just after the time of Paul and Barnabas’ visit. It could be that he is one in the same as the Sergius Paulus who was reached out to Paul and Barnabas.

Additional evidence for the existence of Sergius Paulus comes from a 1st Century Roman source. Pliny the Elder, as history refers to him, was a Roman naval commander who lived from 23 – 79 AD. He was also a statesman, naturalist, and historian. A good deal of what we know about ancient Rome comes from his writings. Being in such influential positions, he came to know personally many of the important Roman political figures of the day.

Pliny the Elder’s most important work is Naturalis Historia (Latin for Natural History). It is for all intents and purposes, Rome’s encyclopedia of the day. It is also one of the largest single works of Roman literature to have survived. He writes a good deal on Cyprus. In fact, He references a certain ‘Sergius Paulus’ in his list of sources or authorities for Books 2 and 18 of his Natural History (Pliny, Natural History 1; LCL 1: 29, 87).

Here, Pliny the Elder confirms the presence of magicians (or what Luke calls ‘sorcerers’) on Cyprus in the 1st Century. They were so prominent that he actually gives them a place in his discussion of the island.

Before we leave Sergius Paulus, one more item is worth reviewing. Scripture tells us Asia Minor was the next place Paul and Barnabas journeyed to after leaving Cyprus. In fact, they head specifically toward Antioch in Pisidia (see Acts 13: 13 – 14).

An inscription is on display in the Yalvac Museum within Turkey that was found in the vicinity of Pisidian Antioch.  The whole word “Paulii” and portions of “Sergii” are visible on it. (http://www.padfield.com/2008/antioch-of-pisidia.html)  It would seem that the family of Sergius Paulus had a large estate in this area. The inscription itself may even be a reference to the Proconsul. Who knows? Maybe Paul and Barnabas headed there at the request of the Roman Commander with the hopes of leading his family to Christ! 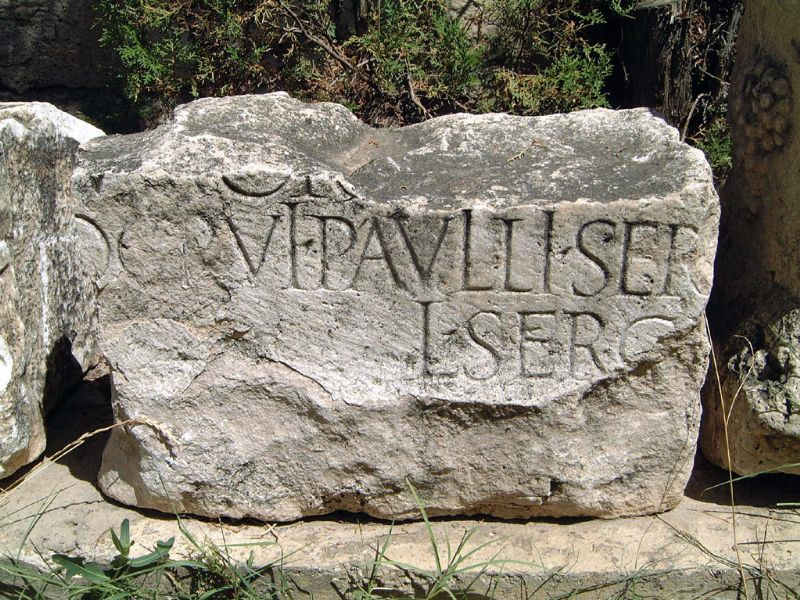 The exercise we just performed on these few verses in Acts 13 could easily be performed on every chapter. Luke pays remarkable attention to detail and has yet to be proven incorrect in any facet of his work. The Bible is a book of history. Under the inspiration of the Holy Spirit, the authors of Scripture recorded without error the writings that make up Holy Writ!

Here are some figures that are worth noting about the Book of Acts. Luke identifies 110 individuals by name.  (http://www.thruthebible.org/site/c.irLMKXPGLsF/b.4380271/) Many of these have been verified to history through some extra-biblical source. (Geisler, Norman,  I Don’t Have Enough Faith to be an Atheist, Crossway, Wheaton, Illinois, 2004, pg. 270) In addition, Luke references 32 countries, 54 cities, and 9 islands. (Geisler, Norman Baker Encyclopedia of Apologetics Baker Books, Grand Rapids, Michigan, 1991, pg. 227) Every one of these has now been located archeologically with certainty, with the possible exception of Phoenix (mentioned in Acts 27: 12 as a port on Crete). (http://www.harvardhouse.com/correlate_1.htm)

Perhaps Sir William Ramsay summed it up best, “Luke is a historian of the first rank; not merely are his statements of fact trustworthy, he is possessed of the true historic sense . . . In short this author should be placed along with the very greatest of historians.”  (Sir William Ramsay, St. Paul the Traveler and Roman Citizen)