The location of Joshua’s Conquest city of Ai has been a matter of mystery and controversy since the beginning of archaeological research in Israel. Certain scholars concluded that the location of Ai was at a site called et-Tell, deferring to the conclusions of the “father of biblical archaeology”, Dr. William F. Albright (1920’s) and Joseph Callaway (1960’s). They have used this conclusion to discredit the biblical account of Joshua 7-8 because no evidence of an occupation was discovered at et-Tell in the Late Bronze Age at the time of Joshua. As a result ABR has spent the last 40 years in painstaking original research and we now believe that we have identified the true site Ai at Khirbet el-Maqatir. After careful surveys and the collection of an enormous amount of geographical, historical and archaeological evidence, we are confident that the “problem of Ai” has finally been solved!

Khirbet el-Maqatir is located approximately 9 miles north of Jerusalem and 0.6 miles west of et-Tell, the site most scholars identify as Joshua’s Ai. Evidence was found for five major periods of occupation at the site, from the Middle Bronze Age through the Byzantine period. 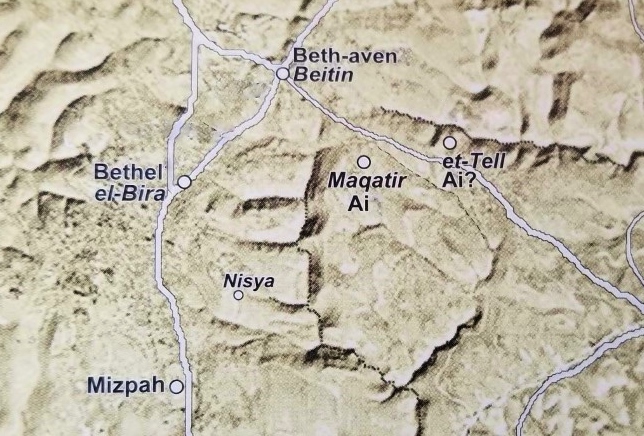 Map showing the location of Khirbet el-Maqatir, the site ABR believes to be the correct location of ancient Ai, and the likely locations of biblical Bethel and Beth-aven. 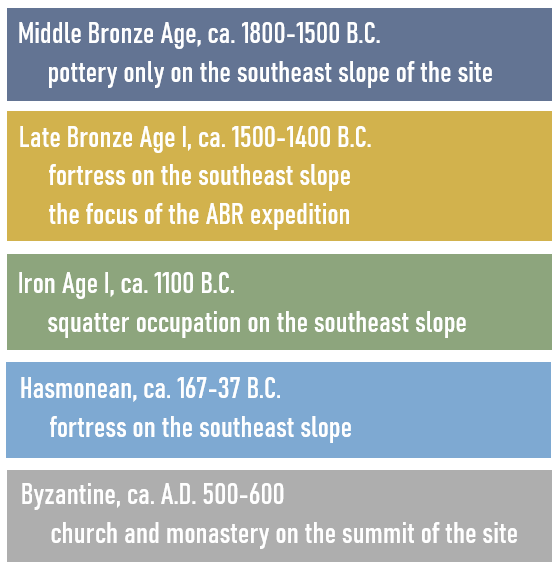 After fourteen excavation seasons, we have concluded that Khirbet el-Maqatir fulfills the critical biblical requirements for Ai as described in Joshua 7–8. These biblical prerequisites for a correct identification for the location of Ai have become our strongest evidence that ABR has correctly identified the northern border fortress of Ai. These requirements can be divided into two categories, geographical and archaeological:

Ai Must Be a Strategically Significant Site (Joshua 7:2)

Khirbet el-Maqatir is located on the southern bank of the Wadi el-Gayeh, which was the border between the central area of the highlands, under the control of the city-state of Shechem, and the territory of Jerusalem to the south. From Khirbet el-Maqatir there is clear line-of-sight communication with Jerusalem. Based on its strategic location and archaeological findings there, Khirbet el-Maqatir appears to have been a northern border fortress for the Jerusalem city-state at the time of the Conquest. After the Israelites defeated Jericho (Joshua 2–6), thereby gaining a foothold in the Promised Land (Cis-Jordan), Joshua sent spies to Ai in the highlands to the west (Joshua 7:2). Ai clearly was important in Joshua’s overall military strategy for conquering Cis-Jordan. After eliminating the “early-warning system” of Ai (Joshua 7–8), the Israelites conducted a campaign against a coalition of southern city-states led by Jerusalem (Joshua 10). Thus Khirbet el-Maqatir is consistent with the Biblical description of Ai as a militarily important site that needed to be eliminated prior to conducting a southern campaign.

When Joshua described the location of Ai to the spies, he said it was “near Beth Aven” (Joshua 7:2). The Hebrew word used here, ‘im, means “close to, beside.” The most likely location for Beth Aven is Beitin; Kh. el-Maqatir is just 1 mile southeast of Beitin.

Joshua further told the spies that Ai was “to the east of Bethel.” The best candidate for Bethel is el-Bireh; Khirbet el-Maqatir is east of el-Bireh.

In the list of defeated kings in Joshua 12, Ai is described as being “missad Bethel,” meaning “in the vicinity of” Bethel. Khirbet el-Maqatir is 2 mi east of el-Bireh. Bethel was aligned with Ai, as the men of Bethel joined forces with the men of Ai in fighting the Israelites (Joshua 8:17).

Joshua placed an ambush force (or forces) “between Bethel and Ai, to the west of Ai” (Joshua 8:9, 12). This requirement is met by the Wadi Sheban between el-Bireh and Kh. el-Maqatir. It is a very deep valley, hidden from view from both Khirbet el-Maqatir and el-Bireh.

When the Israelite army arrived at Ai, Joshua and his generals “set up camp north of Ai, with a valley between them and the city…they had the soldiers take up their positions—all those in the camp to the north of the city and the ambush to the west of it” (Joshua 8:11, 13). Jebel Abu Ammar, 1 mi north of Khirbet el-Maqatir, is the highest hill in the region and would have been an excellent command post from which Joshua’s generals could have viewed the entire battle field.

Joshua did not remain with the main army, but rather took a small diversionary force and spent the night in the valley between the camp and Ai (Joshua 8:13). This mimicked the small force that  initially attacked Ai and was defeated (Joshua 7:4–5). “When the king of Ai saw this, he and all the men of the city hurried out early in the morning to meet Israel in battle” (Joshua 8:14). The valley north of Ai must have been a shallow valley in order for the king of Ai to observe Joshua and his men. The Wadi el-Gayeh between Kh. el-Maqatir and Jebel Abu Ammar is just such a valley. 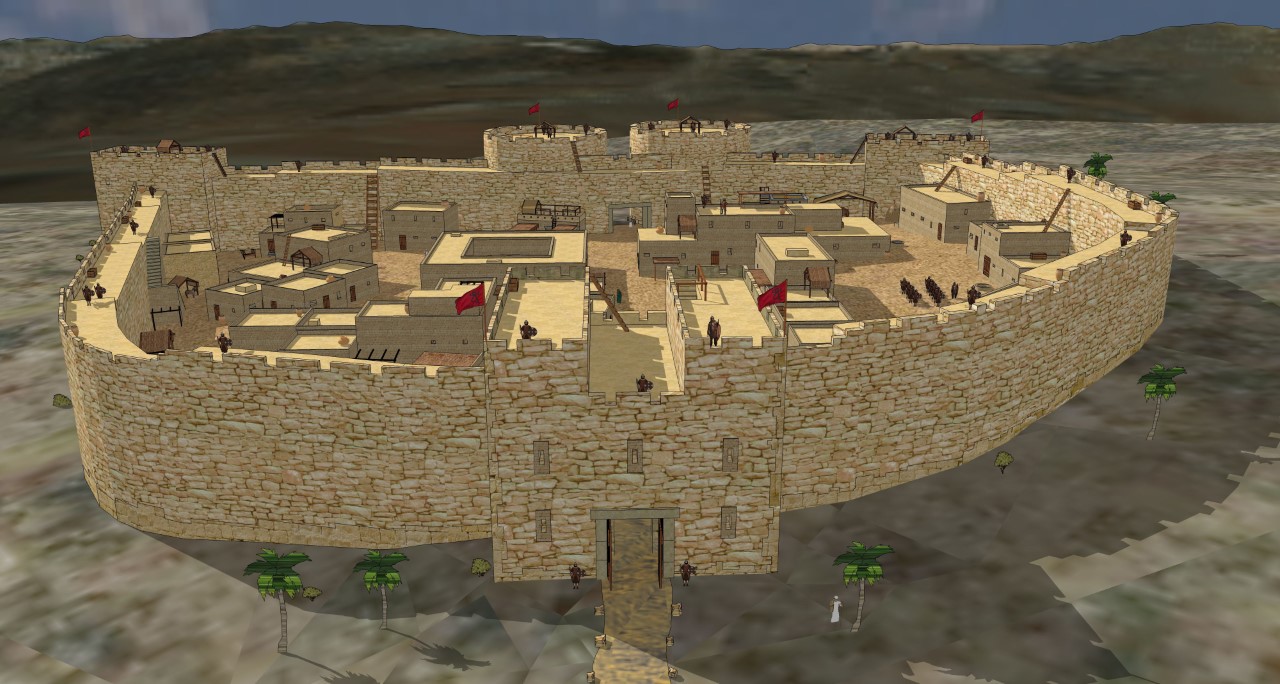 This wonderful recreation of the Khirbet el-Maqatir fortress was designed by Tom Miller for Associates for Biblical Research.

Since a gate figures prominently in the account of the capture of Ai (Joshua 7:5; 8:29), it can be assumed that the site was fortified. Already in the first exploratory season in 1995, a large lower gate socket stone was discovered. Subsequent seasons revealed the west chamber of a two-chambered gate, as well as an additional lower gate socket stone and an upper gate socket stone (Wood 1999c: 28). Pottery found in conjunction with the gate dates to the Late Bronze I period (ca. 1500–1400 B.C.; Wood: 231–36), the time of the Conquest. The east chamber of the gate has not survived as the stones were robbed out by later occupants, probably during the Hasmonean period (167–37 B.C.) when another fortress was built over the east half of the Late Bronze I citadel. Excavations from 1996 to 2000 uncovered sections of the Late Bronze I fortress wall 12–13 ft wide on the north, west and south sides of the enclosure.

Gate on the North Side of the Fortress (Joshua 8:11)

When the spies came back from Ai they reported to Joshua that “only a few men are there” (Joshua 7:3), indicating that Ai was a small place. This is further quantified in Joshua 10:2 where it is recorded that “Gibeon…was larger than Ai.” In the Middle Bronze Age period (ca. 1800–1500 B.C.) Gibeon was ca. 7 acres in size (Broshi and Gophna 1986: 74, 82). We can assume that it was about the same size in Joshua’s day. The Late Bronze I fortress at Khirbet el-Maqatir is much smaller than Gibeon as it occupies an area less than 3 acres.

After defeating the armies of Ai and Bethel “at a certain place overlooking the Arabah [wilderness]” (Joshua 8:14) the Israelites returned to the fortress and “killed those who were in it” (Joshua 8:24). They then plundered the fortress (Joshua 8:27) and set it ablaze (Joshua 8:28). Abundant evidence that the Late Bronze I fortress was destroyed by fire, such as ash, reheated pottery, burned stones and calcined bedrock, has been found at various places on the site.

“So Joshua burned Ai and made it a permanent heap of ruins, a desolate place to this day” (Joshua 8:28). Following the destruction of the Late Bronze I fortress it was abandoned and left exposed to the elements, later scavengers and the farmer’s plow. Much of the eastern half of the Late Bronze I fortress was robbed out by the later Hasmonean builders. The western half was similarly robbed out when the Byzantine church and monastery was constructed on the summit of the hill 220 yds to the northwest. Subsequent to the Byzantine period there has been additional looting of the site. The foundation of the west half of the gate and remnants of the fortress, however, have survived. These sparse remains are visible on the surface or can be found just below the surface. Despite the plundering over the centuries, there remains a “permanent heap of ruins” at Khirbet el-Maqatir yet today.

Excavation work at Khirbet el-Maqatir between 2010 to 2016, extended far beyond the Joshua era material. As a city from the time of Jesus began to emerge from beneath two meters of accumulated debris, the finds have been stunning. After drawing the fortification system in May 2014, Maqatir excavation architect, Dr. Leen Ritmeyer, insisted that the settlement should no longer be viewed as a village, but rather as a city. It appears that he was correct. Dr. Stripling has suggested that this city may in fact be Ephraim mentioned in John 11:53-54:

“Then, from that day on, they plotted to put Him to death. Therefore Jesus no longer walked openly among the Jews, but went from there into the country near the wilderness, to a city called Ephraim, and there remained with His disciples.”

Dr. Stripling's article suggesting this identification appeared in the Fall 2014 issue of Bible and Spade.

Click here to read a copy of this article entitled "Have We Walked in the Footsteps of Jesus? Exciting New Possibilities at Khirbet el-Maqatir."