Home » People, Places, and Things from the Hebrew Bible » Seal of Jezebel Identified

The Story of Jezebel

Jezebel was no doubt the wickedest woman in the Bible. In the book of Revelation her name was invoked in condemning a false prophetess in Thyatira who promoted sexual immorality and the eating of food sacrificed to idols (Rv 2:20). Even today the name is emblematic of a sinful, shameless woman. Jezebel means "where is his highness (=Baal)?" (Korpel 2008: 37). Baal was the great Canaanite storm and fertility god. Jezebel's father Ethbaal, whose name means "with Baal" or "man of Baal," was king of the Phoenicians (I Kgs 16:31). The Jewish historian Josephus tells us that Ethbaal was formerly a priest of Ashtoreth, consort of Baal, who usurped the throne and reigned over Tyre and Sidon for 32 years (Contra Apionem i.18.123). 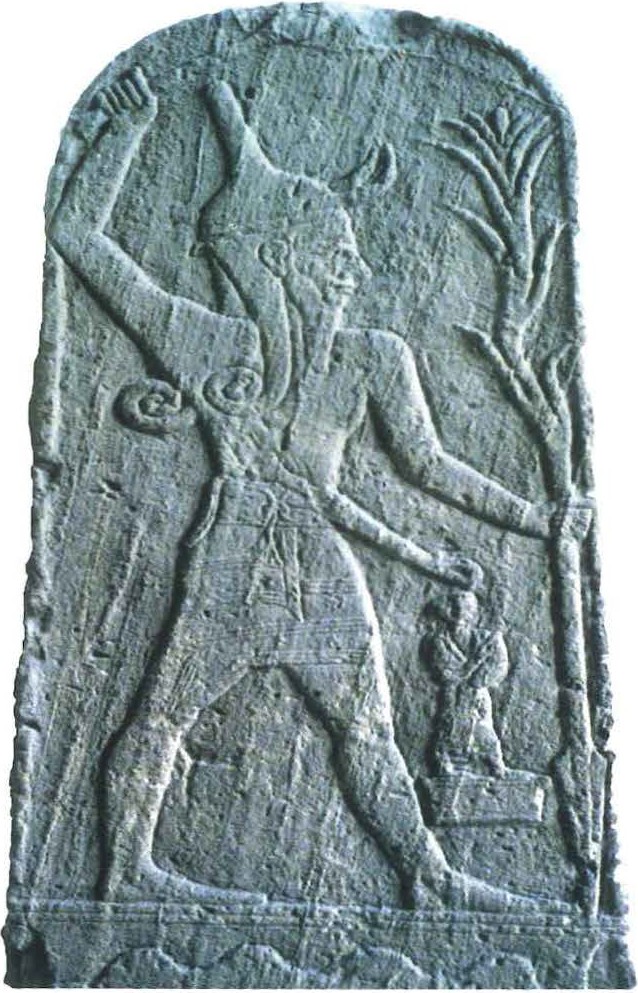 Baal the Canaanite storm god, also worshipped by the later Phoenicians. In his left hand he holds a spear which flashes lightning and in his right hand a mace. The relief, which dates to 1650- 1500 BC. wasfound in a sanctuary in the Canaanite city of Ugarit,Syria, in 1932.
It is now on display in the Louvre Museum in Paris.
Photo by: Bryant Wood

Jezebel also figures prominently in the account of the appropriation of Naboth 's vineyard. Naboth refused to sell his vineyard to greedy Ahab. Conniving Jezebel arranged to have false charges brought against Naboth, which resulted in his death (1 Kgs 21). When Ahab went to take possession of the vineyard, Elijah was there with a message from God:

"I am going to bring disaster on you. I will consume your descendants and cut off from Ahab every last male in lsrael --- slave or free ... because you have provoked me to anger and have caused Israel to sin." And also concerning Jezebel the LORD says: "Dogs will devour Jezebel by the wall of Jezreel" (1 Kgs 21:21-23). 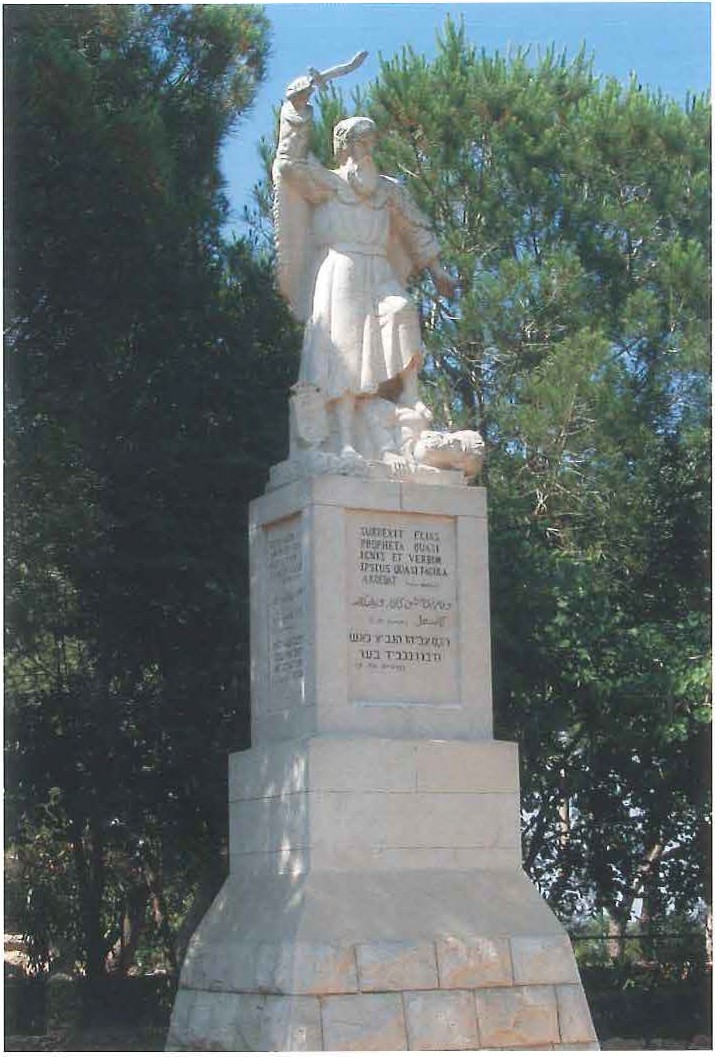 Statue of Elijah on Mt. Carmel memorializing Elijah's encounter with Jezebel's prophets.
Elijah challenged the 450 prophets of Baal who ate at Jezebel's table to a sacrifice cook-off:
"you call on the name of your god and I will call on the name of the LORD. The god who answers by fire -- he is God" (1 Kgs 18:24).
Who do you think won? You can read the account in 1 Kings 18:16-40.
Photo by: Henry B. Smith, Jr.

So they threw her down, and some of her blood spattered the wall and the horses as they trampled her underfoot. Jehu went in and ate and drank. "Take care of that cursed woman," he said, "and bury her, for she was a king's daughter." But when they went out to bury her, they found
nothing except her skull, her feet and her hands. They went back and told Jehu, who said, "This is the word of the LORD that he spoke through his servant Elijah the Tishbite: On the plot of ground at Jezreel dogs will devour Jezebel 's flesh" (2 Kgs 9:33- 36).

In the early 1960s a seal was purchased on the antiquities market and donated to the Israel Museum in Jerusalem. The late Nahman Avigad, a leading Israeli paleographer (one who studies ancient writing), published an article about the seal in 1964. He suggested the name on the seal was possibly Jezebel, but there was a problem- the first letter of the name was missing. And so, little attention was paid to the seal and it languished in the Israel Museum for decades. Then, Dutch researcher Marjo Korpel (Associate Professor of Old Testament, Utrecht University, Utrecht, The Netherlands) became interested in it. Korpel was first drawn to the seal because of its imagery, but then became intrigued with the inscription. She noticed that a piece had broken off at the top and this could very well have been where the missing letter was originally located. She conjectured that there were initially two letters in the area of the break: a Hebrew lamed, or L, which stood for "(belonging) to" or "for," and the missing first letter of Jezebel's name.

Collection of the Israel Museum, Jerusalem. Photo copyright: The Israel Museum Opal seal with the name of Jezebel.
The inscription and symbols on the seal make it highly likely that it was the official seal of the wicked woman of the Old Testament.
She was a woman of power as indicated by her title "Queen Mother" (2 Kgs 10: 13). Although Jezebel had her own seal to authenticate official correspondence, when she forged the letters to the elders and nobles of Jezreel in order do away with Naboth and seize his vineyard, she used Ahab's seal rather than her own for maximum authority (1 Kgs 21 :8).

Apart from the inscription, there are other compelling reasons for identifying the seal as that of Jezebel. First, as Avigad observed, it is very fancy, suggestive of royalty. It is made of the gemstone opal and is larger than average, being 1.24 in (31 mm) from top to bottom (Avigad 1964: 274). Secondly, the form of the letters is Phoenician, or imitates Phoenician writing (Korpel 2008: 37). Thirdly, the seal is filled with common Egyptian symbols that were often used in Phoenicia in the ninth century BC and are suggestive of a queen. At the top is a crouching winged sphinx with a woman's face, the body of a lioness and a female lsis/Hathor crown. To the left is an Egyptian ankh, the sign of life. In the lower register, below a winged disk, is an Egyptian-style falcon, symbol of royalty in Egypt. On either side of the falcon is a uraeus, the cobra representation of Egyptian royalty worn on crowns. At the bottom left is a lotus, a symbol often associated with royal women. All of these icons taken together denote female royalty (Korpel 2008: 36- 37).

Although 100% certainty cannot be attained, Korpel's assessment of the evidence leads her to conclude, "I believe it is very likely that we have here the seal of the famous Queen Jezebel" (2008: 37). 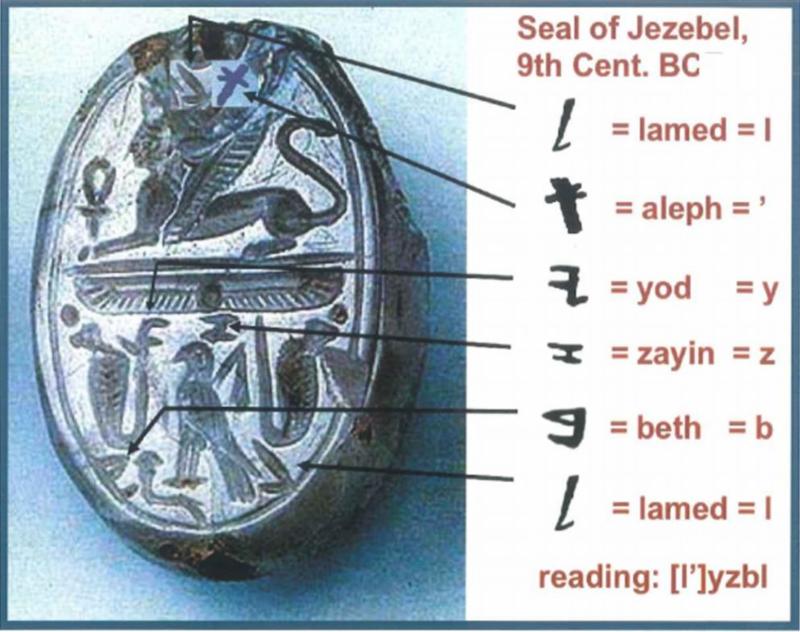 Seal of Jezebel with missing letters restored. The top of the seal has been damaged and it is in this area that Old Testament scholar Marjo Korpel suggests that there were originally two letters: a lamed, meaning "(belonging) to" and an aleph, the first letter of Jezebel's name. The restored inscription would then read "(belonging) to Jezebel." The seal is scheduled to go on display at the Israel Museum in Jerusalem in 2010 when renovation work at the museum is completed.
Photo by: Utrecht University

This article was updated in June 2019.