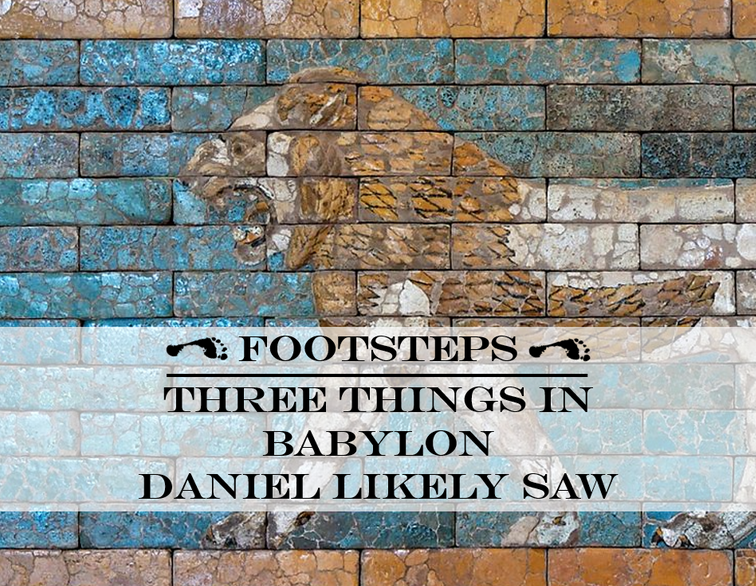 In 605 BC, Nebuchadnezzar II, King of Babylon, attacked Jerusalem and took as captive some of the royal family and nobility.  Among these exiles was a group of young men named Daniel, Hananiah, Mishael, and Azariah (Dan. 1:6).  They were taught the language and ways of the Babylonians to prepare them for service in the King’s courts (Dan. 1:4).  For the next 65+ years in Babylon, Daniel lived in Babylon through the reigns of successive Babylonian Kings and into the reign of the Persian King, Cyrus (Dan. 1:21;6:28) in 539 BC.

Babylon was a spectacular city!  Nebuchadnezzar had initiated a vast building program and improved the city’s fortifications, raising its magnificence to new heights.  At the time Daniel lived there, it was the largest city in the world, covering over 10 square kilometers (4 square miles).1 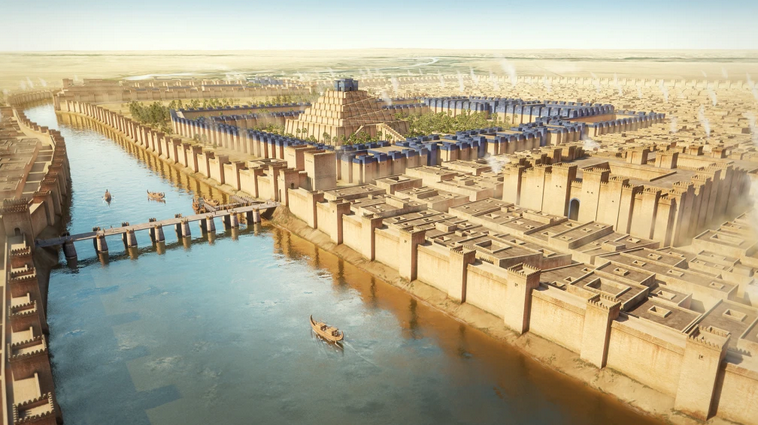 Credit: J.R. Casals | https://www.artstation.com/artwork/25NVv | Used by permission of the artist
A reconstruction of ancient Babylon, with the Etemenaki (stepped ziggurat) in the center, and the Esagila (Temple of Marduk) to the right of it.

Serious investigation of the ruins of Babylon began in the late 1800’s, first with industrial-scale digging by the British Museum from 1879-1882, and then with systematic and scientific excavations led by Robert Koldewey of the German Oriental Society.2  Over the course of 18 seasons, Koldewey excavated numerous parts of the city, including the Ishtar Gate, the Processional Way, which led to the Temple of Marduk, and the palaces of Nebuchadnezzar.  Here are three things which Koldewey unearthed that Daniel would have seen in Babylon.

The Palaces of Nebuchadnezzar 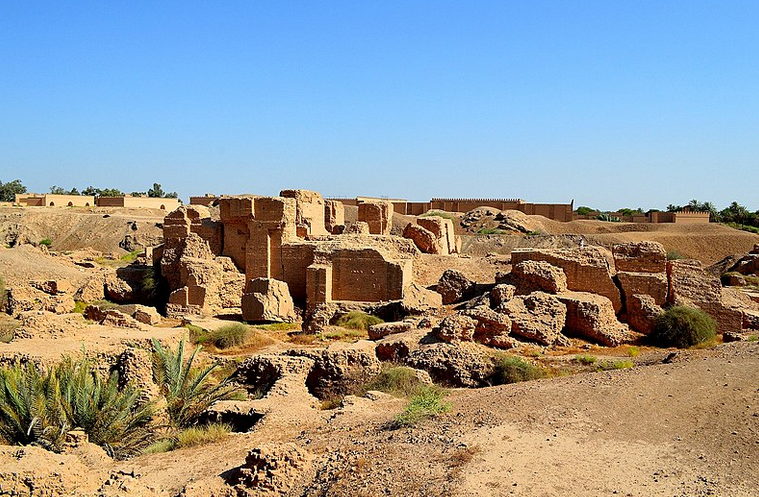 At the end of their time of training, Daniel and his friends were presented to King Nebuchadnezzar (Dan. 1:18); this undoubtedly took place in his palace.  Daniel came before Nebuchadnezzar numerous times in his service to the king (Dan. 2:25; 4:8), and thus, was likely very familiar with both the Northern and Southern palaces in Babylon.

Nebuchadnezzar was a prolific builder and left numerous inscriptions about his building projects.  In one inscription, he describes how he rebuilt the palace of his father:

I tore down its walls of dried brick, and laid its corner-stone bare and reached the depth of the waters. Facing the water, I laid its foundation firmly, and raised it mountain high with bitumen and burnt brick.  Mighty cedars I caused to be laid down at length for its roofing.  Door leaves of cedar overlaid with copper, thresholds and sockets of bronze I placed in its doorway.  Silver and gold and precious stones, all that can be imagined of costliness, splendor, wealth, riches, all that was highly esteemed I heaped up within it, I stored immense abundance of royal treasure within it.3

In 1987, Saddam Hussein ordered the Southern Palace of King Nebuchadnezzar to rebuilt on top of the remains of ancient building. No regard was given to the archaeological past which he was erasing.  In his hubris, Hussein had the new structure built of brinks inscribed with both his name and that of Nebuchadnezzar.4 Thankfully, the remains of the Northern Palace are largely undisturbed.

The Temple of Marduk 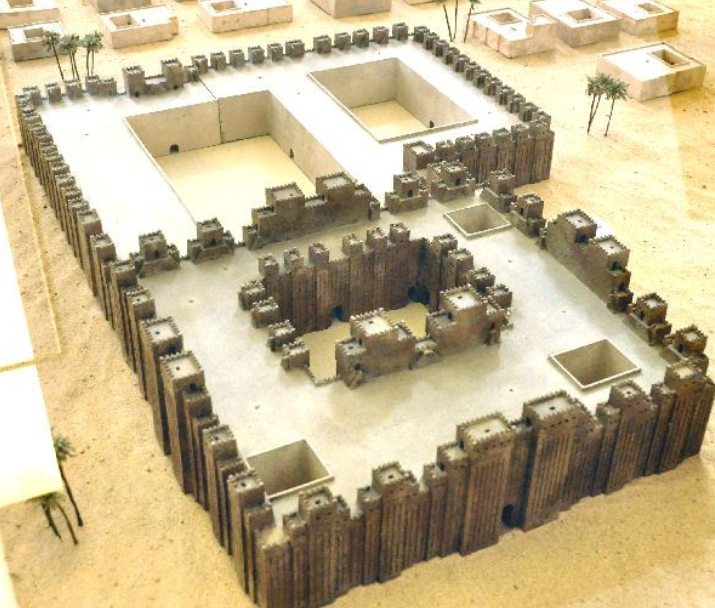 Credit: Jona Lendering | CC0 1.0 Universal | https://www.livius.org/pictures/iraq/babylon/esagila-model/
A model of the Esagila, the Temple of Marduk, on display at the the Pergamon Museum in Berlin.

Two great structures dominated the center of the ancient city of Babylon: the Temple of Marduk, called the Esagila, and the great ziggurat, called the Etemenanki.5 When Koldewey excavated the Esagila in the early 1900’s, he discovered numerous inscriptions about the rebuilding of the Temple.  Nebuchadnezzar, who called himself the “fosterer of Esagila” claimed, “My heart impels me to build Esagila” which he described as “the chamber of Majesty, the chamber of the lordship of the wise one among the god, the exalted Marduk.”6 Nebuchadnezzar boasts: “Silver, gold, costly precious stones, bronze, mismakannu – and cedar wood, all conceivable valuables…as sumptuous gift, I brought to my city of Babil before him and deposited in Esagila, the palace of his lordship, a gigantic abundance.  Ekua, the chamber of Marduk, lord of the gods, I made to gleam like the sun.”7

This description takes on interesting significance in light of the biblical account of Nebuchadnezzar taking the vessels from the Temple in Jerusalem and bringing them to the “house of his god” and placing them in the “treasury of his god” (Dan. 1:2).

Scholar, John C. Lennox, writes, “It may well have been in the Esagila temple complex that Nebuchadnezzar had his treasure house.  It was presumably much like a museum, with suites of rooms containing innumerable beautiful and valuable artifacts – the very best of the “tribute” (booty, really!).”.8  When Cyrus, King of Persia, later gave the treasures from Yahweh’s temple back to the Jewish people, a count revealed 5400 objects of gold and silver (Ezra 1:11). 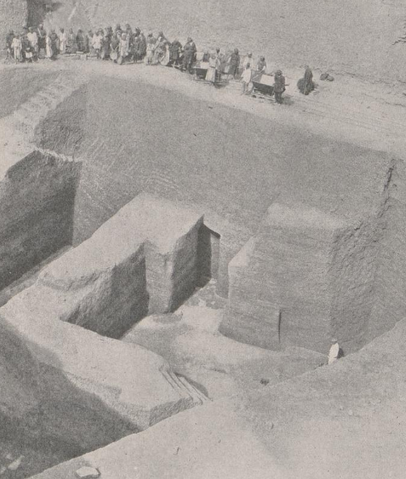 Credit: From Robert Koldewey’s 1914 book The Excavations At Babylon
Excavations of the Esagila.

How many times must Daniel have been grieved as he walked past the Esagila knowing that the vessels from the Temple of Yahweh in Jerusalem were being held in this pagan temple?

On the north side of the city, Nebuchadnezzar built the famed Ishtar Gate.  It was one of eight double-gates that served as entrances to the city and stood over 12m (38 feet) high.  An inscription discovered at the gate reads, “I dug out that town gate, I grounded its foundations facing the water strong with bitumen and baked bricks, and caused it to be finely set forth with baked bricks of blue enamel, on which wild oxen and dragons (sir-rus) were pictured.  I caused mighty cedars to be laid lengthways for its ceiling.  Door leaves of cedar covered with copper, thresholds and hinges of bronze I fitted into its gates.  Lusty (?) wild oxen of bronze and raging (?) dragons I placed at the thresholds.  The same town gateways I caused to be made glorious for the amazement of all peoples.”9 The gate was finished around 575 BC10, after Daniel had had already been living in the city for many years.  He no-doubt watched its construction and marveled at its beauty. 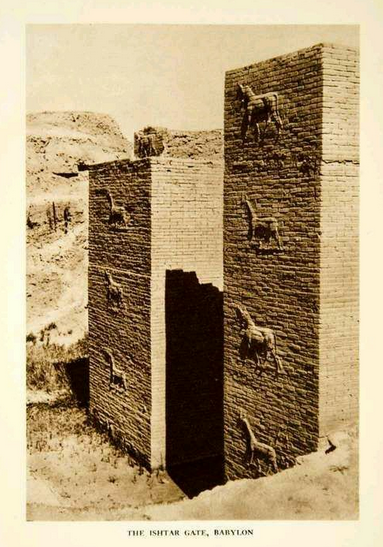 Today, a reconstruction of the Ishtar Gate can be seen at the Pergamon Museum in Berlin.  It is made out of materials excavated by Robert Koldewey in the early 1900’s. 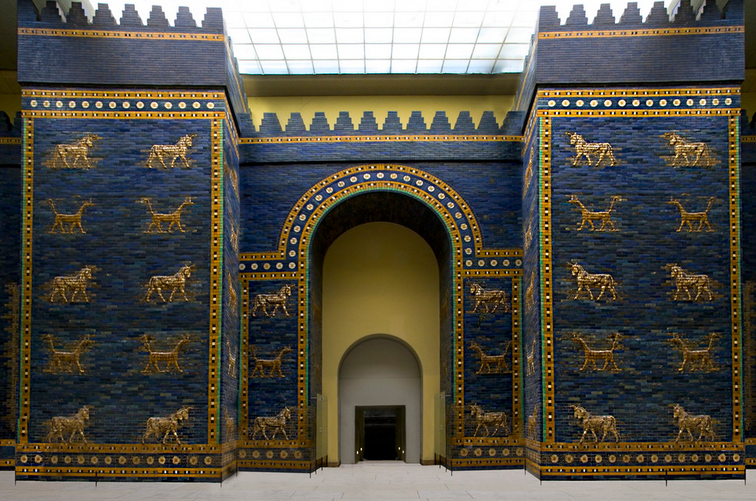 Credit: flickr photo by youngrobv | CC BY-NC 2.0
A reconstruction of the Ishtar Gate at the Pergamon Museum in Berlin, Germany.

In Daniel 4:30, King Nebuchadnezzar boasts, “Is not this great Babylon, which I have built by my mighty power as a royal residence and for the glory of my majesty?”  The archaeological record affirms the massive building campaigns of Nebuchadnezzar.  Literally, millions of bricks were unearthed with his name inscribed on them.  The Nebuchadnezzar of the Bible and the Nebuchadnezzar of history are one and the same.  Similarly, the biblical city of Babylon that Daniel lived in is consistent with the city Babylon uncovered in archaeology.

A final note on the authenticity of the book of Daniel: some scholars today do not believe the book of Daniel was actually written by its namesake who lived in the 6th Century BC (as the book claims in 9:2 and 10:2), but rather it was written by someone hundreds of years after Daniel, during the time of the Maccabean revolt (ca. 165 BC) in order to encourage the rebels. This position is usually held by those who discount the supernatural elements within the book: the stunning accuracy of the prophecies made, and the miraculous events that occur.  However, there is good reason to believe that the book was written in the 6th century and contains the words of the Hebrew exile, Daniel.  In a Bible and Spade article, Dr. Gerhard Hasel, points out that there are no fewer than eight manuscripts of Daniel among the Dead Sea Scrolls, including one dating to the 2nd Century BC.  The early date of this manuscript and the fact that Daniel was already accepted as canonical by the Qumran community suggest a date that is much earlier than the second century BC.  The article concludes, “there can no longer be any possible reason for considering the book as a Maccabean product.”11 Moreover, the knowledge of details of Babylonian culture and the courts of the kings suggest that it was written close to the time of the events described.  Finally, Jesus himself affirmed that the words in the book were spoken by the prophet Daniel (Matt. 24:15).

8 John C. Lennox, Against The Flow: The Inspiration of Daniel in an Age of Relativism. (Grand Rapids: Monarch Books, 2015), 33.