Away in a Manger, But Not in a Barn: An Archaeological Look at the Nativity

Of the four Gospels, only two discuss events surrounding the birth of Jesus. Matthew tends to focus on Joseph with events before the birth (Matthew 1) and afterwards (Matthew 2). Luke, on the other hand, focuses on Mary (Luke 1) discussing events before His birth (Luke 2) as well as those following (Luke 2). It is also in Luke 2 where were read what happened the day Jesus was born.

Bethlehem for the First Christmas

As a descendant of King David, Joseph journeyed to his ancestral home in Bethlehem, with his espoused wife, Mary, to participate in a mandatory Roman census (Luke 2:3). In the ancient Near East, a family’s historic ties to their hometown were of upmost importance. Being a member of the royal family of David, it is not unlikely that space within the family’s ancestral home would have been made available for Joseph and Mary upon their arrival in Bethlehem. Even in Roman times, the Davidic connection to Bethlehem was so strong that it was still known as the “city of David" (Luke 2:4, 11). 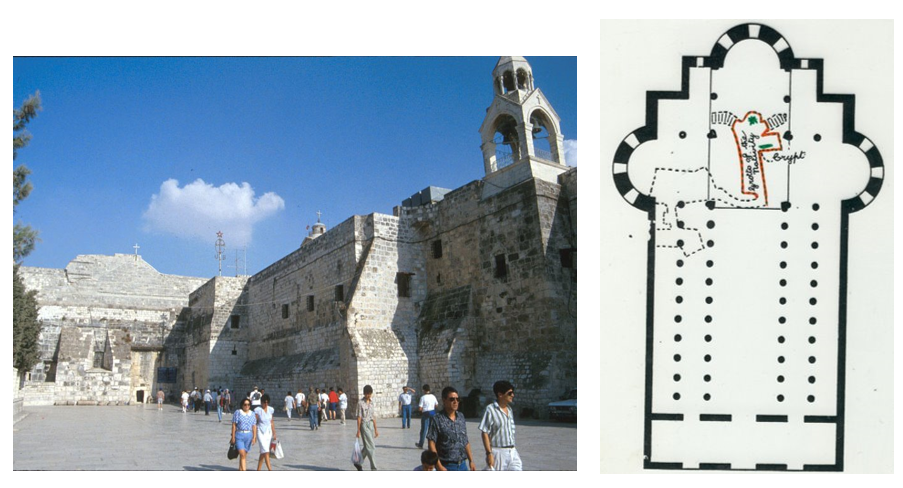 Photo Credit: Michael Luddeni; plan by Gustaf Dalman (1935). Sacred Sites and Ways: Studies in the Topography of the Gospels. London: Society for Promoting Christian Knowledge
While a cruciform structure facing east today (as constructed by Justinian in 530 AD) the original Church of the Nativity, dedicated by Constantine in 339 AD, was octagonal in form with the Nativity Grotto beneath the chancel. It was built over a cave which had a tradition dating back to the middle of the 2nd century AD identifying it as the place where Jesus was born. Because of the continuous occupation of the immediate area, the confines of New Testament Bethlehem are not known, although it is believed the church does sit within what would have been the walled Old Testament city. Because of the minimal evidence in the biblical text, it is impossible to say that this is the location. If so, the cave could have been used as an underground domestic stable – although not a common situation. In the photo, the small opening at the base of the wall in the lower left is the entrance to the western end of Constantine’s cruciform church. The grotto is beneath the chancel on the eastern end.

Mary’s situation as Joseph’s espoused wife and also being close to giving birth (Luke 2:6) probably did not deter a son in the direct line of King David from having appropriate accommodations made available – especially assuming Joseph explained what God had been doing in their lives (Luke 1, Matthew 1). As Luke noted earlier, Mary also had priestly relatives nearby in the "hill country of Judea" (Luke 1:39) and it is not unreasonable that appropriate alternative arrangements could have been made available there, if necessary.

Although no barn is mentioned in the text, the "manger" (phatna) is prominent (Luke 2:7, 12, 16). Obviously, wood-constructed mangers like we know from our Nativity would not survive for modern archaeologists to find, but stone-carved and plaster-lined mangers are known from excavations to be on the ground floor of domestic structures in Israel throughout biblical times (see I Samuel 28:24; Judges 11:31; Luke 13:15). Historians and anthropologists have also noted the practice of keeping animals in the house among a variety of cultures down through history. While flocks were kept in sheepfolds out in the fields (see Luke 2:8), valuable or vulnerable animals – ox, donkey, sick or pregnant sheep and goats – would be brought into the house’s ground floor domestic stable. In such a location baby Jesus would have been laid in a manger. 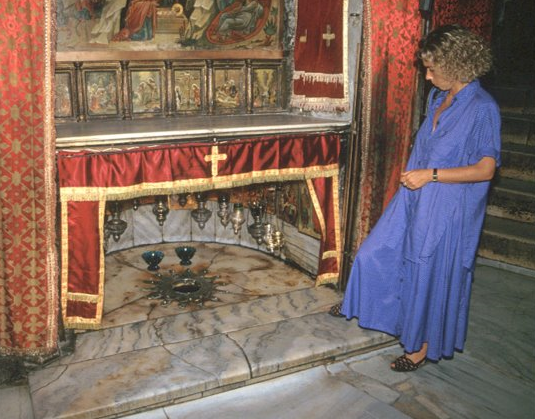 Photo Credit: Michael Luddeni
Behind the woman on the right is the set of stairs usually designated for people to take from the ground floor of the Church of the Nativity down to the Grotto of the Nativity, directly below the chancel. While a natural cave, it has been “beautified” over the centuries with marble flooring and tapestries. On the floor of a space that makes me think of a "fireplace" is the ‘Star of Bethlehem’, a 14-point silver star marking the traditional location where Jesus was born. Behind the woman, and to the right of the stairway, is the Chapel of the Manger where, by tradition, the manger was located.

Luke records, "there was not room for them in the inn" (kataluma Luke 2:7). The only other New Testament reference to kataluma was the upper chamber “guest room” of a Jerusalem house where the Last Supper was held (Luke 22:11 – along with its parallel in Mark 14:14; ESV, NIV, NASB, NKJV). There is no reason why Luke’s use of kataluma in 22:11 (“guest room”) on the last night of Jesus’ life should be different from his use of the same term in 2:7 (“inn”) on the first night of His life. In fact, there may even be some symbolism with these “guest rooms” serving as bookends to His life and ministry. There was no room for Him in a kataluma on the first night of His life and He presided over a meal (probably a Passover meal) in a kataluma on the last night of His life.

Luke’s statement “no room for them in the inn," suggests the “guest room” of the house where Mary and Joseph were now staying was already full. The NIV’s 2011 revision acknowledged this fact, changing “inn” to “guest room” (2:7). It may well be that older relatives were already settled there and/or Mary preferred not climbing to an upper floor or appreciated a bit more privacy in the domestic stable below. 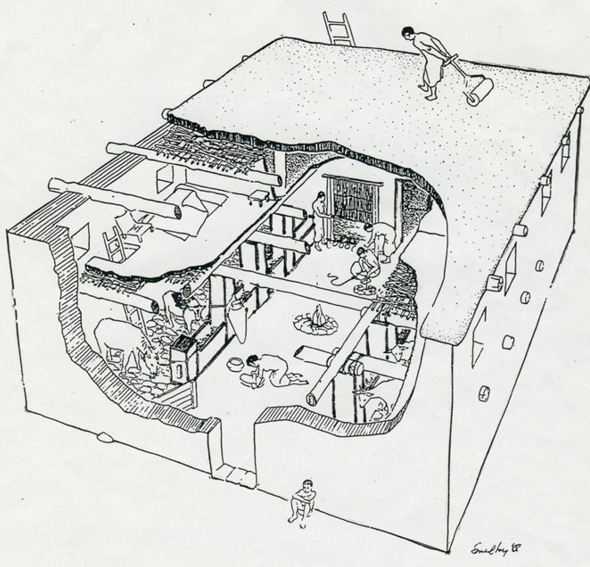 Photo Credit: Larry Stager 1985. The Archaeology of the Family in Ancient Israel. Bulletin of the American Schools of Oriental Research 260: 1-36
A traditional Israelite “four-room” house which became a standard house plan during the Iron Age in Canaan – from the 10th century (United Monarchy) to the beginning of the 6th century BC (Babylonian exile of the Kingdom of Judah). While not always four rooms, there was a general plan of a main entrance in one of the two short walls of the house – typically opening into a courtyard (likely unroofed). From one to three long rooms extended from that short wall to a rear broad room which extended the full width of the house. The long rooms are typically divided from each other by lines of stone pillars or wooden post on stone bases. There may have been low curtain walls between the pillars, sometimes including mangers -- as pictured in the drawing's left and right side rooms. While kept in these some rooms at night, animals would generally be taken out during the day. The second floor room in this drawing would be representative of the upper "guest room" (kataluma) in the Christmas story (Luke 2:7).

Additionally, Luke knew what a public inn was, using that term in the account of the Good Samaritan at an "inn" (pandocheion; 10:34) with an "innkeeper" (pandocheus; 10:35). His use of kataluma in the nativity account indicates a different space than a public inn – the “guest room” of a domestic home (likely within an upper story) and, I suggest, within the same house where the phatna (“manger”) was in the ground floor domestic stable.

Thus, Luke’s nativity account references neither a barn nor any statement made by an innkeeper, nor even the mention of an innkeeper. I will suggest that the story did not have a public “inn” either! Instead, we should think of that first Christmas with baby Jesus placed in a manger on the ground floor of David’s ancestral home in Bethlehem because the upstairs “guest room” was already full.

While His Heavenly Father could orchestrate events any way He chose, I propose that baby Jesus did not spend that first Christmas with Mary and Joseph alone in the barn of a public building there in Bethlehem but in a domestic stable surrounded by family. Family has always been important to God (I John 1:3; 3:10) and He wants us all to be connected to our biological family – or, if that’s not possible or reasonable, to our spiritual family (see Matthew 12:46-50). Even this Christmas He wants His children connected with their families – biological or spiritual. So, this year let's try to do it like the first Christmas -- spending some time with our families (biological and/or spiritual), too!

Kenneth Bailey 1979. The Manger and the Inn: The Cultural Background of Luke 2:7. Theological Review of the Near East School of Theology, Vol 2, No II: 33-44.

Larry Stager 1985. The Archaeology of the Family in Ancient Israel. Bulletin of the American Schools of Oriental Research 260: 1-36.