“In those days Caesar Augustus issued a decree that a census should be taken of the entire Roman world.  (This was the first census that took place while Quirinius was governor of Syria.) And everyone went to his own town to register.” (Luke 2:1-3)

While he is only mentioned once in Scripture, Caesar Augustus plays a pivotal role in the account of the birth of Jesus of Nazareth.  Unbeknownst to him, when Augustus issued a decree that the census be taken, he was helping fulfill a prophecy written 600 years earlier, that the Messiah would be born in Bethlehem (Micah 5:2).

Born Gaius Octavius, he was adopted by Julius Caesar, his great uncle, and named his chief personal heir. As was the case with adult Roman adoption, Octavius took the name of his adopted father, becoming Gaius Julius Caesar Octavian. When Julius Caesar died in 44 BC, Octavian, Marcus Antonius (Mark Antony) and Marcus Aemilius Lepidus were granted the ruling powers of the Second Triumvirate in the reorganized empire.1 This was followed by much political intrigue and infighting during which Octavian eventually defeated Mark Antony and Cleopatra at the Battle of Actium.  After Mark Antony and Cleopatra fled to Egypt and committed suicide, Octavian eventually secured his power and became Caesar; the name Augustus -“revered one” – was given to him by the Roman Senate in 27 BC.2  Caesar Augustus skillfully ruled his new autocratic republican regime, known as the principate, and ushered in the Pax Romana, a period of relative peace throughout the Roman empire.3

The Censuses of Caesar 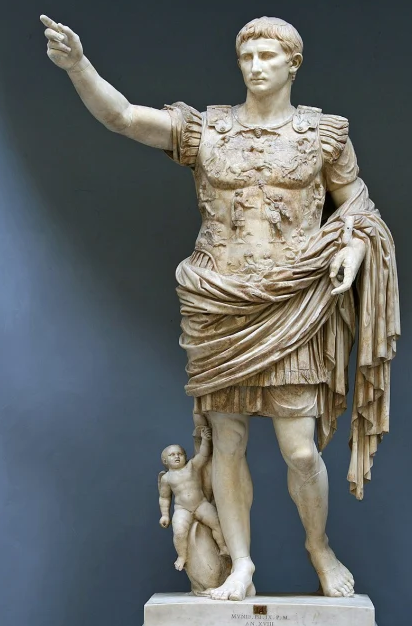 One of the most important inscriptions from the Roman era is the Res Gestae (Acts or Achievements) of Augustus.  It is an autobiography in which Augustus describes his achievements.  In his will, he left instructions that, upon his death, his Res Gestae be displayed in front of his Mausoleum in Rome on two bronze pillars.4  The bronze inscription has not survived, but fragments of four copies have survived:

In his autobiography, Augustus describes taking a census of the Roman empire on several occasions: 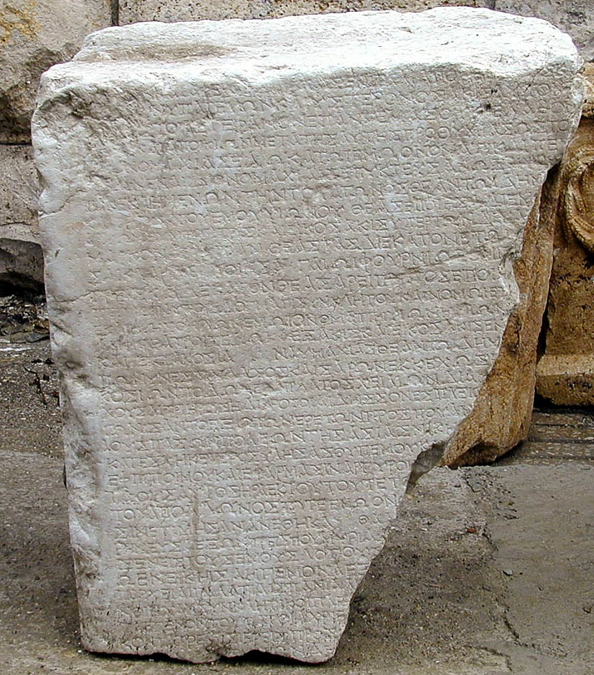 Credit: Todd Bolen | Bibleplaces.com
This Res Gestae (Acts of Augustus) inscription is on display in the Yalvac Museum near Pisidian Antioch in Turkey.

Caesar Augustus also records another event of interest: “While I was administering my thirteenth consulship the Senate and the equestrian order and the entire Roman people gave me the title of Father of my Country…”7  Josephus appears to reference this event in his work Antiquities of the Jews, where he states, “When all the people of the Jews gave assurance of their good will to Cæsar, and to the King’s government; these very men [Pharisees] did not swear: being above six thousand.”8   Some scholars have theorized that there was an empire-wide registration associated with this event.9  A census, or registration of some kind, would explain how Josephus knew there were 6000 pharisees who refused to take the oath to Caesar.

What does all this mean?  Some have attempted to pinpoint the exact census that Luke refers in dating the birth of Christ.  Each suggestion is based, in part, on some speculation as the picture is far from complete.  It could be that an empire-wide census would take years to complete.  Thus, the census that was begun in 8 BC may be the census that Luke has in mind, if Jesus was born around 6 BC (assuming one accepts the consensus view that Herod died in 4 BC).  Others point to a possible registration when people in the Roman empire swore an oath to Caesar calling him “Father my country.”  It has been noted that the fourth-century historian, Orosius, suggests the census Luke refers to was the one in which all great nations took an oath of loyalty to Caesar and were “made part of one society.”10  This would have occurred around 2 BC and might also fit into the time frame of Christ’s birth (if one accepts the minority view that Herod died in 1 BC).  Either way, the biblical account of a census ordered by Caesar Augustus is consistent with the type of registrations history records that he decreed and there are at least two possible registrations to which Luke may refer.

The Objections of Critics

Critics have questioned whether Caesear would ever imposed a census or tax on independent client kingdoms, such as Judea was at the time of Jesus’ birth.  After all, it is argued, Herod had the right to mint his own coins and collect his own taxes.  However, the Aemilius Secundus inscription describes a census that was conducted by a Roman official under the orders of P. Sulpicius Quirinius in Apamea, an independent city-state that minted its own coins.11  In 36 AD, Tiberius ordered a census of the client-kingdom of Archelaus of Cappadocia.12  Moreover, Josephus notes that when Herod’s kingdom was divided among his three sons, “The country of Samaria paid tribute to Archelaus, but had now a fourth part of that tribute taken off by the order of Cæsar, who decreed them that mitigation, because they did not join in this revolt with the rest of the multitude.”13  It certainly appears that Roman emperors exercised their authority at times to impose a census and alter taxes of independent client kingdoms in the empire.

Another objection is that Rome would not have required people to return to their ancestral homes, as described in the biblical account.  However, surviving census information from Egypt, a Roman province at the time, indicate that this may have been the common practice. For example, British Museum Papyrus 904 (ca. 104 AD) contains a decree from the Prefect, Gaius Vibius Maximus, that, “all those who for any cause whatsoever are residing outside of their provinces [are] to return to their own homes” for a census.14 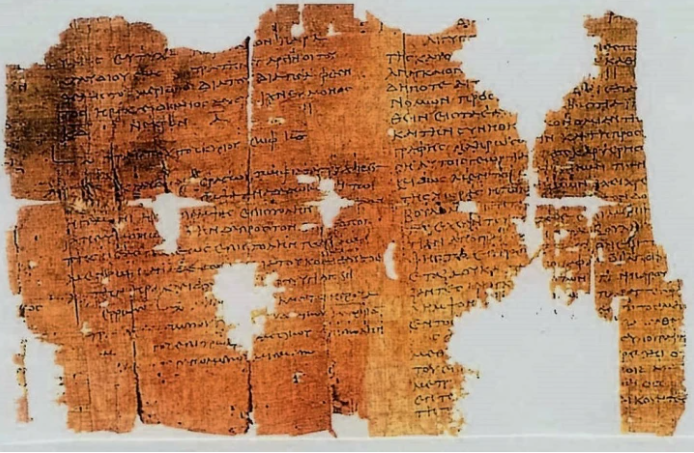 Credit: Courtesy of the Trustees of the British Museum Library
Papyrus 904 -- A Roman Census Edict from Egypt.

A final objection is that Luke is in error.  Josephus mentions a census which he associates with Quirinius’ arrival in Syria to depose of Archelaus’s money (ca. 6 AD), which led to a tax revolt led by a man named Judas.15 Many critics believe that Luke has conflated these two events, mistakenly thinking that the census ordered by Caesar Augustus in 6 AD when he sent Quirinius into Syria took place years earlier when Jesus was born.  Two responses have been made that answer this objection.  First, many scholars note that Luke was well-aware of the census of 6 AD, and mentions it in Acts 5:37: “…Judas the Galilean appeared in the days of the census and led a band of people in revolt. He too was killed, and all his followers were scattered.”  This is why Luke explicitly states that “This was the first census that took place while Quirinius was governor of Syria” (Luke 2:2, emphasis added).  Critics will then respond that there is no definitive evidence for an earlier census administered by Quirinius.  This, however, is an argument from silence; in archaeology we ought to follow Kenneth Kitchen’s maxim: the absence of evidence is not the evidence of absence.  A more recent response to this objection has been made by scholars who have noted inconsistencies in the way Josephus records these events in his two works, Antiquities of the Jews and The Jewish War.  They suggest that it is actually Josephus who has mis-dated the census, not Luke.16  Regardless, there are plausible alternatives to these objections.

When we step back and analyze the historical evidence, we can see that the biblical description fits with what is known about the types of censuses that were ordered by Caesar Augustus.  While our knowledge of the political situation in the Roman empire around the time of Christ’s birth is incomplete, and we may not be able to pinpoint the exact registration that Luke is referring to with certainty, the account in Scripture is consistent with the accounts of Caesar Augustus ordering censuses, as recorded in other historical sources.

One final note: we will address the issue of the census again in our next bioarchaeography, as we study the life of Quirinius.