The Incarnation is at the heart of the Christmas message. The Apostle Paul wrote to Timothy, 'And without controversy great is the mystery of godliness: God was manifest in the flesh' (1 Tm 3:16). The only way the Second Person of the triune God could take on human flesh without being tainted by Adam's sin was to be conceived by the Holy Spirit and born of a virgin...

What is one of the greatest proofs of the inspiration and inerrancy of the Scriptures?

I believe that fulfillment of Bible prophecy is one of the greatest proofs that the Bible is true. Over and over again the Old Testament prophets predicted certain events in the life of the Lord Jesus hundreds of years before they happened. For example, Daniel foretold the time of His death (9:26), Micah predicted He would be born in Bethlehem (5:2), Psalm 22 described His crucifixion, Psalm 16 His resurrection and Isaiah 53 gave the reason for His death: to pay for all our sins.

Does the Bible predict His virgin birth?

Yes, Matthew records the fulfi llment of that in his first chapter where he quotes Isaiah 7:14, ''Behold, a virgin shall be with child, and bear a Son, and they shall call His name Immanuel,' which is translated, 'God with us'' (vs. 23).

Some have charged Matthew with 'proof-texting' because he has taken that verse out of its historical context. Is that the case?

No, quite the contrary. If one understands the historical context of the entire chapter it only enhances the identity of Immanuel as the Lord Jesus Christ.

King Ahaz, whom Isaiah is addressing, reigned in Judah during the second half of the eighth century BC. What would the historical context be and how would this relate to the Lord Jesus?

The events of the life of King Ahaz are recorded in 2 Kings 16 and 2 Chronicles 28 as well as Isaiah 7:1-14:28. Around 734/733 BC, Ahaz was having problems with his neighbors to the north. Israel, with its capital in Samaria and ruled by Pekah, and Syria, with its capital in Damascus and ruled by Rezin, wanted Ahaz to join a coalition of nations to fight the 'super power' of that day, Assyria, ruled by Tiglath-pileser III. Ahaz was not a godly or spiritual man, but he was politically smart. He knew that this coalition could not stand up against the mighty Assyrian army, so he declined the invitation. 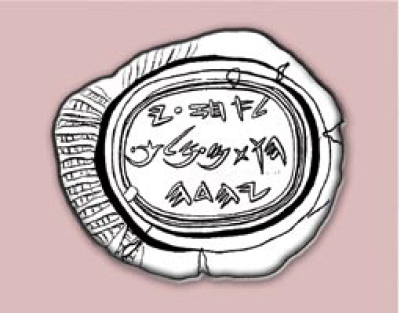 Seal of Ahaz, king of Judah in the south. 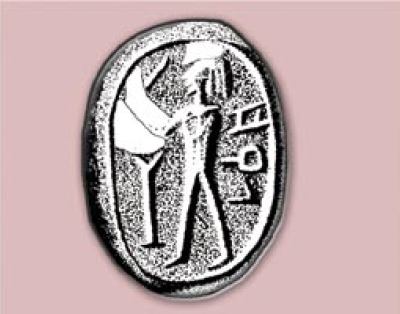 Seal of Pekah, king of Israel in the north.

In order to get Judah to join the coalition, Pekah and Rezin hatched a plot to overthrow Ahaz and put a puppet king,' one of the sons of Tabeel, on the throne. In order to carry out this coup d'etat, Syria deployed troops in Samaria. Ahaz got wind of this plot and began to 'shake in his boots.' He started to make secret overtures to the Assyrian king to get Pekah and Rezin off his back. His trust was in Tiglath-pileser III and not the Lord.

The Lord sent Isaiah and his son to meet Ahaz and to encourage him to rely only upon the Lord in this time of distress. The Lord instructed Isaiah to say that Pekah and Rezin are 'two stubs of smoking firebrands'; in other words, they are nothing but 'hot air'! I am sure that this instruction did not sit well with Ahaz, so the Lord, through Isaiah, predicted that in 65 years, Samaria would be broken (cf. Ezr 4:2). At the end, he warns Ahaz that if he does not trust the Lord, 'surely you shall not be established.' This summary depicts the historical context of Isaiah 7:1-9.

That was helpful, but what does that last phrase 'surely you shall not be established' mean?

The answer to that question lies in the Davidic Covenant. The phrase 'shall not be established' refers back to this covenant recorded in 2 Samuel 7 and 1 Chronicles 17. God promised David, in an unconditional covenant, that one of his descendants would sit upon the throne of David forever in Jerusalem. At the end of the covenant, God says 'And your house and your kingdom shall be established forever before you, Your throne shall be established forever' (2 Sam 7:16).

The prophecy of Isaiah 7 was based on the Davidic covenant. If Pekah and Rezin successfully overthrew Ahaz and the House of David and placed one of the sons of Tabeel on the throne, the Davidic line would be wiped out and God could not fulfill His promise to David; i.e., the Lord Jesus would never have been born. But God is faithful to His promises. The angel Gabriel had this covenant in mind when he announced the conception of the Lord Jesus to a virgin named Mary. He said, 'And behold, you shall conceive in your womb and bring forth a Son, and shall call His name JESUS. He will be great, and will be called the Son of the Highest; and the Lord God will give Him the throne of His father David. And He will reign over the house of Jacob forever, and of His Kingdom there will be no end' Lk 1:31-33).

The Lord seems to imply that Ahaz is a believer in verse 11 when He challenges him to 'Ask a sign for yourself from the LORD your God,' a sign that could strengthen his faith in the Lord. But Ahaz responds piously, using the language of Scripture that he would not (v. 12). He reasoned thus, if he saw the sign, he would have to respond in a positive way to the Word of God. He would have to trust the LORD and not Tiglath-pileser III, something he did not want to do. Ahaz had a very high opinion of himself. He thought he was indispensable to the plan of God. 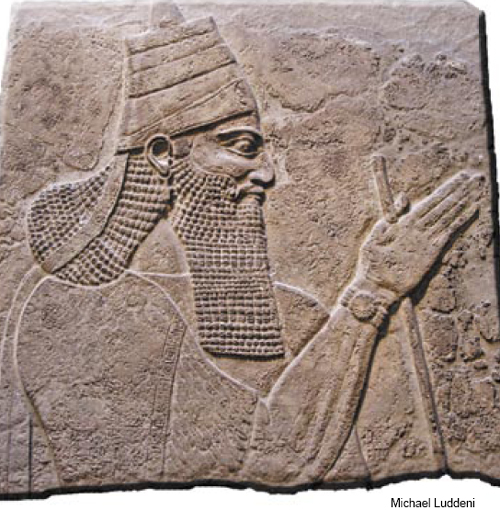 Tiglath-pileser III. King of Assyria, the super power of the day, he ruled from 745-727 BC. King Ahaz rejected the Lord and sought help from him. 'I am your servant and son' he wrote the Assyrian king, pleading for help against Israel and Syria.

No, Isaiah said he was not. In verses 13 and 14, Isaiah turns to the House of David and says, 'Hear now, O house of David! Is it a small thing for you to weary men, but will you weary my God also? Therefore the Lord Himself will give you a sign.' The word 'you' in verse 14 is second person plural. In other words, he is no longer talking to Ahaz, but the whole House of David. As I understand the chronology of this period, the teenage Prince Hezekiah is alive and well in the courts of the House of David. The sign of the virgin-born son, Immanuel, was directed primarily toward him in order to encourage him to trust the Lord. A few years later, when he came to the throne, he had a great revival in that first year. His trust was only in the Lord.

What is the Hebrew meaning of the word 'virgin' in Isaiah 7:14?

Interestingly, in the third century BC, seventy Jewish scholars got together in Alexandria, Egypt, and translated the Hebrew Bible into the Greek language. This translation, called the Septuagint, was for those Jewish people living in the Diaspora, or outside the Land of Israel, who spoke only Greek. When they came to the word almah, they translated it parthenos which is at the root of the word 'parthenogenesis' that means 'development of an egg without fertilization.' They understood the word to mean a virgin.

Does Isaiah say anything more about Immanuel in this passage?

He continues, 'For before the Child shall know to refuse the evil and choose the good' [that is, before He was born], 'the land that you dread (Samaria) will be forsaken by both her kings' (7:16). To put it another way, after the defeat of Pekah and Rezin, Immanuel would be born. How long after that time, Isaiah did not know. He did not have a prophecy chart in front of him with an arrow pointing to May 14, 6 BC, for example, to mark the birth of Immanuel. Yet he believed Immanuel would be born. 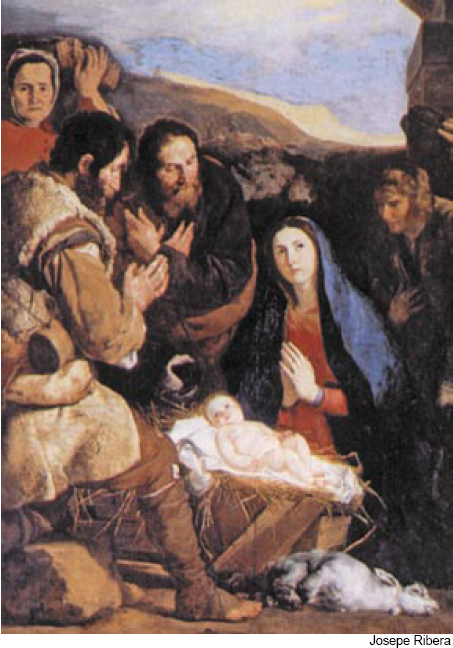 The Virgin and Child. Note the slaughtered lamb. It fortells the Crucifixion of Jesus, who became the lamb who died for the sins of the world.

Why is the virgin birth of Immanuel and His sinless nature important for us at this time of Christmas?

The Incarnation is at the heart of the Christmas message. The Apostle Paul wrote to Timothy, 'And without controversy great is the mystery of godliness: God was manifest in the flesh' (1 Tm 3:16). The only way the Second Person of the triune God could take on human flesh without being tainted by Adam's sin was to be conceived by the Holy Spirit and born of a virgin. He possesses two natures, perfect humanity and absolute Deity. As God manifest in human flesh, He could not sin, He would not sin, and did not sin.

As the perfect, spotless, sinless Lamb of God, He could die in our place and pay for all of our sins. As a result of that sacrifice, He could offer any and all who would trust Him the free gift of eternal life, the forgiveness of sins and a home in heaven. The Bible says that salvation is by faith alone in Christ alone.

Christmas is a time of gift-giving. We should not forget the greatest gift that God gave to the world and the gift that He gives to all that trust Him. The Lord Jesus said to Nicodemus, 'For God so loved the world that He gave His only begotten Son, that whoever believes in Him should not perish but have everlasting life' (Jn 3:16). Have you accepted the free gift of eternal life as found only in the Lord Jesus Christ?