The 1968 discovery of the remains of a crucified man in a cave at Giv'at ha-Mivtar in Israel created considerable interest among both Biblical and archaeological scholars...

This article was first published in the Fall 2002 issue of Bible and Spade.

A later reexamination of the right calcaneum (heel bone) revealed that the two heels had not been nailed together, but nailed separately to either side of the upright post of the cross, so that he straddled it (Zias and Sekeles 1985:22-24). Also later challenged was Haas's assertion that a nail had pierced the distal ends of the radius and ulna of the forearm. The scratches in the wrist area were determined to be non-traumatic and, therefore, not evidence of crucifixion (Zias and Sekeles 1985:24). Haas had also claimed that there was evidence that the legs of the victim had been broken (Haas 1970:57), but this was apparently based on what is described as 'inconclusive evidence' (Zias and Sekeles 1985:24-25). 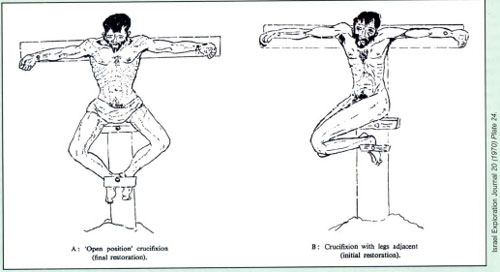 Two proposals for ancient crucifixion as demonstrated by N. Haas. The position on the right was the original anthropological speculation which was later changed to the position on the left. However, both positions may be incorrect as shown on the next drawing below.

Yadin has challenged Haas's assertion that the cross was made of olive wood (Yadin 1973:20) and Zias and Sekeles have denied that the right talus of the victim had been cut by sharp instrument to aid removal of the body from the cross (Zias and Sekeles 1985:24). In fact, they have suggested that bone morphology suggests that it belonged to a third individual buried in the ossuary! It was originally suggested that the bones of two individuals had been placed in the ossuary: one adult male, 24-28 years old and a child that was 3-4 years old (Haas 1970:42-43).

These re-appraisals do not diminish the archaeological importance of the find, however. The bones still give clear evidence of first century AD Roman crucifixion. These later reappraisals do remind us that archaeological research is a dynamic process by which earlier materials and conclusions are reevaluated as new material comes to light. 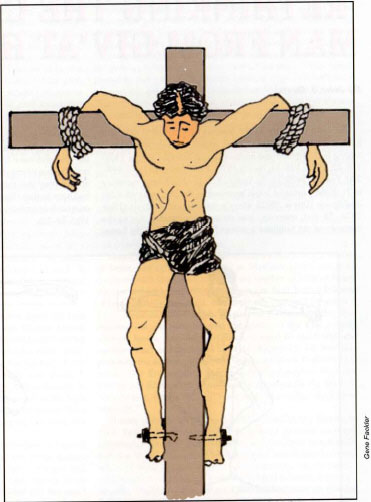 Reconstruction of the method of crucifixion of Yehohanan, a first century AD Temple worker whose remains were found in a cemetery in Giv'at ha-Mivtar in northeast Jerusalem. Gene Fackler. (Based on Biblical Archaeologist 54 [1991]: 155).