From One Evangelist to Another

And there were shepherds living out in the fields nearby, keeping watch over their flocks at night. An angel of the Lord appeared to them, and the glory of the Lord shone around them, and they were terrified. But the angel said to them, “Do not be afraid. I bring you good news that will cause great joy for all the people. Today in the town of David a Savior has been born to you; he is the Messiah, the Lord (Lk 2:8-11).

It must have been an awesome sight: the Judean darkness shattered by celestial glory and an angel of the Lord proclaiming the birth of the Messiah. The message was certainly momentous, and the heavenly declaration befitting a heavenly King. The recipients, however, were not necessarily those we would expect. Shepherds?!?

While shepherding as a profession historically included illustrious company like Abraham, Isaac, Jacob, Moses, David and Amos, by the time of Jesus it had fallen into disrepute. They were lower-class peasants who were considered untrustworthy and whose work rendered them ceremonially unclean.1 Later rabbinic sources indicate a common contempt for the occupation in the years after Jesus, warning the pious not to buy wool, milk or kids from shepherds, assuming they were stolen, and noting that shepherds were not allowed to testify as witnesses in a court of law.2 Yet it was to these shepherds keeping watch over their flocks by night and not to the rich and influential of the day that God sent the angel to announce the birth of the Christ.

Both the biblical text and ancient tradition place the shepherds near Bethlehem when the good news was proclaimed to them. In his book The Life and Times of Jesus the Messiah, Alfred Edersheim describes Migdal Eder, a watchtower along the ancient road leading north from Bethlehem to Jerusalem where shepherds pastured special flocks for sacrifices at the temple.3 Another possible location with ancient ties is the village of Beit Sahour, 2 km east of Bethlehem. Excavations by Corbo in 1951 revealed that people from the Herodian and Roman times inhabited the caves nearby, suggesting that a small farming community grazed their flocks in the nearby fields.4 Today visitors can tour the Church of the Shepherds’ Field that celebrates the angel’s announcement to the shepherds. Regardless of the exact location, the biblical description of shepherds near Bethlehem has historical connections and it was to shepherds like these to whom the privilege of being the first heralds of the birth of the new King was given.

Being the first to bring good news was considered an honored position in the ancient world. The first to bring a report of victory from a battle were often rewarded (2 Sm 18:22). In Imperial Rome, "good news" declarations were well known. When Paullus Fabius Maximus proposed that the Roman new year begin on Caesar Augustus’ birthday, the provincial assembly declared: "Whereas Caesar when he appeared exceeded the hopes of all who had anticipated good tidings...and whereas the birthday of the god marked for the world the beginning of good tidings through his coming..."5 In similar fashion, the angel announced good tidings of the coming of the one True God in human form.

In making this announcement, the first evangelist truly was the angel of the Lord; "I bring you good news," he declared. In the Greek language that the gospel of Luke was originally written in, this thought is expressed with the word euaggelizoœ, from which we get the phrase evangelize...to preach the gospel (good news). Indeed, Wycliffe translated this verse as, "I evangelize you a great joy."6 What was the good news of great joy the angel brought? "Today in the town of David a Savior has been born to you; he is the Messiah, the Lord" (Lk 2:11). To lowly shepherds the angel of the Lord brought the good news that they could be saved through the long-awaited Messiah, and this offer was open to all. This message included a sign with which to find the baby and was accompanied by an angelic choir singing God’s glory. 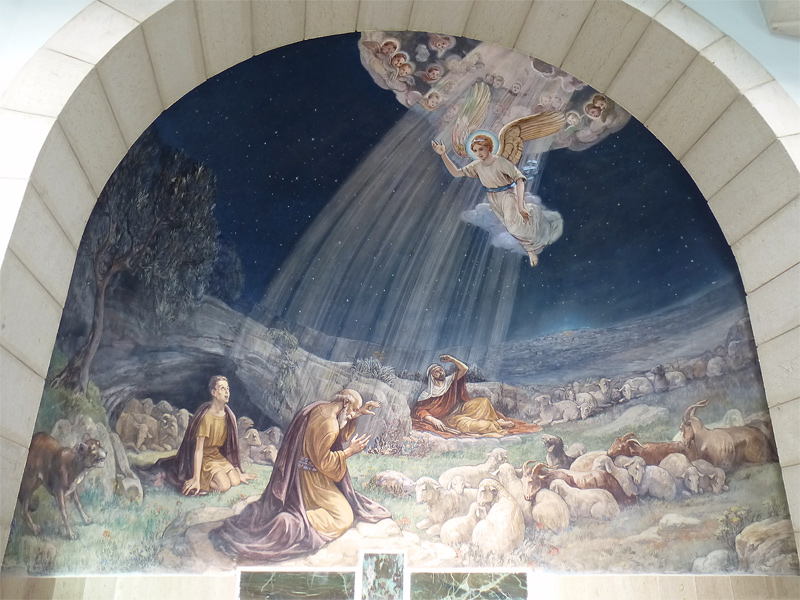 When the angels had left them and gone into heaven, the shepherds said to one another, "Let’s go to Bethlehem and see this thing that has happened, which the Lord has told us about."

So they hurried off and found Mary and Joseph, and the baby, who was lying in the manger. When they had seen him, they spread the word concerning what had been told them about this child, and all who heard it were amazed at what the shepherds said to them. But Mary treasured up all these things and pondered them in her heart. The shepherds returned, glorifying and praising God for all the things they had heard and seen, which were just as they had been told (Lk 2:15-20).

With their response, the shepherds in turn also become evangelists. After seeing the new Messiah King for themselves they immediately begin to "spread the word" about him. As the Angel of the Lord had evangelized them, they begin to evangelize the town of Bethlehem, telling others what they themselves had been told about the child. Can you imagine what that would have been like? Dirty shepherds rushing through the streets of Bethlehem proclaiming the good news. "Have you heard? The Messiah has been born. He’s the Lord and he’s come to save us all." The people are "amazed" at this news. Perhaps they’re amazed that the Messiah has come in their lifetime. Maybe they're amazed that the angel of the Lord would actually visit a group of shepherds. It could be that they’re amazed at the implications of the message, that God would send his Son to save the world.

Two thousand years later, people continue to spread the good news of Jesus’ birth and his reason for coming, echoing the words of those first evangelists. There is much we can learn from them, but three lessons stand out:

1. Availability – The shepherds were not professional orators, nor practiced heralds. They could have kept the good news to themselves, but humble as they were, they were available and allowed themselves to be used by God to spread his message of peace on earth good will to man. Some today may not feel they’re gifted to be evangelists. In an age of professional televangelists and mega-church pastors, it’s helpful to remind ourselves that God often uses the weak, lowly and despised to accomplish His purposes (1 Co 1:27-28).

2. Urgency – Don’t miss the fact that the shepherds hurried to Bethlehem and then immediately began to spread the word. This was good news of great joy for all people. The shepherds’ haste and instant evangelism challenge us to understand the urgency of the gospel...this is good news that must be shared!

3. Sincerity – Finally, notice the personal response of the shepherds. They returned to their sheep-filled fields glorifying and praising God, no doubt filled with joy. To them, the news was more than just an announcement of an amazing birth. They got it...personally. When the angels evangelized them, they responded with glad and sincere hearts and praised God as they exited the city of Bethlehem that night. Does the gospel continue to cause our hearts to swell in praise to God for all that He has done for us? The angel evangelized the shepherds, who evangelized the town of Bethlehem. In the 2000 years since, people who have responded to the good news have, in turn, shared it with others as the gospel has spread throughout the world. From one evangelist to another, may we, like the first evangelists, spread the joyous message that Christ has come to save the world.