Patriarchal Wealth and Early Domestication of the Camel

The Genesis account of Abraham, Isaac and Jacob suggests all three were wealthy men. While scholars generally view references to camels in relation to these patriarchs as anachronistic, author Stephen Casear points out that is not the case. He adds that the mention of camels actually helps explain the source of the patriarchs' wealth. - Ed.

The almost unanimous opinion of Biblical scholars is that mention of domesticated camels in the Patriarchal narratives (Gn 12:16; 24:10; 30:43) constitutes an anachronism. Camels, they say, were not domesticated until late in the second millennium BC, centuries after the Patriarchs were supposed to have lived. Even the great William F. Albright, well known for his support of the historicity of the Patriarchal narratives, concluded that references to camel domestication in the book of Genesis were incorrect (1964: 153, n. 2).

Recent discoveries, however, have shown that this dismissal is unwarranted. Excavations in eastern Arabia, an area once believed to be a cultural backwater unworthy of archaeological investigation, have turned up evidence that camels were first domesticated by Semites before the time of Abraham. Much of this evidence has been examined by M. C. A. MacDonald of the Oriental Faculty at the University of Oxford and an epigraphist specializing in ancient North Arabian and Aramaic inscriptions. He wrote:

Recent research has suggested that domestication of the camel took place in southeastern Arabia some time in the third millennium [BC]. Originally, it was probably bred for its milk, hair, leather, and meat, but it cannot have been long before its usefulness as a beast of burden became apparent (1995: 1357). 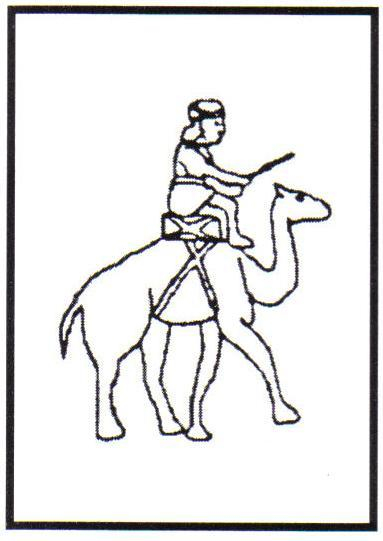 A Ninth century BC relief from Tell Halaf, Syria, showing a man riding a camel. Development of the behind-the-hump saddle (see Gn 31:34) bolstered use of the camel for travel as well as for transport. - Larry Schweiger

With this third millennium date for camel domestication in mind, let us look at the approximate date of the Patriarchal era. According to Exodus 12:40, the Israelites dwelt in Egypt for 430 years; according to 1 Kings 6:1, the Temple of Solomon was built 480 years after the flight from Egypt. Since most archaeologists date the construction of the Temple to the tenth century BC, simple arithmetic brings us back to the period of the 19th or 18th centuries BC, well after the first domestication of the camel. When we juxtapose the Biblical date for the Patriarchs with MacDonald's date for the earliest camel domestication, the claim of anachronism evaporates.

There is an additional point raised by these recent findings. A map accompanying MacDonald's article pointed out that the principle area of extensive early camel domestication was the Syro-Arabian desert, due west of Ur, Abraham's birthplace (1995: 1356). Additionally, MacDonald noted that Semitic pre-Patriarchal domestication of camels near Ur eventually made possible direct traffic between major centers of civilization and trade across regions previously regarded as impassable. The inhabitants of the Syro-Arabian desert thus held the key to the crossing of these regions, giving them a commercial and strategic value to surrounding rulers that was out of proportion to their economic and military strength (MacDonald 1995: 1357).

One-humped dromedary camel. While both one-humped dromedary camels and two-humped bactrian camels are known in the ancient Near East, the dromedary was the most prominent. W. F. Albright concluded that the camel could not have been domesticated before the end of the 12th century BC, yet the Bible dates the domesticated camel to the days of Abraham (ca. 2000 BC). Scholars are undecided whether camels were first bred for their milk, hair, leather and meat, or for use as a beast of burden. The author suggests use of the domesticated camel for travel and transport as a major factor in the wealth the Bible attributed to the patriarchs Abraham, Isaac and Jacob.

According to MacDonald, the newly domesticated camel was used to traverse rough inhospitable terrain such as that between Mesopotamia, where Abraham was born, and Canaan, where he and his offspring eventually settled. This, of course, is in keeping with the frequent mention of camels in the Biblical story of three individuals who expended considerable effort traveling between Mesopotamia and the Levant (e.g., Gn 12:4-5; 24:10ff; 28:2-5).

Additionally, MacDonald noted that possession of camels by Semitic travelers endowed them with a special advantage over those who did not, particularly in economic and political terms. This conforms to the Genesis image of the Patriarchs as wealthy, respected individuals who could hold their own against monarchs and chieftains. Bible scholars have long known that the popular image of the Patriarchs as penniless, simple pilgrims is without Scriptural justification; Genesis makes it clear that Abraham, Isaac, and Jacob were wealthy in cash, livestock, and agriculture. Abraham was powerful enough to engage in battle against the kings of the east, using a large body of hired men as his army (Gn 14:14-16), and he had no difficulty buying a plot of land for 400 pieces of silver (23:8-6). In fact, the men from whom he purchased the land referred to him unequivocally as a mighty prince among us (23:6). Isaac was noticeably wealthy in produce, livestock and servants, much to the consternation of the locals (26:12-4). Moreover, he had little trouble standing up to the King of Gerar (26:1-11). Jacob, too, was conspicuously wealthy (30:43), and Esau considered him his equal, despite the fact that the latter was recognized as the region's local chieftain (33:1-15). The Book of Genesis, thus, unambiguously portrays the three Patriarchs as wealthy, influential persons. 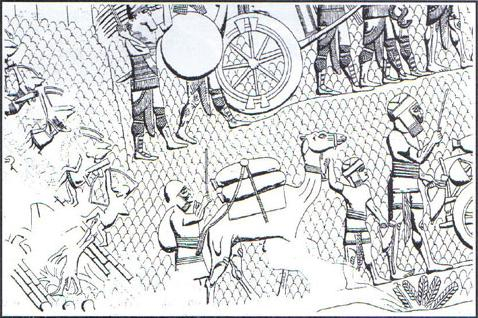 Judean captives being led from Lachish after Sennacherib's capture of the city had a loaded dromedary camel with them. Camel bones were also excavated in Iron Age levels of Lachish. The Midianite and Amalekite armies (Jgs 6:5) as well as King David (1 Chr 27:30), had large herds of camels. Prohibited from eating camel in the Mosaic law, (Lv 11:4; Dt 14:7), they are known in the Bible for travel (Is 21:7) or transport (2 Kgs 8:9).
- Gary Byers

As MacDonald mentioned, Semites who traversed the harsh land between Mesopotamia and Canaan owed their extraordinary wealth and power to their use of domesticated camels. The rich, influential Patriarchs may have been this very type of Semitic merchant whose camels traveled between the Levant and the Land of the Two Rivers. Decades ago, scholars of the ancient Near East made this connection-despite the fact that they rejected the historicity of domesticated camels in the Patriarchal narratives. For example, Cyrus Gordon, former Chairman of the Department of Mediterranean Studies at Brandeis University, connected Abraham with the tamkaru (singular tamkarum), a class of merchants in Mesopotamia:

One can say with confidence that Abraham is represented as a tamkarum from Ur of the Chaldees... Like many others from Ur, he embarked on a career in Canaan. But unlike the others, he succeeded in purchasing land and laying the foundation for his descendants' settlement there (1962: 35).

He went into detail:

Abraham is repeatedly described as wealthy in gold and silver as well as in livestock and slaves. In Genesis 23:16, his commercial interests are hinted at by the phrase 'current for the merchant' describing the four hundred shekels of silver that he paid out. The commercial pursuits of the Patriarchs are explicitly mentioned in two different contexts confirming their commercial activities: once when the Shechemites invite Jacob's family to join the Shechem community (Gn 34:10); the other when Joseph provisionally welcomes his brothers to settle in Egypt (Gn 43:34). On both occasions, trading privileges are offered. Abraham could afford to turn down a personal share in the plunder [after battling the kings of the east, Gn 14:21-24] because he had a peaceful and adequate source of income; viz., legitimate trade: an occupation that his descendants continued for at least three generations according to the text of Genesis (Gordon 1962:286-287).

Abraham and Sarah are plainly described as the founders of a royal line (Gn 17:6, 16), and the circle in which they move is aristocratic. Socially, they deal with Pharaoh and the Philistine King of Gerar. Moreover, in role Abraham is a king, functioning as commander in chief of a coalition against another coalition of kings (Gn 14).

Dr. Albright (1983: 15) concurred with this image of the Patriarchs. Expanding on Dr. Gordon's last point, he observed:

...neither this chapter [Gn 14] nor Genesis 23 [in which Abraham buys land for a large sum] is intelligible unless we recognize that Abraham was a wealthy caravaneer and merchant whose relations with the native princes and communities were fixed by contracts and treaties (covenants). 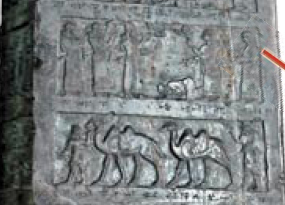 The Black Obelisk of Shalmaneser III is a 1.98 m (6.5 ft) tall four-sided black limestone pillar covered with pictures and writing on all sides. In the upper panel, King Jehu of Israel is pictured, the only ancient depiction of any Israelite king. In the lower panel, two bactrian (two-humped) camels are pictured. An additional pair of bactrians also appears in the top panel of the full view photo of another side of the obelisk.

He further pointed out that the words 'merchant' in Genesis 23:16 and 'trade' in 34:10 come from the Hebrew root word SHR, which is related to Old Assyrian terms meaning to trade, barter and goods for barter (Albright 1983: 12-13). With these facts in mind, it is not difficult to see the connection between the Patriarchs and camel ownership. As MacDonald pointed out, owners of camels were wealthy caravaneers who were able to deal on an equal basis with local rulers, precisely how the Book of Genesis portrays Abraham, Isaac, and Jacob.

To encapsulate, Prof. MacDonald's findings have an enormously important bearing on the Patriarchal narratives. First the pre-Abrahamic date for domesticated camels nullifies the claim that their mention in Genesis is anachronistic. Second, ownership of camels would have greatly facilitated the Patriarchs' frequent travels between Mesopotamia and Canaan. Third, domesticated camels in that era gave their owners an extraordinary economic advantage vis-à-vis the ruling classes of their day; this, as Drs. Gordon and Albright pointed out some time ago, is in perfect keeping with the general image of Abraham, Isaac, and Jacob as wealthy merchants who dealt on equal footing with the various local petty-kings they encountered. Thus, the early domestication of the camel not only eliminates a major objection to the historicity of the Patriarchal stories, but also clarifies the somewhat uncommon-but nonetheless accurate-picture of the Patriarchs as wealthy, influential caravaneers who were truly 'mighty prince[s] among us.'

Caesar, Stephen A. The Wealth and Power of the Biblical Patriarchs, Bible and Spade, Winter 2006.