The Beni Hasan Asiatics and the Biblical Patriarchs

The Beni Hasan cemetery of thirty-nine monumental tombs represents the final resting place for a couple of centuries of Middle Kingdom Egyptian provincial officials. Tomb Three is the final resting place of Khnum-Hotep III (III is a modern designation, with two other Khnum-Hoteps known at the site). His position was nomarch, or governor, of the Antelope Province (Twelfth Dynasty, late twentieth-early nineteenth century BC). The horizontally-cut monumental tomb included an open outer court, two-column portico and doorway, main chamber with two rows of inner columns and a smaller shrine room-all cut into and from the solid rock. 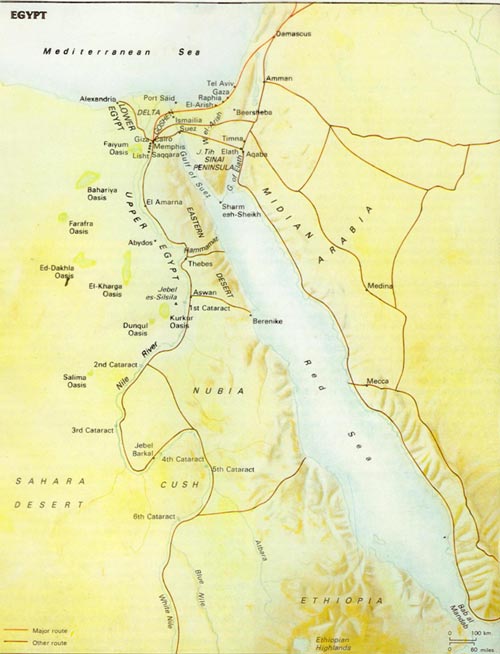 Map of Ancient Egypt. The village of Beni Hasan is located 160 miles south of Cairo. Not mentioned on the map, it is located just north of Amarna.

The interior walls of the main room (32x31ft and 19ft high) were covered with inscriptions and colored paintings depicting the life and administration of Khnum-Hotep, including special events while he was in office. The paintings were first published in 1845, by the French scholar Francois Champollion.

One scene shows people before the ruler weighing silver, payment for taxes. Others depict measuring grain, working the fields and vineyards, life by the river, hunting scenes and sporting events with the ruler and his wife in attendance. Rows of scenes depict wrestling matches in sequence, from beginning to end. 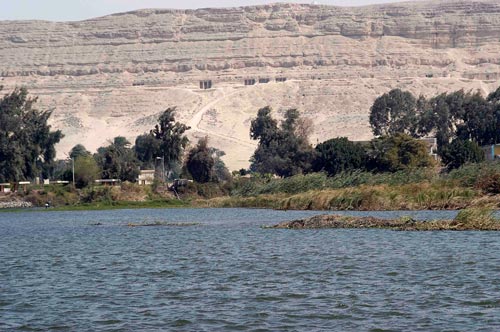 Monumental tombs of Beni Hasan (ancient Monet-Khufu) cut high up in the cliffs of the Nile's east bank.

The Asiatic Scene at Beni Hasan

Of special interest to Biblical scholars is the north wall mural, dated to the sixth year of Twelfth Dynasty Pharaoh Sesostris II (ca. 1892 BC). Here, to the left, Khnum-Hotep is pictured as a hunter, twice the size of everyone else. On the right side, he is triple-size with a long staff apparently in his left hand. Approaching the governor, in the third register from the top, is an unusual scene-a caravan of people from Syro-Palestine visiting the governor. Called Aamu in the hieroglyphic inscriptions, but commonly referred to as Asiatics by Egyptologists today, they were known to regularly cross the Sinai from Canaan into Egypt-but seldom visited this far south. This visit's inclusion in his tomb decoration suggests that Khnum-Hotep considered this to be a significant event during his reign.

The scene depicts fifteen people (eight men, four women and three children) of a different skin color than almost all the other people on the mural. Their yellow skin was a standard Egyptian artistic convention to differentiate Mediterranean-world foreigners from Egyptian men (red skin color). Interestingly, Egyptian women are also depicted with yellow skin (maybe suggesting they stayed indoors and out of the sun). Nubians, or Cushites, from southern Africa are depicted with darker skin (along with other physical characteristics).

The accompanying inscription (above the second man with the gazelle) says the group numbered thirty-seven. It also says they brought stibium1 (a black cosmetic prized by the Egyptians and used for eye paint). The full inscription reads (from right to left), 'The arrival, bringing eye paint, which thirty-seven Asiatics (Aamu) brought to him,' is actually a summary statement of what is written on the scroll being presented to the governor.

The group seems to be an extended family of traders. While the inscriptions mention eye paint, their equipment suggests a band of traveling metal workers. That might be appropriate, since the most common material for eye paint in early Egypt was malachite (a green ore of copper), well-known in the Syro-Palestine region.

In front of the leading Asiatic and below the antelope's neck is the leader's name in hieroglyphs (Ibsha). He is labeled as 'Ruler of a Foreign Land' (heq setu) above the antelope's head. This title is the root of the word 'Hyksos'-the hieroglyphic name for a group of Asiatics who invaded and ruled Lower (northern) Egypt several centuries later. There is no reason to connect this group with the later Hyksos, except that they were also Asiatics.

The two Egyptians introducing the Asiatics are identified by the inscriptions before them. Nefer-Hotep is the Scribe of the Royal Documents (in the lead with the document), and Khety is Overseer of Hunters.

The document in Nefer-hotep's hand restated the purpose of the Asiatics' coming, adding the date of their visit and their place of origin. 'Year six under…Sesostris [II]. List of the Asiatics whom the son of Governor Khnum-Hotep brought on account of eye paint. Asiatics of Shut. List thereof: thirty-seven.' No doubt a papyrus scroll, it suggests the group's appearance was officially documented (and significant enough to be depicted in the governor's tomb). Stating that the governor's son arranged for their coming may represent his special effort in going to the Delta and prevailing on the Asiatics to bring their wares to his province. Their land of origin, Shut, is unknown in Syro-Palestine, but may have been located in modern Jordan. 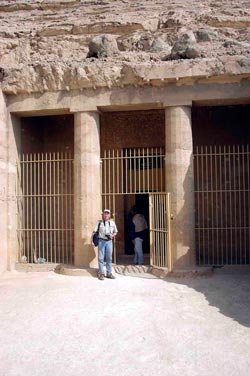 Dr. Bryant Wood standing in the open court before the monumental entrance of the Tomb of Khnum-Hotep III at Beni Hasan.Dressed for Success

Most immediately distinctive is the difference in clothing. While the two Egyptians wear the traditional white linen kilt, the Asiatics wear mostly multi-colored garments. Five of the men wore robes to their knees, three of them with colored cloth. All four women wore colored robes to their ankles. Most robes (men and women) appeared to cover only one shoulder. Three of the men and the walking child wore colored kilts. With white representing the basic color of linen or wool garments, the multicolored red, white and blue would represent a considerable financial investment. In addition, the colored kilts of the last two Asiatics and the leader's robe all seem to have fringe on the hem.

While the Egyptians generally appear barefoot, the Asiatics men are wearing sandals, except the first two (out of deference?) presenting their gifts to the governor. The women appear to be wearing a sort of moccasin (animal skin) boot, while the walking child is barefoot.

Animals depicted include two domesticated donkeys (one male and one female!), and two wild animals presented as gifts to the governor-a (male?) antelope (for the governor of the Antelope nome) and a (female?) gazelle. The male donkey may be carrying bundles of colored cloth (carpets?) upon which sit the two children. Known tomb paintings do not depict such a practice among Egyptians during this period. The other beast of burden is carrying colored cloth and other equipment. While a spear is obvious, there appears to be a portable hand bellows (maybe two) and other items. The unclear item(s) accompanying the bellows might be copper ingots packed together or possibly metal working tools.

While the women (safely walking in the middle of the group) carry nothing with them (the walking child has a spear), all the men carry something in their hands and/or on their shoulders. The men appear, typically, to be right-handed. The items the men are carrying include: (rear guard) a quiver, bow and possibly axe with the last man; water skin, lyre and plectrum (the earliest depiction of a Canaanite musical instrument) with the second to last man. The group of four in front of the women include: the last man in the lead group, looking back (to check on the women and children?) carries a spear; the next man carries a throw stick (the Egyptian symbol for Asiatics) and also a spear; man in white (second to the front) carries a bellows (or water sack) on his shoulder and a throw stick; the lead man carries a bow (in his left hand). The two barefoot leaders of the group, bringing the gifts to the governor, carry no weapons.

A color rendering of the famous Asiatics visiting Egypt (from row 3).

The Khnum-Hotep tomb paintings, in general, provide an important glimpse into daily life and activities in this Egyptian province early in the second millennium BC. Yet this one scene offers a unique glimpse of Asiatics in Egypt at this time. Whether merchants or traveling artisans, the scene and inscription suggest an extended family, of thirty-seven, traveling from Syro-Palestine into Egypt.

Because Khnum-Hotep's administration occurred at the turn of the nineteenth century BC, the depiction of Asiatics in Egypt at this time can't help but conjure up a picture of the Patriarchs (Abraham, Isaac, Jacob and Joseph) each of whom also spent time in Egypt during this general time period. A group of men, women and children suggests an extended family unit working and traveling together, reminiscent of Jacob's family traveling to Egypt. So the Beni Hasan Asiatics' appearance, dress, equipment and mode of travel should reflect much about the Patriarchs.

Both the Biblical Patriarchs and the Beni Hasan Asiatics traveled from the same region (Syro-Palestine) to the same region (Egypt) during the same period (twentieth-nineteenth centuries BC). While no one proposes these are the Israelites, it is the right people, the right places and the right time to offer greater insights into the world of Biblical characters.

1. The Egyptian name for eye paint was sdemet (the root of the term used in this inscription). That term was borrowed by the Greeks as stimmi and later stibium to the Romans. The modern term for eye paint-kohl-comes from the Babylonian gukhlu, related to the Arabic kuhl.