Benedict's Anchor: Was It From the Shipwreck of the Apostle Paul on Malta?

On Saturday, April 17, 2010, Pope Benedict XVI visited the island of Malta in the middle of the Mediterranean Sea. On his stop at the Church of St. Paul's Grotto in the city of Rabat, he was shown an inscribed lead Roman anchor stock that had been discovered five years earlier off the coast of Malta.

My good friend Mark Gatt, a Maltese diver, reports to me that this anchor stock has been nicknamed 'Benedict's anchor' because it was discovered on April 24, 2005, on the same day that Pope Benedict XVI celebrated his inaugural papal mass after being elevated to the papacy. Was this a coincidence? When this discovery and the date of its find were reported to the pope, he said it was, 'Divine providence.'

The anchor stock is now on permanent display at the Malta Maritime Museum in Vittoriosa. Is this anchor stock from one of the four anchors that was jettisoned from the stern of the Alexandrian grain ship carrying the Apostle Paul and Dr. Luke to Rome in AD 60 (Acts 27:29)? Let us examine this possibility. 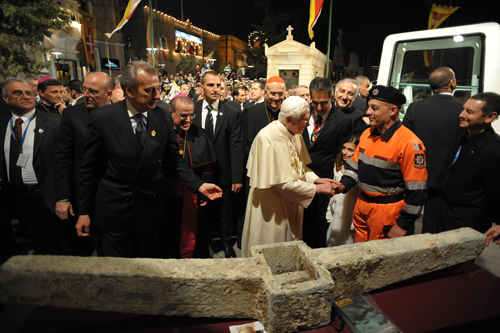 On April 17, 2010 Pope Benedict XVI inspects the anchor outside St. Paul's grotto in Rabat, Malta. The Pope asked scuba diver Mark Gatt, 'is this anchor coming from an Egyptian grain ship?' On this same occasion, Mark presented the Pope with his book, PAVLVS The Shipwreck 60 A.D. (Allied Publications - 2009).

Description and Importance of 'Benedict's Anchor'

Mark Gatt gives a very descriptive account of the dive in which he discovered his now-famous anchor in his gripping and well written book PAVLVS The Shipwreck 60 A.D. (2010: 46-63). This anchor was retrieved off the coast of the Ghallis Tower near Salina Bay

What Gatt discovered was actually a lead anchor stock. This was the heaviest portion of the anchor that brought the anchor to the sea floor and allowed one of the wooden flukes, possibly tipped by a copper 'tooth', to bury itself into the sea bottom or snag a rock. This stock made of lead measured 2.3 meters long (about 7 ½ feet; 2010: 59, 69, 111) and weighed about 700 kilograms (1,540 pounds; 2010: 59). It was found at a depth of 36 meters (118 feet; 2010: 55, 94). There are a number of lead anchor stocks that have been found off the coast of Malta, but this is the first reported one that had an inscription on it.

Inscriptions and symbols on anchors had several functions. The symbols may have been for 'good luck (dolphins, caduceus), or related to the sea (shells) or apotropaic (Medusa head).' Also, on some anchors there were found 'numbers, names of divinities (= names of ships), e.g. Isis, Hera, Hercules, and rarely, names of men … [that] may provide evidence for senatorial involvement in trade' (Gianfrotta 1980: 103, English abstract).

'Benedict's anchor' had two inscriptions on the anchor stock. On the left side of the stock was inscribed in Latin, the word ISIS, the name of an Egyptian goddess. On the right side was the word SARAPIS, the name of an Egyptian god (Gatt 2010: 64-68). When it was first recovered from the ocean floor the right hand inscription read SARAPI, it was only after cleaning in the museum labs that the final 'S' was revealed.

It is always an archaeologist's dream to find an inscription because this is how the ancients communicate with us in the present. This simple, two word inscription, tells us much about the ship it had been on. First, it tells us that the owner of the ship, who most likely commissioned the casting of the anchor, was a superstitious devotee of the divine couple, Isis and Sarapis. Second, it suggests that the anchor stock was originally cast in Egypt, most likely the port city of Alexandria. 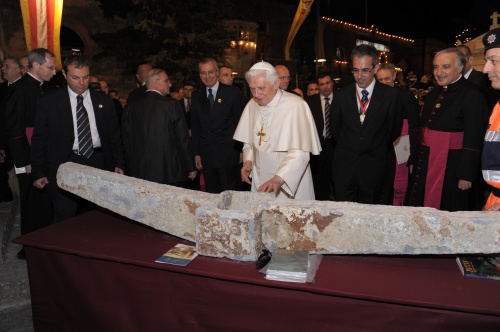 Pope Benedict XVI with the anchor discovered on the same morning of his inauguration to the Pontificate, described in his own words as, 'a sign of Divine Providence.'

Dr. Luke gives a very detailed account of the voyage and shipwreck of the Alexandrian grain ship that he and the Apostle Paul were on when it foundered off the northern coast of Malta (Acts 27:6-28:11).

At about midnight, when it was pitched black, on the fourteenth day of their ordeal in a nor'easter storm, the sailors sensed they were near land. A crew member cast out a sounding weight to determine the depth of the sea. It measured 20 fathoms (120 feet; about 36 meters). When the sounding weight was cast out again, it measured 15 fathoms (90 feet; about 27 meters). Fearing they would run aground on rocks, they dropped four anchors off the stern of the ship (27:27-29).

Would all four anchors be found at a depth of 15 fathoms? If the crew was standing by with four teams, each holding an anchor, and if all four anchors could have been dropped immediately and simultaneously, they would be found at about 15 fathoms. Dr. Luke, however, does not indicate that the anchors were immediately dropped. He uses three different words translated for 'immediately' in his gospel and in the book of Acts, each indicating when something was done immediately. But he does not use any of those words here in reference to dropping the anchors. The implication is that it took a bit of time to deploy the anchors after the ship reached the 15-fathom depth and therefore it may be unlikely that the anchors were dropped at that depth.

Mark Gatt calculated that the ship was moving at approximately 2.5 knots (about 3 miles/hour; 5 km/hour) as it was blown by the wind. If, for example, it took the crew five minutes to throw the anchors overboard, the ship would have moved 1,300 feet or ¼ mile (400 meters) from when the crew member called out 15 fathoms. If the crew took ten minutes, then the ship would have moved 2,526 feet or about ½ mile (800 meters); fifteen minutes, 3,790 feet or about ¾ mile (1.2 kilometers). If the ship was heading toward shore, the longer it took to deploy the anchors, the shallower the depth the anchor stocks would be found. If they were running parallel to the shore, as in the case of Saline Bay, the depth might remain the same. Some have calculated the ship was moving a bit faster, thus the distances would be even larger!>

Location of the Find

'Benedict's anchor' was not an isolated anchor discovery off of Qawra Point outside of Salina Bay. In fact, a concentration of at least five other anchor stocks and one collar has been retrieved from this area.

The largest lead anchor ever found in the Mediterranean Sea, known as a 'sacred anchor,' was first reported some 300 yards off of Qawra Point in 120 or 130 feet of water in 1962. The next year it was raised by the British Royal Air Force Sub-Aqua Club and the Royal Navy Boom Defense. This anchor stock measured 13 feet, 6 inches and weighted 3 ½ tons. Twenty five feet away was found an 80 pound lead collar that was 84 centimeters long (MAR 1962: 7; MAR 1963: 7; Scicluna 1985: 3). Both objects are on permanent display in the Malta Maritime Museum in Vittoriosa.

Also in 1963, another lead anchor stock was recovered from a depth of 50 to 60 feet of water about 400 yards off Qawra Point. This medium sized anchor stock weighed about 500 pounds (MAR 1963: 7). This anchor stock was found by Tony Micallef-Borg at an approximate depth of 100 feet. He could not shift it, so he asked the Royal Navy to help lift the stock to the surface (Musgrave 1979:29, 117).

Commodore Scicluna records three other anchors that were brought up from off the entrance to Salina Bay: one 117 pounds, another 489 pounds and the last, 200 pounds, but their precise location off Qawra Point and depth of discovery are unknown (1985: 10; Guillaumier 1995: 97; MAR 1967: 7-8). There may be other anchor stocks that have not been discovered, or some that were secretly recovered and have gone unreported because they are in private collections.

Professor A. J. Parker, a leading maritime archaeologist, suggests a date in the 3rd century AD, based on the pottery found in the area, for the fragmentary remains of this ship that sank just south of Qawra Point (1992: 363). 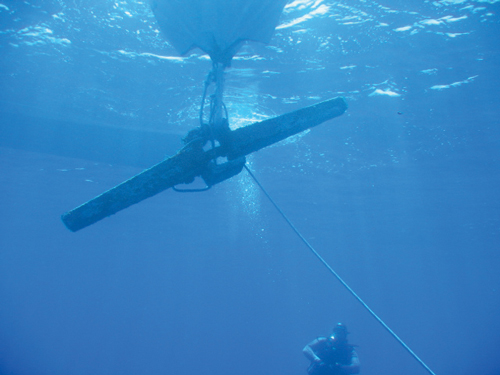 After 2000 years the ISIS ~ SARAPIS anchor is retrieved from the seabed Off Qawra Point, Malta.

Mark Gatt follows the theory, first set forth by Commodore Salvino Scicluna (1985:1-5), and also held by George Musgrave (1979), Paul Guillaumier (1992), and Howard Vos (1999: 579-583), that the Apostle Paul's ship ran aground and broke up off the coast of Qawra Point and outside Salina Bay on the northern shores of Malta. This is a valid theory that should be carefully examined and considered.

Gatt does, however, express caution about his discovery and the theory when he states: 'Archaeologically, we have no definitive proof that the anchors and artifacts discovered outside of Salina Bay belong to Paul's ship. What we have so far is the lack of such evidence for St Paul's Bay. But, if we had to gather and analyze all the facts as a whole - the artifacts, the rich tradition, Maltese history, Chapter 27 of the Acts of the Apostles - then we have a very strong case for arguing that St Paul was shipwrecked on the northern Maltese shores' (2010: 205).

In other words, 'Benedict's anchor' being on the ship that Paul and Luke were on is a possibility, but not a certainty. Unfortunately the six anchors found off Qawra Point were not found during a systematic underwater survey and properly recorded by nautical archaeologists. Questions still remain and some questions will never be answered: Are there more anchor stocks and collars to be discovered off Qawra Point? Have other anchors stocks been discovered but are unreported because they are in private collections? Were all six anchors deployed from the same ship? Were these anchors from an Alexandrian grain ship? Was the pottery found on the sea floor associated with the anchors? If so, what was the connection? What was the precise depth and location of each anchor that was found? What was the directional position of each anchor stock? From this, one could determine the direction the ship was heading when the anchors were deployed. Did the sea floor change depths due to seismic activity?

The Alexandrian grain ship that the Apostle Paul was on could also have foundered elsewhere on the northern coast of Malta and the wreck still remains to be discovered. Only time will tell.

The Egyptian gods embossed on the lead anchor stock. (Click on photo to enlarge)

All photos courtesy of Mark Gatt.

1992 New Perspective on the Historicity of St. Paul's Shipwreck on Melite. Pp. 53-114 in St. Paul in Malta. A Compendium of Pauline Studies. Edited by M. Galea and J. Ciarlo. Zabbar, Malta: Veritas.

1959-1969 Report on the Workings of the Museum Department. Malta: Department of Information.

2008 Testing the Waters: The Role of Sounding Weights in Ancient Mediterranean Navigation. Pp. 119-176 in The Maritime World of Ancient Rome. Edited by Robert Hohlfelder. Ann Arbor, MI: University of Michigan for the American Academy in Rome.