Home » Research » Contemporary Issues » The Benefit of the Doubt

The Benefit of the Doubt

Recently, archaeological remains were discovered in Jerusalem that affirmed the presence of Hasmoneans in Jerusalem during the second century BC. This was in accord with historical texts, such as the book of 1 Maccabees. In this brief article, Dr. Scott Stripling illustrates how the principle of the 'benefit of the doubt' is often applied to some written texts, but with a double standard when it comes to King David and the Bible.

Although I come from a Protestant faith tradition, I have always been interested in the Apocrypha, especially 1 Maccabees. However, I read the Bible for years before I realized that the Festival of Dedication in which Jesus participated (John 10:22-39) was what we today call Hanukkah. As my interest in archaeology and the Bible grew into obsession, I looked hard for evidence of the enigmatic period of the Hasmoneans, hoping that it would help me bridge the gap between Malachi and Matthew. I soon learned that the trowel had revealed very little to confirm the existence of this pre-Herodian dynasty of Jewish rulers, especially in the capitol city of Jerusalem.

It was only within the last five years that the site of Umm el-Umdan, apparently Modiin of the Second Temple period, was excavated. In May 2010, the Associates for Biblical Research began systematic excavation of the Late Hellenistic and Early Roman village that was founded during the Hasmonean era at Khirbet el-Maqatir. Hundreds of Hasmonean coins bear this out. This fortified village sits on top of about 25% of the LBI fortress (Ai of Joshua 7-8).

But, who cares? After all, we have the historical sources like Josephus and Maccabees that tell us that they existed, and there could be any number of reasons why there is scant archaeological evidence from this era. For starters, Herod rebuilt and enlarged most of the things that the Hasmoneans had constructed, thus making differentiations very difficult at times.

On 12/4/13 ICEJ News announced that archaeologists were finally able to confirm a Hasmonean presence in Jerusalem.

Just in time for Hanukah, archeologists excavating Jerusalem's City of David announced this week that they have uncovered remains, including a small building containing dozens of ancient silver and bronze coins, from the period of the Hasmoneans, the dynasty of Jewish kings which came to power in the wake of the Second Century BC revolt Hanukah commemorates. 'We are filling a gap in the sequence of periods in Jerusalem's history,' said Dr. Doron Ben-Ami, one of the excavation's directors. 'We know it is well documented in different texts that it flourished in the 2nd century BCE, but there has been almost nothing found there until now.'

This confirmation caught no one by surprise. Why would we doubt the Apocrypha or Josephus? If only the archaeologists excavating in Jerusalem were more consistent in their evaluation of the evidence. 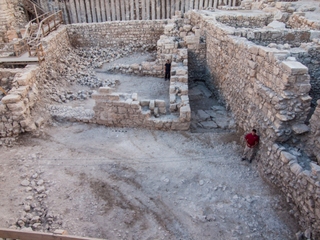 For many decades there has been a raging debate about the existence of an earlier dynasty of kings referred to in the Bible and Josephus as the Davidic Dynasty. The secularists, often referred to as 'Minimalists' in archaeology circles, argued that there was little or no evidence in Jerusalem or elsewhere to prove that David was more than an aeteliological legend. It seems that David and Solomon don't get the same benefit of the doubt that Mattathias and Judas get.

And then everything changed. In 2005, Eilat Mazar, an archaeologist from Hebrew University, followed the clues in the Bible (2 Samuel 5:7-9, 2 Samuel 6:16, 2 Samuel 11, 2 Samuel 16:22, and Nehemiah 12:37) and began excavation just above the famous millo or stepped stone structure in the City of David. In Season One, she was relatively certain that she was uncovering a monumental building from the time of David (c. 1000 B.C.) since the architecture (proto Aeolic capital, etc.) and pottery were unique to that era. Subsequent seasons brought substantial additional confirmations that she had found David's palace. This discovery, along with the House of David inscription found at Tel Dan in 1993, established to any fair-minded person that the biblical and extra-biblical accounts of David were accurate.

One of the more interesting synchronisms between the archaeological data and the biblical text is the Assyrian siege of Judea, and ultimately Jerusalem, in the days of Hezekiah, 8th century B.C. or Iron Age II. Sennacherib's palace at Nineveh was decorated with reliefs depicting scenes of the destruction of Lachish, the gateway city to Jerusalem (new excavations begin at Lachish in the summer of 2014). These reliefs can be seen today in the British Museum. According to 2 Chronicles 32, Jerusalem was spared by divine intervention. A cuneiform prism inscription confirms that Sennacherib did not conquer Jerusalem. The royal propaganda reads, 'I left Hezekiah like a bird in a cage.' What if the Assyrian monarch had claimed that he had destroyed Jerusalem? Would the Bible and the inscription be taken with equal weight? Sadly, the majority of scholars would give primacy to the extra-biblical text.

Perhaps the answer lies in the very first verse of the New Testament: This is the genealogy of Jesus the Messiah the son of David, the son of Abraham.