People often ask me what has been my most interesting and rewarding archaeological experience. Apart from watching Raiders of the Lost Ark five times, I would have to say it was serving as a Field Supervisor of the excavations at Carthage in Tunisia. The effort to unearth the city of Carthage has been a tremendous international endeavor, including archaeological teams from Germany, Japan, Italy, Canada, the United States, and elsewhere. The city has undergone intensive, full-scale excavations from the 1970’s until today.

Carthage is a port site located in northern Tunisia on the coast of the Mediterranean Sea. It was founded by the Phoenicians in the eighth century BC, roughly the time that Ahab and Jezebel were on the thrones of Israel. The Phoenicians resided on the northern coast of Israel and were well-known for their seafaring exploits. They colonized much of the Mediterranean world in antiquity, moving from Phoenicia to Cyprus, North Africa, Italy, Corsica, and Spain (some have even suggested that they discovered the New World).

The most important colony founded by the Phoenicians was Carthage. Many people know of the city because of famous events associated with it, such as the great wars with Rome, Hannibal and his elephants, or Virgil’s Aeneid.

The most significant part of the American excavations occurred in the Tophet. The word Tophet comes from the Old Testament (e.g., 2 Kgs 23:10; Jer 7:30–32), referring to a place of a child sacrifice and burial. Modern excavators applied the term Tophet to a cemetery we excavated bearing remains of children who had been ritually sacrificed as burnt offerings. It is the largest sacrificial cemetery ever found, measuring at least 60,000 square feet. Most stunning is the number of children sacrificed here—estimated at a minimum of 20,000 burials between 400–200 BC during only one-third the life of the cemetery!

The Phoenicians’ barbaric practice of child sacrifice was well-attested in antiquity. Consider, for example, the comments of the Greek author Kleitarchos in the third century BC:

Out of reverence for Kronos (Ba'al Hammon), the Phoenicians, and especially the
Carthaginians, whenever they seek to obtain some great favor, vow one of their
children, burning it as a sacrifice to the deity, if they are especially eager to gain success.
There stands in their midst a bronze statue of Kronos, its hands extended over a
bronze brazier, the flames of which engulf the child. When the flames fall on the
body, the limbs contract and the open mouth seems almost to be laughing, until
the contracted body slips quietly into the brazier.

Ironically, the Carthaginians called the immolations the "act of laughing".

The American excavations unearthed nine stratified levels of Tophet burials. These have been divided into three basic periods:

The excavators named the periods after Tanit, the Canaanite goddess of love and war. Child sacrifices at Carthage were dedicated to her and to the god Ba'al Hammon, a name that means “Lord of the Brazier.” They were brother and sister, as well as husband and wife!

The manner in which we found the burials is quite revealing. First, we would uncover a cippus or a burial monument. A grave marker, of course, indicated that a burial lay beneath. A variety of inscriptions and motifs were engraved on some of the monuments. Many of them bore the cult symbols of Tanit and Ba'al Hammon. Others had carvings, such as a priest carrying a child to an altar in the usual position for offering a lamb. One read, “…breath for breath, blood for blood, life for life.”

We usually found two things in each urn: the charred remains of an infant or an animal, and different types of jewelry and trinkets that parents likely buried with the child. Valuable and well-crafted jewelry, such as ivory amulets were also often interred with the deceased.

Scholars vigorously debate the purpose of child sacrifice at Carthage. Some ancient cultures sacrificed humans to gain an increase from the gods. In Aztec culture, the most important time in the calendar was the month of first-fruits, when the Aztecs sacrificed children in the temple of Xipe, the god of planting and seedtime. At that time they also burned humans to the sun god Tonatiuh. The reason for those offerings was simply to pacify the gods so they would bless the Aztecs with good crops. 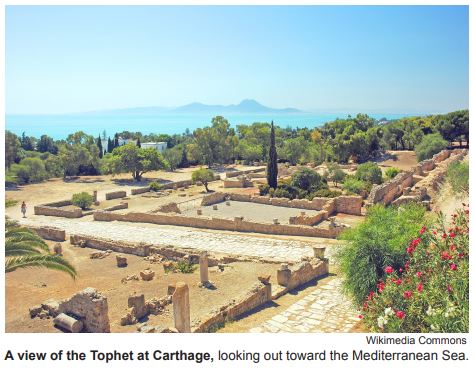 The ancient Australians believed the offering of a morsel of kangaroo fat made the fat of the kangaroo increase! So, if one wanted many crops, he would offer the first-fruits of the crops to the gods; if one desired a larger flock, he would sacrifice the first-born animals; if one hoped for the blessing of many children, he would slay his first-born to honor the gods.

Other cultures sacrificed humans in order to avert or dispel evil things. Thus, if one built a house or went to war, his children were sacrificed to keep evil or the bad gods away. In all of these instances, the object of child sacrifice was a form of manipulating the pagan deity. It was an attempt to satisfy the blood-thirstiness of the gods at the expense of certain individuals so that nothing was left to chance. Many scholars are convinced that this religious conniving was the basis of child sacrifice at Carthage.

These cultic rituals played a major role in the practice of child sacrifice at Carthage. However, they do not account for all aspects of it. For example, we should note that most children were sacrificed at Carthage when the city was at its height, prosperous and militarily powerful. Conversely, when Carthage was at its most vulnerable, during the wars with Rome, fewer child immolations occurred. If human sacrifice were merely for the intervention of the divine, we would expect the exact opposite. Why were there not more sacrifices later when Carthage really could have used the gods’ help? 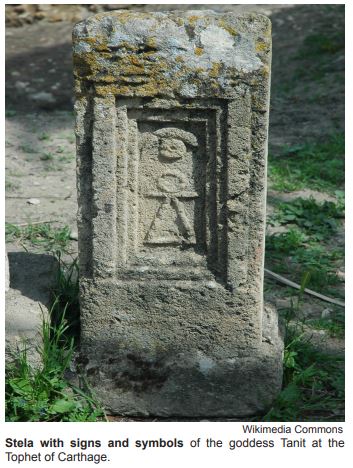 Such problems have led archaeologists at Carthage to suggest another possibility: what appeared at Carthage was really infanticide for the purpose of population control. In other words, child sacrifice was not merely religious ritual, but was also a practical solution to a civic problem overpopulation. We know that at its height Carthage sustained a population of about 200,000 people. Recent scholarly studies have shown that the agricultural capacity of the area simply could not support such a large group. So, archaeologists have theorized that the Carthaginians helped to ease the population strain by destroying a non-threatening segment of the city’s inhabitants.

Whether or not this theory is correct is debatable; we must await further materials from excavation and an analysis of literary remains before solid conclusions may be drawn. At this time, however, it does appear to be a plausible reconstruction of the evidence available to us. With that in mind, I would like to suggest that this theory raises some interesting parallels with modern abortion and infanticide practices. 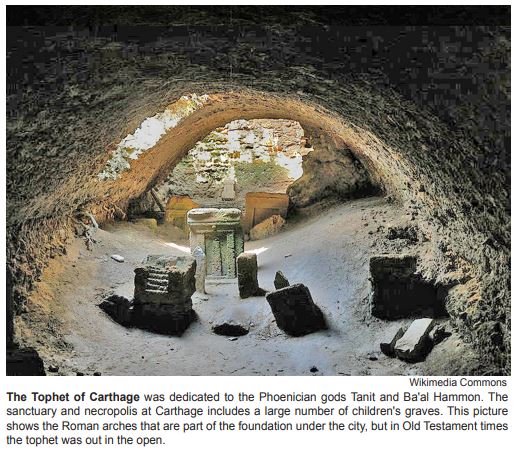 Rarely do pro-abortion groups today fail to mention what they perceive as a noble advantage of their position: abortion is a means of population control in a world that cannot sustain the people already here. In other words, since the world contains so many starving, unclothed, poor people, they claim we must take action; abortion and infanticide, they say, are proper means to help solve these social ills. Frankly, that appears to be the same logic used by the ancient Carthaginians.

Some critics have responded by saying that such a parallel is bogus because modern societies are more enlightened or “civilized” than ancient Carthage. Is this really true? Are we really more “civilized” than the Carthaginians?

It is interesting to note that of all the societies I have studied, primitive cultures have little evidence of abortion or infanticide; they are primarily the practices of the higher cultures of antiquity. It seems to me that the only enlightening difference between our societies and Carthage of old is that we have sanitized the process. We do not offer our children to some idol; we destroy them in a hospital, in a most orderly and hygienic fashion. Ours are sacrifices of convenience without any façade of religious motivation. In truth, we are merely unmasked Carthaginians.

(Reprinted from Ministry magazine, Vol. 12, No. 2, Summer 1993, by permission of Reformed Theological Seminary.)

John Currid is Carl W. McMurray Professor of Old Testament at Reformed Theological Seminary, Charlotte, NC; PhD, University of Chicago. Dr. Currid has been part of the Reformed Theological Seminary faculty for 15 years, serving as both Chair of the Biblical Studies Division in Jackson and Professor of Old Testament in Charlotte. Prior to coming to RTS, he served as Associate Professor of Religion at Grove City College, as Byington Hebrew Teaching Fellow at Gordon-Conwell Theological Seminary, and as a member of the faculty at Jerusalem Center for Biblical Studies in Jerusalem, Israel. Dr. Currid serves as Project Director of Bethsaida Excavations Project in Israel (1995–present). He lectures and preaches in many countries including Russia, Ukraine, Great Britain, Australia, and Brazil. He also continues a pastoral ministry in the Associate Reformed Presbyterian Church.