The Testimony of the Didache

The Didache, also called the Teaching of the Twelve Apostles, is a late first century AD Christian document and is one of the earliest extra-canonical Christian texts known to exist. For a period of time, some Church Fathers considered it to be part of the NT canon. It was previously known only through secondary sources, such as Eusebius’ Ecclesiastical History. Approximately the size of the epistle to the Galatians, it contains three main sections, primarily dealing with Christian ethical conduct.

Chapter two contains a list of prohibitions, clearly derived from Old and New Testament ethical admonitions. Of particular interest is Didache 2:2, which states:

Hilarion to his sister Alis, many greetings, likewise to my lady [his mother] and Apollonarion [likely his son]. Know that we are still even now in Alexandria. Do not worry if they all come back and I stay in Alexandria. I urge and beg you, be concerned about the child and if I receive my wages soon,  I will send them up to you. If by chance you give birth, if it is a boy, let it be, if it is a girl, throw it out. You have said to Aphrodisias, “Do not forget me.” How can I forget you? So, I urge you not to worry (emphasis added).

Discovered amongst thousands of papyri at Oxyrhynchus, Egypt, in the late 19th century, this letter exemplifies ancient attitudes about infants and children. Note the casual and flippant way in which the father discusses family business, tells the mother to throw the baby out, then returns to other concerns.Several important observations should be made from this important text. First, we clearly see that the earliest Christians recognized that a child’s life should be protected, whether inside or outside the womb. Second, there is no distinction made between them concerning personhood; both are equally human. The Greek term used here for child is teknon. It is found in the NT in many places, and refers to children of varying ages. The non-canonical Epistle of Barnabas (19:5) contains identical phraseology concerning the condemnation of abortion. The early Church recognized the unborn child as a teknon, and so should we. Third, the writer uses distinct terms to distinguish the act of killing the child inside or outside the womb. For the child outside the womb, the common Greek term for killing is used, apokteinō. For killing the unborn child in the womb, the specific Greek term used is phthora, which is often translated as corruption, ruin, decay (Rom 8:21). Ancient writers such as Josephus, Plutarch, Philo and Clement of Alexandria use this particular term to describe ancient abortion as well.

The author of the Didache no doubt mentions abortion and the killing of infants because of their prevalence in the ancient world. The medical risks associated with aborting a child in the womb were great, yet, there was still a willingness to commit such a dangerous and horrific act. Killing a newborn through abandonment and exposure was much more common. Many studies have been undertaken to document these horrors, both in the Roman Empire and throughout the ancient world generally.

Consider, for example, an excerpt from a letter from a certain Hilarion to his “sister” (i.e., his wife), in which he tries to manage family life while earning a living in the distant metropolis of Alexandria: 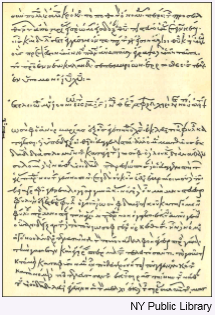 The most complete and best preserved manuscript of the Didache is called
the Jerusalem Manuscript (H) and is dated to the 11th century AD. A Greek
parchment containing several Christian writings, it was re-discovered in 1873
by Philotheos Bryennios in the monastery of the Holy Sepulcher in
Constantinople. Included was the text of the famous Didache.

Similarly, we can only imagine the millions of casual conversations that have taken place in the present day, whereby men and women frivolously discuss aborting a precious child in the womb. Government policy creates conditions for a rampant and indifferent culture of death. Legalized infanticide sears the human conscience, reminding us of the sober words of the prophet: “Woe to those who call good evil, and evil good...” (Isa 5:20). Our nation is not unlike the author of this letter, or the ancient citizens throughout the Roman Empire and beyond. May we pray for our nation’s heart, mind and conscience to be turned to the righteousness of the Gospel, and for moral transformation from within so that we might corporately turn from destroying children in the womb.