Home » Research » Devotionals » Apollos: Eloquent and Mighty In the Scriptures

Coming and Going: Doors and Doorways in the Biblical World

As a pastor in Frederick, Maryland for almost two decades, I visited thousands of homes in the community. In order to earn the right to share my message with those in each house, I soon learned the importance of being able to make a connection with them. One of the ways I learned to do that was to pay attention to the things that were visibIe in their home and attempt to find common ground about it. Redskins gear was an easy connection for me, Dallas Cowboy stuff was not!

I got pretty good at this, even to the point where I could understand quite a bit about these people by what I saw. I also began to see how I could apply this same concept in my Biblical studies, too. In order to understand and explain people of the Biblical world better, I got interested in archaeology and what was found in the houses of ancient people. In fact, my master's thesis focused on this very subject - 'Domestic Architecture in Iron Age I Palestine' (the time of the Judges).

For 7 seasons, it has been my privilege to participate in the Tall el-Hammam Excavation Project (TeHEP) on the Jordanian side of the Jordan River Valley. Working on both the site's upper and lower tells, we have excavating numerous buildings from different periods of the Old Testament.

Trench 28 on the Lower City at Tall el-Hammam, Jordan

We have discovered many fascinating public structures, including palaces, a temple, stone and mudbrick city walls and gates. Yet there have also been a number of houses from both the Iron Age (around the time of King Hezekiah in Judah) and Bronze Age cities (the period of the book of Genesis).

While I have spent much of my academic life researching and writing about ancient houses, I had not personally spent much time actually excavating one until 2009 at Tall el-Hammam (TeH). That season, in Trench 28 on the site's Lower City, we excavated both Early and Middle Bronze city walls and a residential quarter built inside them.

In one square, we found the corner of two mudbrick house walls sitting on stone foundations - standing almost 5 ft high, and about 2.5 ft wide. These walls were constructed of mold-made sundried mudbricks, the standard construction material of the region throughout the Bronze Age.

With the mortar between these bricks was typically of the same composition as the mudbricks, themselves, these house walls would have been kept stable against the weather by regularly plastering their external face. Covering the interior face with plaster was a matter of convenience, cleanliness and aesthetics and made painting the room possible. Unfortunately, we did not detect plaster on either face of our house walls. 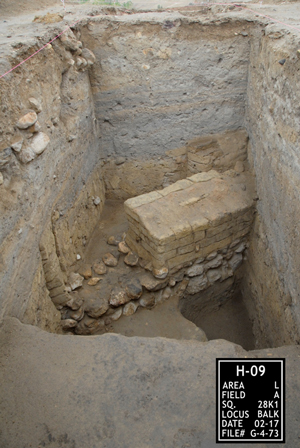 As we were excavating the walls of this house, we found a void which I didn't understand at first. Then it became clear - I was excavating my first ancient doorway! About 3 ft wide, the door's threshold was just a continuation of the mudbrick wall's stone foundation.

In the room created by these two cornering walls, we also found the door's lower socketstone in situ (still sitting in place on the ground). Not part of the stone threshold, it was just inside the room to the left of the doorway, indicating the door opened into this room. Also sitting in destruction debris from the collapse of the house within that same room was the door's upper socketsone.

In the space on the other side of that wall and doorway we found a large hole-mouth jar buried beneath the floor. Cracked and burned, it had apparently been used first for cooking and later retired as a subterranean storage installation.

Two seasons later, in the adjacent square to the east (Trench 27), we found additional house walls indicating we were clearly in a domestic quarter of the city. These walls were also constructed of mudbricks on stone foundations, about 2.5 ft wide and still standing up to 3 ft high. 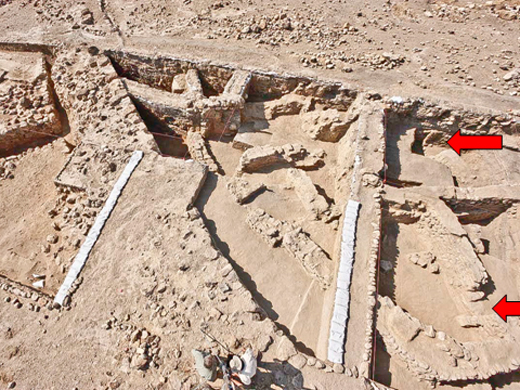 The situation of this house wall was different than the first one. While the earlier house walls were about 6 feet beneath the surface, the top bricks still in situ from this wall were actually exposed on the surface. We just couldn't recognize them until we started excavating. 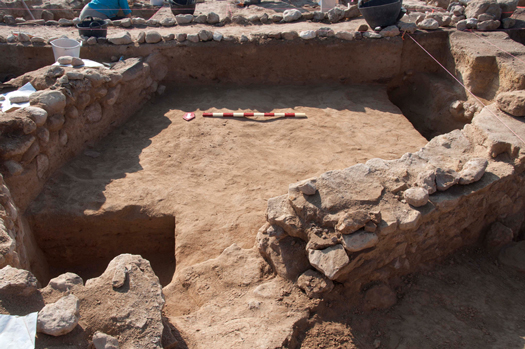 Doorway in house of Trench 27 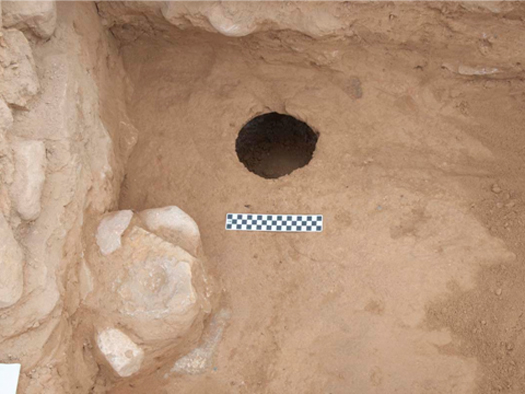 Based on our current state of knowledge about Bronze Age domestic architecture here and elsewhere, each house had a singular front door that separated the private realm of the family from the public realm of the community. A wooden door swung open and closed attached to a doorpost which rotated inside upper and lower socket stones. These socketstones were situated inside the house.

I have never really paid attention to door thresholds in my world and hardly ever heard them discussed - except in old movies when a groom carried his bride over the threshold of their house. But the front door threshold of ancient houses was probably as important symbolically as it was utilitarian. Raised higher than the ground outside or the floor inside, the threshold was critical for closing up and securing of the house and helped keep debris outside.

In antiquity, domestic thresholds were constructed of stone. Outside, dirt and debris would build up (especially during the rainy season) and slightly raise the ground level year by year. The threshold kept the interior of the house cleaner and in some cases served as a step down into the house. While front door thresholds of houses are mentioned a few times in the Old Testament (Ju 19:27; 1Kgs 14:17), there is no accompanying description given. 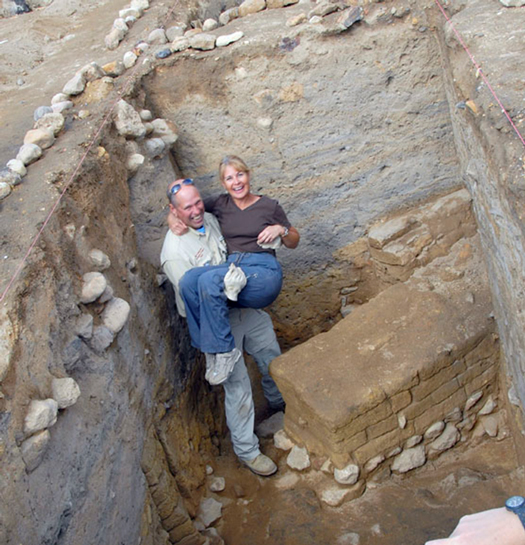 Photo 6. Author carrying his wife over the threshold of Early Bronze Age house at Tall el-Hammam

The two sideposts/jambs of our TeH doorways were unclear and since the mudbrick side walls only extended about 3 feet above the threshold, there was no indication of the height or nature of the door's lintel (although assumed to be of wood). Both lintels and doorposts are mentioned as part of Israelite houses in Egypt - where the blood of the Passover lamb was put (Ex 12:7). The doorposts were also the part of the Israelite houses in Canaan where they were to write the words of Deuteronomy 6:9; 11:20.

The upper and lower front door socketstones represent the hinges of Proverbs 26:14: 'As a door turns on its hinges, so a sluggard turns on his bed.' This proverb refers to the door being attached to the vertical post which turned in the upper and lower socketstones ('hinges'). Some translate 'hinges' as 'pivots,' because the Hebrew word for this noun comes from the verb meaning 'to turn'). The door does nothing but turn back and forth in the socketstones and the lazy guy does nothing but turn back and forth on his bed. He can't be counted on him for anything else - quite a metaphor.

It seems that interior doorways of these ancient houses were apparently not generally constructed with thresholds or socketstones. Probably not built with much precision or care, it is likely these interior doorways did not even have permanent doors.

Possibly blocked by a large movable wooden frame, it is more likely these interior doors utilized hanging mats of straw or woven fabric. Such a situation provides an interesting context for the prohibitions of familial relationships in Leviticus 18, 20.

So, if our understanding is correct, we have two front doors of two separate houses. On one side of the doorway, where the socketstones are located, is the front room of the house. On the other side of the front door would probably be the house's unroofed courtyard. Unfortunately, since these two structures are sitting at different levels, it is not clear what their relationship might be to each other. It does look like we also have an interior house doorway in a complex of other house walls in Square 28L (see plan). 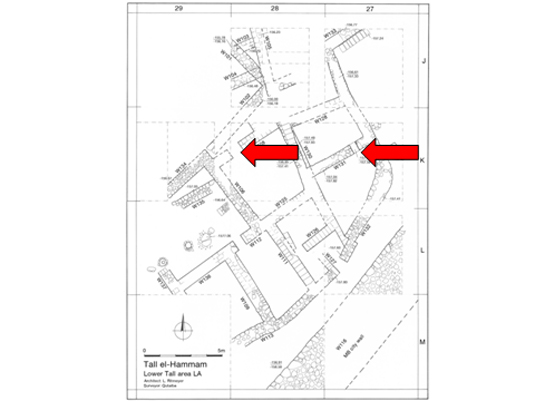 Plan of the domestic quarter in the Lower City of Tall el-Hammam. In square 28K is the first house doorway and in square 27K is the second doorway. Possible interior doorway is in square 28L.

When we get back into the field in 2013, while most everyone else will be interested in the city gates, walls, temples and palaces, I will be focused on a closer look at these houses. It's the best way I can think of to get to know the ancient people of the Biblical better.

Walking through these doorways at Tall el-Hammam takes us right back into the Old Testament world. They lead to rooms where Bible characters would have felt very much at home - with their mudbrick walls on stone foundations, dirt floors, subterranean grain storage installations and doors swinging on upper and lower socketstones. 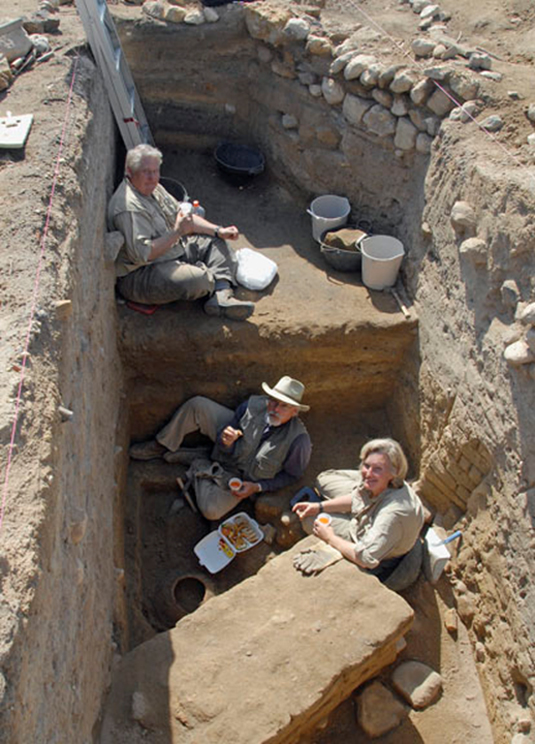 TeHEP Director Steve Collins, Assistant Director Carroll Kobs and her husband, Jeff, having the first meal in this house in over 4,000 years

Real people in Bible times actually lived in these houses and walked through these doorways at Tall el-Hammam. Here Bible verses get illuminated and Biblical characters become real people who actually lived and experienced the same God of the Scriptures we experience today. A walk through these doors could lead to a 'new' old world which might even make a permanent impact on our lives.

See Gary talk about 'Doorways in Archaeology' in this video clip.