The COVID-19 virus is on everyone’s mind these days. Many are calling it “a plague of Biblical proportions.” Is that a valid description? Yes and no. Definitions.net defines the statement “of Biblical proportions” as: “Of or pertaining to a natural disaster or other cataclysmic event so immense that it brings to mind biblical accounts of horrific catastrophes.”

The current pandemic finds no parallel in Scripture. The accounts of infectious plagues in the Old Testament are all local in nature and brought about by God’s judgement against the sins of Israel.  Probably the most widespread of these plagues was a three-day plague throughout Israel because David had conducted a census (1 Chronicles 21).  The only Biblical event that would be comparable to our present situation was Noah’s Flood, which was world-wide. That seems to be what people have in mind when they use the expression “of Biblical proportions.”

As if the world did not have enough to worry about, there is currently a plague of locusts ravaging east Africa.  The UN released the following statement: “This is a scourge of biblical proportions…Yet as ancient as this scourge is, its scale today is unprecedented in modern times” (www.un.org).  Locust plagues are familiar to us in the Bible, especially as the eighth of the ten plagues against Egypt at the time of the Exodus:

Moses stretched out his staff over Egypt, and the Lord made an east wind blow across the land all that day and all that night.  By morning the wind had brought the locusts; they invaded all Egypt and settled down in every area of the country in great numbers.  Never before had there been such a plague of locusts, nor will there ever be again.  They covered all the ground until it was black.  They devoured all that was left after the hail—everything growing in the fields and the fruit on the trees.  Nothing green remained on tree or plant in all the land of Egypt.  (Exodus 10: 13–15) 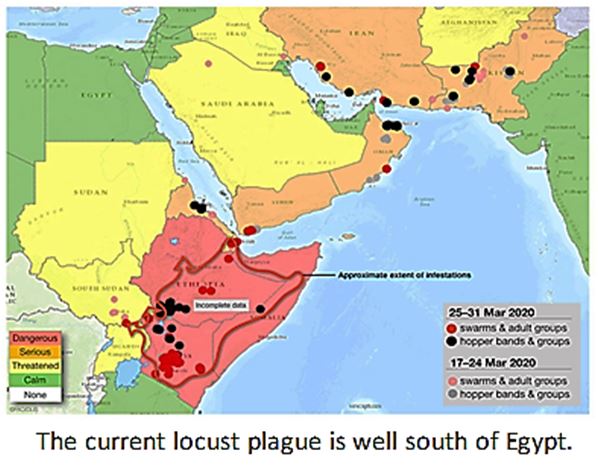 In Memory of COVID-19

The end is near, the pundits say,

The plague of death has come our way;

The politicians wring their hands,

Their “what to do’s” are in all lands.

Scarce help, it seems, from medicine,

Or from good wishes, cheerful word,

What folks should say, or should be heard.

Has ever such a thing occurred

Through history’s long and winding past?

T’was thus and more in God’s own word;

The plagues in Egypt strong and vast.

Blood and frogs and gnats and flies;

Livestock slain and boils and hail,

Death of child, were all just lies?

Through all we read did sin prevail?

No! The Scriptures loud proclaim,

Those of faith were spared and more.

They lived and stood in Yahweh’s Name.

One lesson that comes through loud and clear in all of this is that God is in control!  Who would think that a tiny microscopic organism could bring the mighty United States of America and the other countries of the world to their knees?  The only certainty that we have in this life is that as believers in Jesus Christ we have been washed in His blood and have an eternal home with Jesus waiting for us in heaven, no matter what may come to pass on earth.  This is good news that we can share with our neighbors, friends and family.  Even though our country is in “pause” mode, the bills keep coming in.  Your continued support is much needed and appreciated during this difficult time.