The Tel Dan Stela and the Kings of Aram and Israel

A people known as the Arameans lived in the regions of Syria and Mesopotamia in antiquity. They were a large group of linguistically related peoples who spoke dialects of a West Semitic language known as Aramaic. Although not politically unified, they developed powerful city-states that had a strong cultural influence in the Near East in the first millennium BC. The Aramaic language, very similar to Hebrew, became the official international language during the Persian Period, ca. 539.

The nation of Israel was in conflict with the Arameans for about 300 years, from the time of David, ca. 1000 BC, until Assyria annexed the Aramean city-states at the end of the eighth century BC. Most of the conflict was with the city-state of Damascus that, under Hazael, dominated Israel in the second half of the ninth century. A recently discovered inscription, the Tel Dan Stela, takes us back to those days.

Discovery and Significance of the Tel Dan Stela

The largest fragment of the Tel Dan Stela, Fragment A, was discovered at Tel Dan in northern Israel in July 1993 (Biran and Naveh 1993; Wood 1993). Then, in June 1994, two additional joining fragments, labeled Fragment B, were found (Biran and Naveh 1995). Together, Fragments A and B represent only a fraction of a much longer inscription. The language is Aramaic and it celebrates the victory of a king of Aram over Israel and Judah. It is the first royal inscription from the kingdom period to be found in Israel. 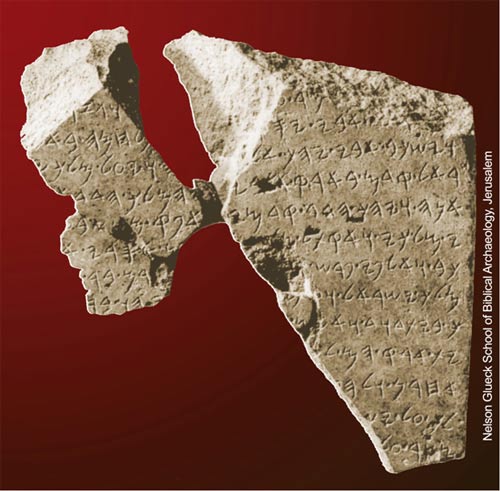 The most stunning aspect of the document is the reference to Judah as the “House of David.” For the first time, it was thought, the name David appeared in an extra-Biblical document. At about the same time, however, two French scholars, André Lemaire (1994) and Émile Puech (1994), independently recognized the same phrase in the Mesha Inscription, which has been around for well over 100 years (Wood 1995). It now likely that the name David is in a third inscription. Egyptologist K.A. Kitchen believes that the phrase “highland of David” appears in the Shishak inscription in the Temple of Amun at Karnak, Egypt (1997: 39–41). All this at a time when a number of scholars were challenging the existence of the United Monarchy and a king name David!

Unfortunately, the beginning of the Tel Dan Stela is missing. This is where the name of the king who commissioned the memorial, and the event which occasioned it, would have been recorded. With the discovery of Fragment B, however, we can assign the stela’s place in history with near certainty. Parts of the names of two kings are preserved in Fragment B: Joram, son of Ahab, king of Israel from 852 to 841 BC, and Ahaziah, son of Jehoram, king of Judah (the House of David) in 841 BC. With this new information it is possible to assign the stela to Hazael, king of Aram-Damascus, who undoubtedly set it up in Dan to commemorate his victory over Joram and Ahaziah at Ramoth-Gilead in ca. 841 BC (2 Kgs 8:28–29).

In this article we will consider six kings associated with the stele: the predecessor of Hazael, (Ben-Hadad II), Hazael, Joram, Jehoram, Ahaziah, and Jehu. Because of the fragmentary nature of the stela, there are gaps in the lines that allow a number of interpretations. The translation below is that of the original publishers of the inscription, Avraham Biran and Joseph Naveh (1995). The numbers are the line numbers of the inscription and the sections inside the brackets are the restored portions.

Ivory carving found at Arslan Tash, Syria. A cache of ivories found at the Assyrian outpost of Arslan Tash was undoubtedly booty taken from Hazael’s palace in Damascus. The regal figure depicted on this piece is probably Hazael himself. (Louvre Museum, Paris)His Career

Hazael ruled for some 42 years, ca. 842–800 BC, and was the most powerful king of Aram. He is referred to numerous times in the Old Testament, as well as in contemporary Assyrian inscriptions.

The fulfillment of Elisha’s prediction that Hazael would bring harm to Israel began shortly after he took the throne. He defeated the combined armies of Israel and Judah at Ramoth Gilead, 50 km (30 mi) southeast of the Sea of Galilee. Hazael’s boast in lines 9 and 10 that he “set [their towns into ruins and turned] their land into [desolation]” most likely refers to his defeat of Israel and Judah at Ramoth Gilead.

Joram, king of Israel, was wounded in the battle. Ahaziah, king of Judah, went to visit Joram at Jezreel. It was at that time that Jehu assassinated both Joram and Ahaziah and became next king of the Northern Kingdom.

In lines 7 and 8 of the stela Hazael takes credit for the deaths of Joram and Ahaziah. Whether this was exaggeration, or Jehu acting as Hazael’s agent, we cannot say. It is interesting, however, that God commanded Elijah to anoint Hazael king (1 Kgs 19:15), a very unusual circumstance. God used Hazael to accomplish His purposes in the history of Israel and Judah.

For the next five years, ca. 841–836 BC, Hazael was taken up with invasions by the Assyrians, so did not bother Israel. Shalmaneser III in his 18th year (ca. 841 BC) engaged Hazael at Mt Senir. He bragged about killing 16,000 Aramean soldiers. He also captured 1,121 chariots, 470 cavalry horses, and Hazael’s camp. He besieged Hazael in Damascus and cut down his gardens (Oppenheim 1969: 280).

Booty of the temple of Sheru from the town of Mallaha, the royal residence of Hazael of Damascus (Oppenheim 1969: 281).

But Joash king of Judah took all the sacred objects dedicated by his fathers—Jehoshaphat, Jehoram and Ahaziah, the kings of Judah—and the gifts he himself had dedicated and all the gold found in the treasuries of the temple of the Lord and of the royal palace, and he sent them to Hazael king of Aram, who then withdrew from Jerusalem (2 Kgs 12:18). 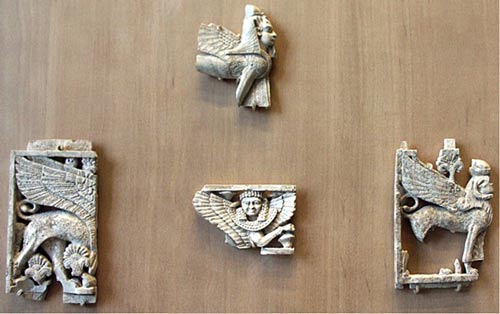 Ahab’s name originally appeared on the stela since Joram, his son, is listed in typical Near Eastern fashion as [...Jo]ram son of [...] in line 7. Ahab’s name, however, is missing since it was on a portion of the stela that did not survive. We have dealt with Ahab in an earlier article in this series (Wood 1996a), so we will not repeat that information here, but move on to his son Joram.

Following Ahab’s death, his son Ahaziah ruled for two years, 853–852 BC. He died in an accidental fall in the palace and left no son, so his brother Joram became next king of Israel (2 Kgs 1:2–17). The mention of Joram in the Tel Dan Stela is the first reference to this king outside the Bible. Joram reigned for 12 years (2 Kgs 3:1). Although he did evil in the eyes of the Lord, he was not as bad as his father Ahab and his mother Jezebel. The outstanding event of his reign seems to be the removal of the sacred stone of Baal that Ahab had made (2 Kgs 3:2).

Following his anointing by Elisha, Jehu went to Jezreel to assassinate Joram. He shot him in the back with an arrow as Joram was fleeing (2 Kgs 9:14–24). Jehu ordered Joram’s body to be thrown on the field of Naboth to fulfill a prophecy he heard after Naboth was murdered by Joram’s mother Jezebel (2 Kgs 9:25–26).

Jehoram was originally named in the Tel Dan Stela since Ahaziah’s father’s name was given. However, the section of the stela where his name appeared is missing. Jehoram became king when he was 32 years old and ruled for 8 years. He was one of the more wicked kings of Judah.

When Jehoram became ruler, he killed all of his brothers and other contenders for the throne (2 Chr 21:4). He married Athaliah, daughter of Ahab, and built high places on the hills of Judah (2 Chr 21:6, 11). During his reign the Edomites revolted. While attempting to subdue them, Jehoram and his commanders were surrounded. Fortunately, he was able to break through at night and escape to Jerusalem (2 Kgs 8:20–22).

Because of his wicked ways, Elijah the prophet wrote Jehoram a condemning letter. He told the king,

The Lord is about to strike your people, your sons, your wives, and everything that is yours, with a heavy blow (2 Chr 21:14).

Soon after, a coalition of Philistines and Arabs overran the palace and carried off all the goods of the palace, the king’s sons, with the exception of Ahaziah the youngest, and his wives.

As with Jehoram, the mention of Ahaziah in the Tel Dan Stela is the only reference we have to this king outside the Bible. Ahaziah came to the throne at the tender age of 22 and ruled for only one year. He was the youngest son of Jehoram, the previous king of Judah. The other sons had been carried off by the Philistines and Arabs (2 Chr 21:16–17).

Ahaziah followed the ways of his Israelite mother Athaliah and “did evil in the eyes of the Lord” (2 Chr 22:4a). The members of the family of Ahab his grandfather became his advisors (2 Chr 21:4b). They urged him to join Joram in his fight against Hazael at Ramoth Gilead which resulted in his premature death (2 Chr 21:5).

While Joram was in Jezreel recovering from the wound he received at Ramoth Gilead, Ahaziah went to visit him. He was in the company of Joram when Jehu struck him down. Ahaziah fled, but was caught and put to death by Jehu and his men (2 Kgs 9:27; 2 Chr 22:6–9). His body was brought back to Jerusalem and he was buried “with his fathers in his tomb in the city of David” (2 Kgs 9:28).

During Jehu’s reign Israel lost territory east of the Jordan to Hazael (2 Kgs 10:32–33). Jehu was also subject to Assyria as attested by the Obelisk of Shalmaneser, or the Black Obelisk as it is sometimes called. This monument was discovered by Englishman Sir Henry Layard in Calah, Iraq, in 1846. It depicts Jehu prostrate before the Assyrian king Shalmaneser, with Israelite emissaries bearing tribute behind him. (The picture of Jehu can be seen in this article). The inscription reads,

The tribute of Jehu, son of Omri; I received from him silver, gold, a golden saplu bowl, a golden vase with pointed bottom, golden tumblers, golden buckets, tin, a staff for a king, (and) wooden puruhtu (Oppenheim 1969: 281).

This is the only surviving likeness of a king of Israel or Judah. After ruling for 28 years, “Jehu rested with his fathers and was buried in Samaria” (2 Kgs 10:35).

The Tel Dan Stela is extraordinary in that it names eight Biblical kings: Ben-Hadad II, Hazael, Joram, Ahab, Ahaziah, Jehoram, David and Jehu. It was most likely erected following Hazael’s defeat of Joram and Ahaziah at Ramoth Gilead in ca. 841 BC (2 Kgs 8:28–29). The occasion for the breaking of the stela was probably when Jehoash, king of Israel from 798 to 782, recaptured Israelite territory previously taken by Hazael (2 Kgs 13:24–25). It appears that the monument stood in Dan near the city gate for over four decades. It was a constant reminder to the Israelites that they were subject to the Arameans. When the tide of political power shifted, the Israelites gained the upper hand and the hated stela was broken into many pieces, some of which were reused as building material.

The importance of the Tel Dan Stela lies not in its record of history, because the Bible gives a much fuller account. Its importance, rather, lies in the fact that it is an independent, contemporary, witness to the events of ca. 841 BC and the accuracy of the Biblical record.