Home » Research » Search by Topics » Egyptology » Egypt and the Bible

Egypt and the Bible

The land known today as Egypt has remained a remarkable constant through the millennia in Africa's northeast corner. The modern name 'Egypt' is Greek (Aigyptos), originating in the hieroglyphic hi-kuptah, 'palace of the ka (soul) of (the god) Ptah.' Called Misr in Arabic today, it was Misrayim (Hebrew) in the Old Testament. Mentioned among the world's initial 70 nations in the Table of Nations of Genesis 10, Misrayim was listed with the sons of Ham who settled Africa. Misrayim, dual of Misr, seemingly reflects the dual nature of ancient Egypt.

Egyptians called their country the 'Two Lands,' considering the Nile Valley as Upper (southern) Egypt and the delta as Lower (northern) Egypt. Each was symbolized by a plant native to their region: the lotus (water lily) in Upper Egypt and the papyrus in Lower Egypt.

They also referred to their country as the 'Black Land' (kemet), alluding to the inhabited river valley and delta. That was opposed to the 'Red Land' (deshret), the desert-the Arabian Desert to the east and the Libyan Desert to the west.

Throughout history, Egyptians lived almost exclusively in the Nile River Valley and its expanded delta. Only ten percent of Egypt's surface, it has supported 99 percent of the nation's population from earliest times. Because the region receives minimal rain, the Nile's annual flood has been critical for Egypt's continuance.

The Nile originates far to the south. The White Nile begins at Lake Victoria in Uganda and travels almost 1,600 km (1,000 mi) to Khartoum in Sudan. There it joins up with the Blue Nile originating at Ethiopia's Lake Tana. 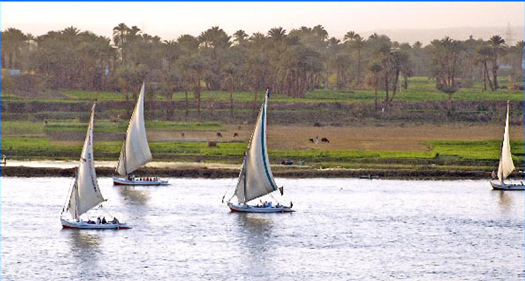 Broad sail feluccas on the Nile at Luxor in Upper (south) Egypt. The current carries a ship down the Nile (north) to the delta, and a strong daily southerly wind enables sailing vessels to navigate back up the Nile (south). Understood very early in antiquity, sailing on the Nile was known as far back as the Old Kingdom.

From Khartoum the united Nile flows north to the Mediterranean with hardly a single tributary contributing to its waters. The Nile has six cataracts, or falls, between Aswan and Egypt's southern border. Numbered from the north, the region of the cataracts was known as Nubia in antiquity. After the First Cataract, the river is easily navigated to the Mediterranean, and the river valley begins to widen into agricultural fields.

About 160 km (100 mi) from the Mediterranean, the Nile breaks into a number of branches, seven in antiquity. Fanning out to over 240 km (150 mi) and widely inhabited throughout antiquity, this was Lower (northern) Egypt.

While most of the world's well-kown rivers flow toward the Equator, the Nile flows north to the Mediterranean. Receiving minimal rainfall, Egypt depends on the Nile's constant flow of fresh water and its annual flooding (prior to the Aswan Dam) of the river valley's agricultural fields. Annually, from August to October, the Nile's flood covered the valley's agricultural fields with up to 2 m (6 ft) of water for as much as 45 days, peaking in September. The flood annually deposited a thin layer of fresh silt, refreshing the existing soil. Its timing allowed grain plants to mature in the winter without further watering.

Pharaohs generally constructed their tombs on the Nile's western bank. In the north, during the Old Kingdom, royalty and nobility constructed pyramids in the desert sands. Pictured are the Pyramids on the Giza Plateau, the oldest and only remaining of the Seven Wonders of the Ancient World. Constructed long before the Israelites entered Egypt at the place where the Nile breaks into the delta, it is very likely that many of the Bible's most important characters saw them; including Abraham, Jacob, Joseph, Moses, Joshua, Jeremiah and even baby Jesus.

To maximize the flood's potential, ancient Egyptians developed a sophisticated complex of canals and reservoirs to irrigate and conserve water. Banks of soil often enclosed agricultural fields into large level basins to allow an even spreading of the flood's silt. Canals and dikes regulated the flow of water into and out of each agricultural basin (Williams 1992: 1113-14), and as floodwaters receded from each basin, seeds were planted. Such agricultural practices seem to be noted in Deuteronomy 11:10: 'The land you are entering to take over is not like the land of Egypt, from which you have come, where you planted your seed and irrigated it by foot as in a vegetable garden.'

While flowing north through Egypt, the Nile still sustains navigation in both directions. With minimal land routes through the desert, seafaring in both directions was essential. Navigation northward simply rode the current to the Mediterranean, but the regular southerly wind allowed sail powered vessels to navigate upriver. In fact, the hieroglyph for traveling south (upstream) was a boat under full sail, and for traveling north (downstream) a boat with a steering oar and folded sail (Craig-Patch 1997:139).

While the desert on both sides of the Nile Valley was virtually the same, ancient Egyptians made quite distinctive choices about how they would live along each of the river's banks. Throughout antiquity most cities were built on the Nile's east bank. This was the side from which the sun rose every morning, an important symbol to ancient Egyptians. On the west bank, where the sun disappeared every night, they regularly had their cemeteries, royal tombs and mortuary temples. Yet, numerous communities of artisans, laborers, priests and guards, of necessity, lived on the west bank, devoting their lives to the construction, maintenance and security of the royal necropolises.

Bounded by the Mediterranean on the north, the desert on the west, mountains and the Nile's First Cataract in the south, ancient Egypt's eastern border was protected by a series of natural and man-made features. Stretching from the Mediterranean on the north was a canal that led into Ballah Lake. Additional canals connected Timsah Lake, the Bitter Lakes (Greater and Lesser) and finally the Gulf of Suez. Seti I (1291-1279 BC) depicted the northernmost strip of canal on the north side of Karnak's Amun Temple northern wall. Here the Pharaoh is seen crossing the northern Sinai toward the canal defending Egypt's east border along Egypt's main military road. Depicted as fortified by five forts and a bridge across the canal, it was called the 'Way of Horus' by the Egyptians and 'the road through the Philistine country' in the Bible (Ex 13:17). Starting at the delta city of Ramesses, it led to Canaan's coast where the Philistines settled in the 12th century BC.

Although not part of Egypt proper, the Sinai stayed under Egyptian control throughout antiquity. It was separated from the delta and Egypt proper by the Red Sea's western extension, the Gulf of Suez. The military and traders used the ancient road along the Suez's east side. 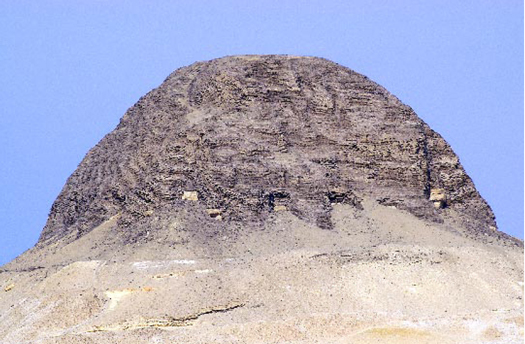 Pyramid of 12th Dynasty Pharaoh Sesostris II at El Lahun in Lower Egypt was constructed during the 19th century BC. The Biblical date suggests this was the Pharaoh under whom Joseph rose to the position of Vizier in Egypt. As the most powerful man in the kingdom, Joseph probably visited, maybe even had authority over, the construction of this pyramid. Also built on the Nile's western bank, this was a Middle Kingdom Pharaonic tomb, though much smaller than the Giza pyramids.While both modern and ancient Egypt totals almost 1 million square km (400,000 square mi), only the Nile River Valley has been continually inhabited. To control Egypt, one simply needed to control the Nile River Valley. In prehistoric times (that is 'before writing' at the end of the fourth millennium BC), numerous citystates joined into two kingdoms-Upper Egypt (south) and Lower Egypt (north).

Upper Egypt controlled the Nile from the First Cataract to near Memphis at the head of the delta. Covering a long area, it centered only along the Nile. The spread-out delta of Lower Egypt actually had a similarly inhabited area. 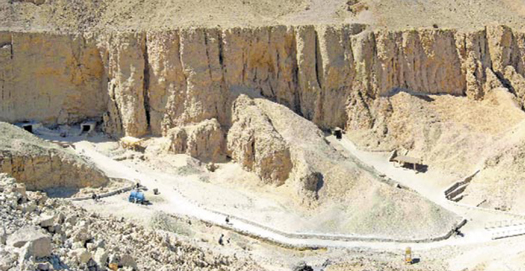 View of the Valley of the Kings on the Nile's west bank in Upper Egypt, looking northwest. The first tomb in this royal cemetery was constructed by the 18th dynasty Pharaoh Thutmosis I (16th century BC). Dating from the 18h to the 20th dynasties, there are 62 different tombs carved into the mountainside in this valley. The walled-in area to the right of center is the entrance to the most famous tomb in the valley, that of Tutankhamun, or 'King Tut,' the boy king who ruled from 1334 to 1325 BC. Howard Carter discovered the tomb largely intact in 1922. The magnificent treasures from Tut's tomb are on display in the Egyptian Museum in Cairo.

Egyptian history is divided into three major kingdom periods (Old, Middle and New) separated by two periods of disorder (First and Second Intermediate periods). During the Old Kingdom, the pyramids and sphinx were built; Abraham visited Egypt during the First Intermediate period. Joseph entered Egypt and rose to power during the Middle Kingdom. In New Kingdom Egypt, Moses was born and led the Exodus, while 100 years later the boy king Tutankhamen ruled for a decade.

'The road through the Philistine country' (Ex 13:17) was specifically noted as not being the Exodus route. This well-fortified ancient road along Sinai's northern coast, known as 'the Way of Horus' to the Egyptians, was the main military road to the east. This highway is depicted in Seti I's relief on the northern wall of Karnak's Amon Temple. Seti I (1291-1279 BC) in his chariot is returning to Egypt. Before his chariot are prisoners approaching a canal separating the Sinai from Egypt (above right). Egyptian citizens are depicted facing the victorious king and giving him homage. Other parts of the relief show four different forts on the canal's Sinai side and another on the Egyptian side at the site of a bridge across the canal. This canal was an important feature in defending Egypt's eastern border from the Mediterranean to Ballah Lake further south.

After the New Kingdom, Egypt lost its hold on foreign lands. During this time, known as the Third Intermediate and Late periods, Egypt was often controlled by foreign rulers (Weinstein 1997: 200). Egypt came under continuous foreign rule with the arrival of Alexander the Great (332 BC). Not until AD 1952, with Abdel Nasser, did a native Egyptian again rule Egypt.

Biblical events in Egypt occur almost exclusively in Lower Egypt, where the Israelites settled in Goshen. Abraham, Joseph, Jacob and Moses all lived in the eastern delta. Jeremiah, and even the Holy Family, also would have visited the delta region. Yet, the Pharaohs of these Biblical events are best known to us today by their mortuary temples and tombs in Upper Egypt. To study the Bible in Egypt, one has to see it all! 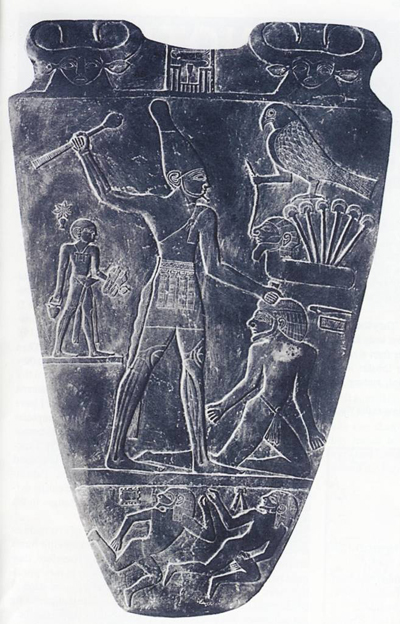 Narmer Palette. Over 100 years ago, within an ancient Egyptian temple in the Upper Egyptian city of Hierakonpolis, archaeologists found this decorated slate palette, generally used to grind cosmetics. Known today as Narmer's Palette, it depicts Narmer (inscribed in hieroglyphs between the horned heads at the top) smiting an enemy with a battle mace. On this side of the palette, he wears the domed crown of Upper Egypt. On the palette's other side Narmer wears the curled crown of Lower Egypt. Wearing the crowns of both Upper and Lower Egypt suggests he was king of a united Egypt, probably the first in history (around 3100 BC). The mace in Narmer's hand is similar to a stone mace head found in the excavation near the palette. Carved on the mace head are another king and a scorpion. Known as the Scorpion King, he also wears Upper Egypt's crown, apparently reigning prior to Narmer (around 3250 BC). The scene on the mace head depicts the Scorpion King participating in a hydraulic activity, no doubt related to the Nile's inundation.