Traveling with the French army when Napoleon invaded Egypt in 1798 were 175 scientists. They studied known sites as well as previously unknown places. 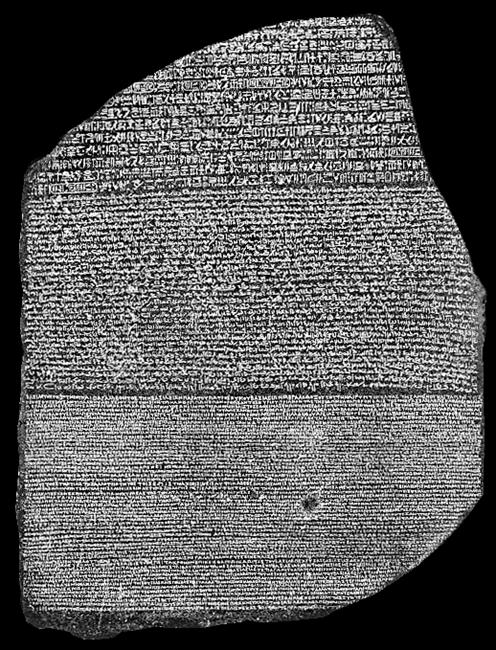 Their research resulted in a 24-volume publication that became the foundation for the modern field of Egyptology. Their most important discovery was made in 1799, near the village of Rosetta. Here French Army Captain Boussard found a stone monument written in three different languages. Later captured from the French by the British, this monument, now known as the Rosetta Stone, ended up in London's British Museum.

The monument's top 14 lines are written in hieroglyphs, Egypt's oldest script; then 32 lines of Egyptian demotic (a cursive form of hieroglyphs); and finally 54 lines in Greek. The Greek was easy for scholars to read-it was a decree by Memphis priests in 196 BC honoring Egyptian King Ptolemy V. At the time, no one could read the other two scripts.

In 1822, Frenchman Jean-François Champollion recognized that the monument contained the same decree in three languages. Going from Greek to demotic, and from demotic to hieroglyphics, Champollion could finally read the entire monument. It became the key to unlocking our understanding of hieroglyphics, ancient Egypt's first written language. This, in turn, led to the translation of many Egyptian texts that corroborate and illuminate Biblical history.