Imagine you’re sitting at the desk of a renowned biblical archaeologist. In front of you are his field notes and several important artifacts relating to biblical people, places and events. You now have the opportunity to investigate the archaeological evidence for the reliability of the Bible first-hand in a tangible way.

Doug Powell from Selfless Defense has designed an app to give laypeople a similar, virtual experience. iWitness Biblical Archaeology (available for both iPad and Android tablets for $2.99, as well as in book form at Amazon) takes readers on an interactive journey through the world of biblical archaeology, highlighting major discoveries that relate to Scripture. The app presents scholarly material in a simple yet visually engaging way for the average reader who doesn’t want to wade though a lot of technical jargon, but rather wants an overview of the relevant information. Presented as a series of documents and artifacts, the reader can tap on each journal or artifact to have it pop up for further study. Think of it as an interactive investigation into the reliability of the Bible that a teenager in youth group or a senior seeker can make on their iPad or Android tablet.

Doug Powell is a Christian apologist, author and graphic designer. He holds a Masters in Apologetics from Biola University and is the author of The Holman QuickSource Guide to Christian Apologetics. He has also contributed to the Apologetics Study Bible and the Apologetics Study Bible for Students. Doug taught himself how to program apps in order to release his iWitness books on tablets. In addition to the iWitness Biblical Archaeology app, there are six others in the iWitness series: Resurrection iWitness, Jesus iWitness, Old Testament iWitness, New Testament iWitness, iWitness Heresies and Cults, and iWitness World Religions.

iWitness Biblical Archaeology begins with a general introduction about what archaeology is and how it relates to the Bible. It goes on to note that while the Bible is not a history textbook, it does claim to record actual history. The factual existence of these people, places and events, as well as the cultures of various nations that are described in the Bible, can be evaluated through archaeological evidence. The introduction ends with a caution that, "archaeology is not an exact science and because the evidence is always, by nature, fragmentary, the claims about what it confirms should not be overstated." 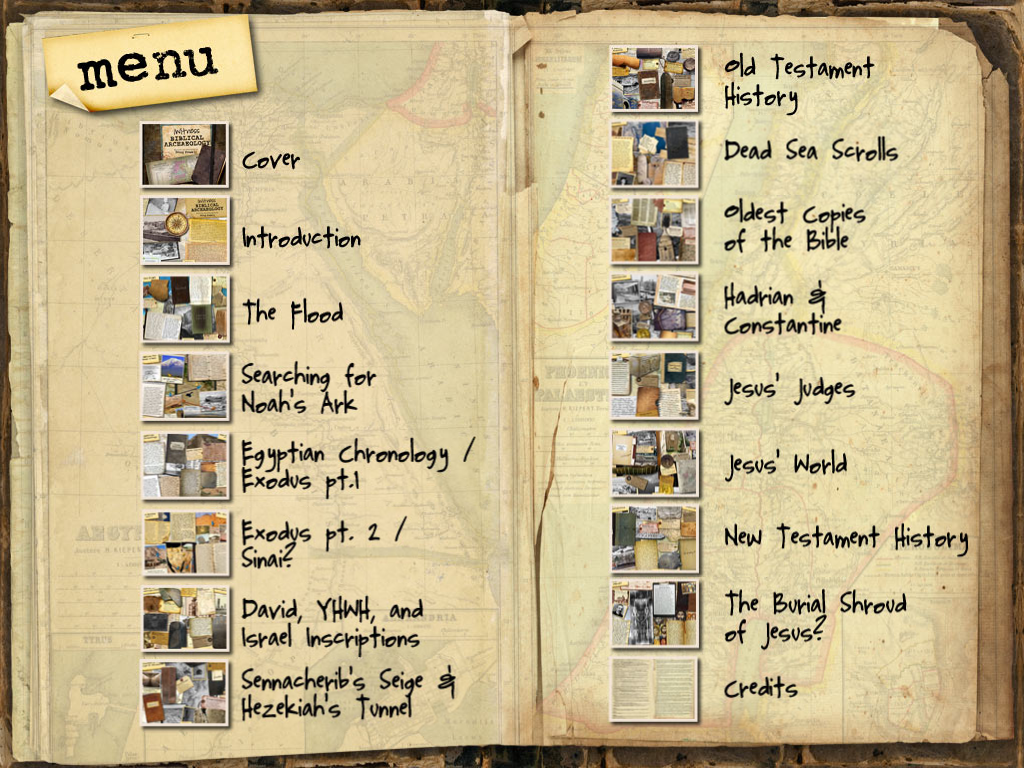 Three are 14 different screens of information that are easily navigated through the ever-present menu button. The following topics are covered:

Each screen in iWitness Biblical Archaeology presents artifacts and notebooks that can be tapped to examine in greater detail. For example, on the "David, YHWH, and Israel Inscriptions" page, readers can touch the Tel Dan Inscription to have it pop up in greater detail, and then tap the nearby journal, which opens up to display a description of how it was found. In some cases the journal entries go on for several pages, which can be accessed by repeated taps on the book. Unfortunately, it isn’t always clear which notebooks have further pages, and there is no back button on the pop-up notebooks, which means readers have to tap to the end and then reopen the book to go back and read a previous page. Users will likely want to turn the sound down as well, as the continual digging sounds in the background grow old quickly. Other than these minor caveats, the pop-up artifacts and notebooks are engaging and visually appealing, and the user-experience is excellent.

The information presented in the app is designed to highlight the historical reliability of the Bible. Where there are multiple theories, these are noted. For example, on the "Searching For Noah’s Ark" screen, three possible sites for Noah’s Ark are highlighted: Agri Dagh, Cudi Dagh, and the Durupinar site (although it notes that few scholars take the Durupinar site seriously). Powell seems to favor the Cudi Dagh site in the presentation of his information, as he mentions that Agri Dagh wasn’t called Mt. Ararat until the 13th century (with one possible reference around 500 AD) and claims that Cudi Dagh has more ancient testimonies associated with it. Users will also want to read ABR staffer Rick Lanser’s series of articles advocating Agri Dagh as the landing place of Noah’s ark to make an informed investigation of the issue (https://biblearchaeology.org/research/contemporary-issues/2793-the-landingplace-of-noahs-ark-testimonial-geological-and-historical-considerations-part-one). 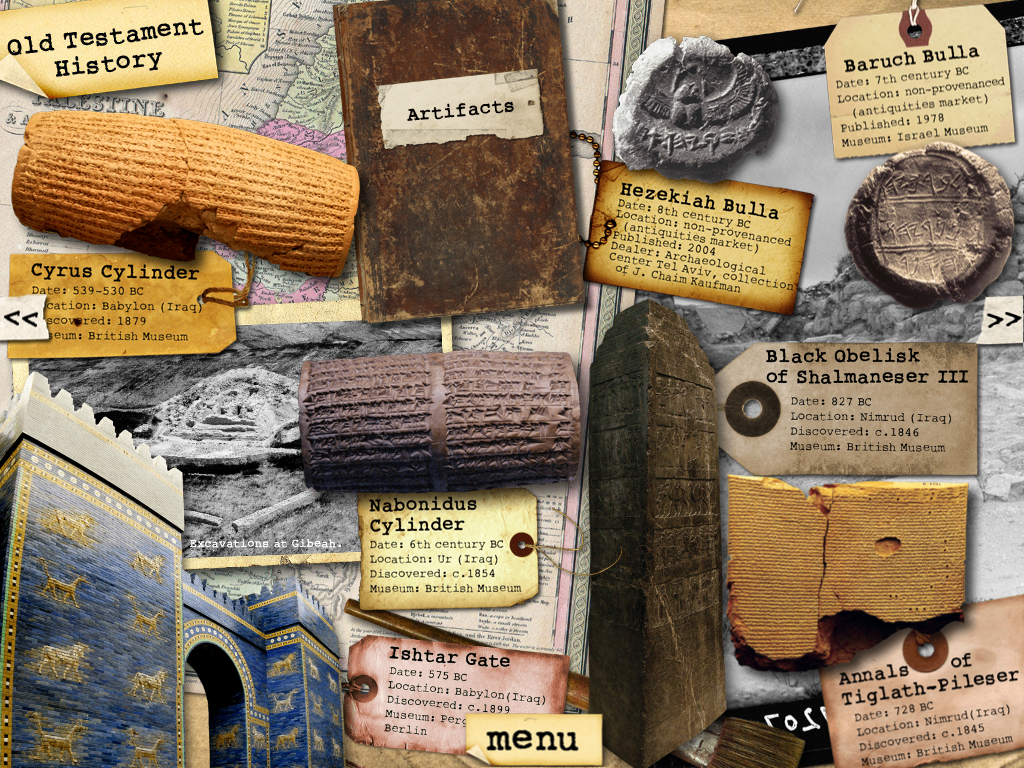 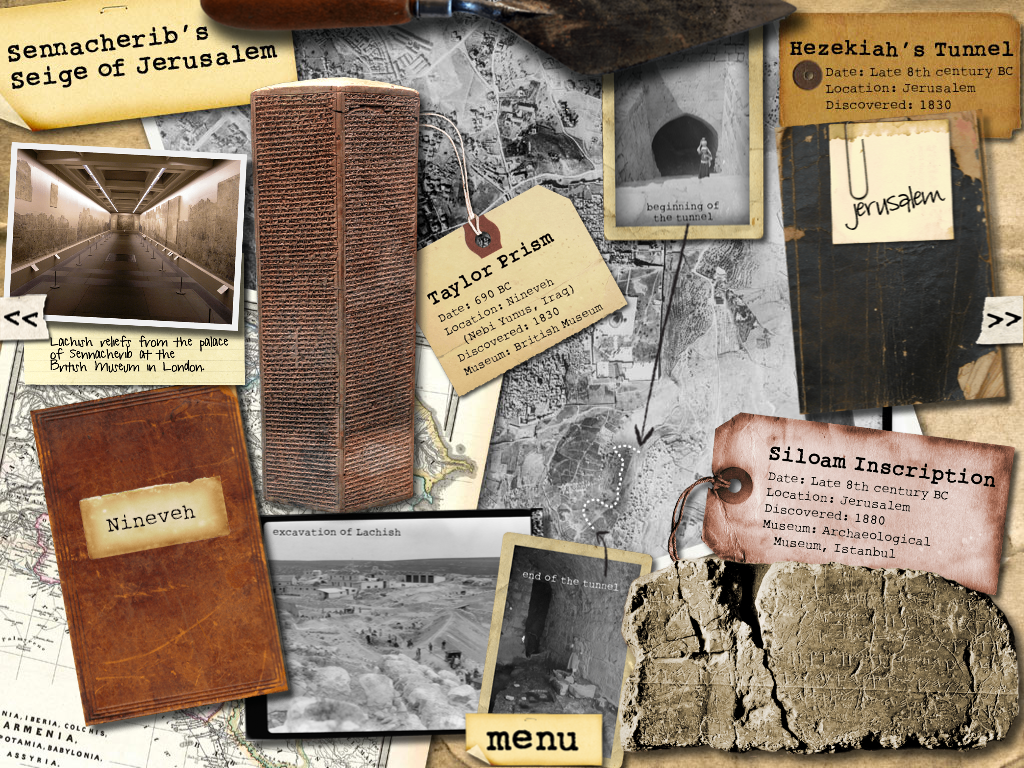 Numerous finds related to the historical reliability are highlighted throughout the app. Old Testament artifacts include the Mesha Stela/Moabite Stone, the Merneptah Stele, the Taylor Prism, the Siloam Inscription, the Cyrus Cylinder, the Black Obelisk of Shalmaneser III, and the Baruch Bullah, among others. New Testament artifacts highlighted include the Erastus Inscription, the Sergius Paulus Inscription, the Gallio Inscription, the Politarch Inscription, etc. In addition, iWitness Biblical Archaeology delves into other issues including Egyptian chronology (in which Powell clearly favors a revised chronology), the Dead Sea Scrolls, and the history of the Shroud of Turin. Users should be aware that revised Egyptian chronology, while promising "harmonization" with the Bible, actually creates more issues than it solves, and is biblically unnecessary (see Dr. Bryant Wood’s article here: https://biblearchaeology.org/research/conquest-of-canaan/3196-david-rohls-revised-egyptian-chronology-a-view-from-palestine). Notably absent is any significant discussion of the Conquest, although in fairness and by necessity, there will always be omissions in a general overview.

Readers looking for in-depth treatments of the topics or artifacts covered in iWitness Biblical Archaeology will be disappointed, but that is not the purpose of the app. It is a good summary (not an exhaustive study) of many topics/artifacts discussed that show how they demonstrate the reliability of the Bible. Indeed, a lot of useful information is packed into a small space. Users can read from start to finish, or explore individual topics they desire. Hopefully those who want more detail will be inspired by the app to engage in further research.

What one gets for $2.99 is an excellent, non-technical introduction to biblical archaeology and many of the major finds that have been made throughout the past 150 years of excavations in the Holy Land. It is an apologetic resource that is both well-designed and informative; one could let an unsaved friend explore it with confidence and without embarrassment. Beyond the fantastic graphics, iWitness Biblical Archaeology brings this field of study into the 21st century and makes it accessible to a wider audience, many of whom spend much of their time on their devices. Doug Powell has created a unique and welcome addition to the field of apologetics, one that fulfills its purpose of being a dynamic, interactive app which demonstrates the historical reliability of the Bible.