The third week of our final season ended in a fashion typical of final days at Maqatir over the past few years. Silos, underground networks of tunnels, mosaic floors, and coins from a variety of eras all came to light in the last few days of our dig season. While we still have the winter dig to complete before Maqatir will be in the "history books," Maqatir continued to yield its secrets in our third week.

In Square Q25 during week three, the members of Abigail Levitt's team continued to clarify walls and clear bedrock. They excavated two silos with two openings connecting the two silos. The first silo, while clearly first century in style, produced mainly Late Bronze Age and Iron Age pottery. The second silo produced LH/ER pottery and many coins. Abigail and her workers also excavated a stairwell leading to a tunnel. 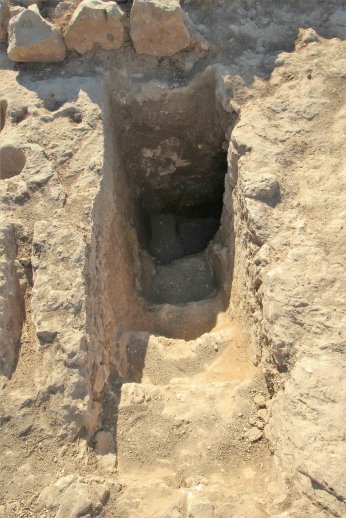 Credit: Michael Luddeni Photo in Abigail's square where digging into the floor revealed a staircase going down into a tunnel. This tunnel goes under the bedrock and comes out the other end where a second staircase was found. 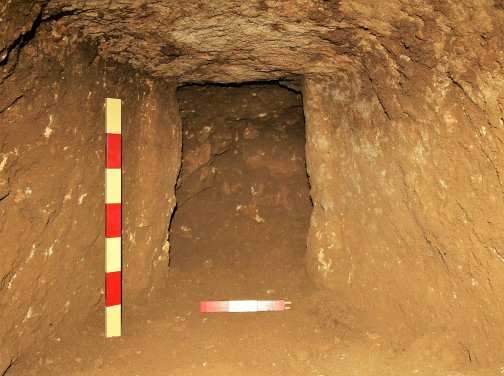 Credit: Michael LuddeniLooking through the tunnel toward a square doorway at other end. 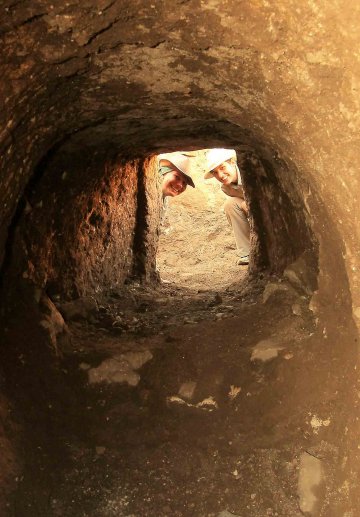 Credit: Michael LuddeniLooking through the open tunnel after clearing the square doorway.

The second flight of stairs also led to a second arched tunnel leading to what appears to be a silo opening to the large structure to the northwest of this square. It seems that the first tunnel was blocked up at some point in time after its construction with a wall at the halfway point. The southern half of the walled-up tunnel and the southern stairway were plastered, but the northern half of the tunnel and the northern stairway were not plastered. The purpose of this tunnel system remains unclear. It is possible that the southern half was repurposed to be used as a mikveh. 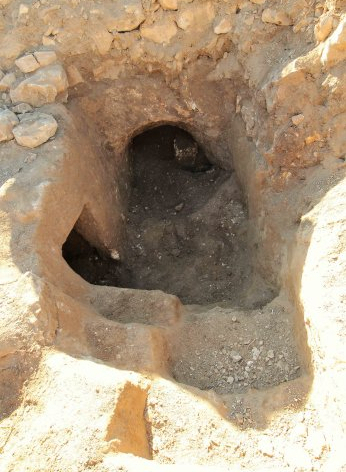 Credit: Michael LuddeniLooking down the second flight of stairs to the junction of two tunnels. 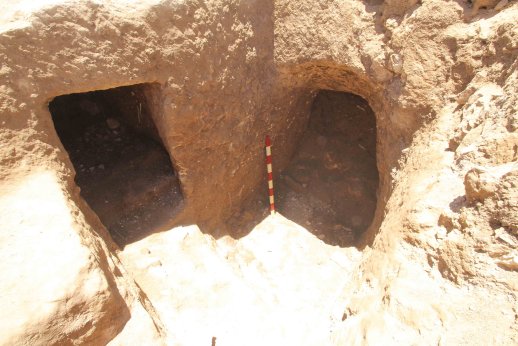 Credit: Michael LuddeniAnother view of the tunnel junction after clearing was completed.

Dr. Bryant Wood and his crew moved into a new area and did some extensive digging in squares AA22 and 23. A possible megalithic tower was discovered in Square AB23 during the first week of the season. The tower continues into Squares AA23 to the north, AA22 west of Square AA23, and AA24 east of Square AA23. The southern wall of the fortress approaches from the west to join the tower in Square AA22. Square AA22 was opened to examine the connection between the southern wall and the tower. The tower occupies the eastern 3.3 ft. (1 m) of the square. The rest of the square was excavated to the top of the wall. The inside (north) face of the wall was determined to be at the northern edge of the square. Although the outside (southern) face of the wall is still unclear, the width can be estimated as ca. 13 ft. (4 m) since it is visible on the surface. The stones of the wall appear to be bonded to those of the tower.

Square AA23 was initially opened at the end of week two to further investigate the megalithic tower. Work continued throughout week three. The tower takes up the entire square, with three enormous megalithic stones in the southern sector. They are 8-10 ft. (2.5-3.0 m) long, 3.3-4.3 ft. (1.0-1.3 m) wide, and 3-4 ft. (0.96-1.20 m) thick. Immediately north of the two westernmost megaliths is a 6.5 x 6.5 ft. (2 x 2 m) area of hard-packed clay between surrounding megaliths that is at least 3.8 ft. (1.16 m) deep. The purpose evidently was to allow movement and cushioning of the stones, perhaps as "shock-proofing" of the tower to minimize earthquake damage. Elements of the tower thus far exposed suggest it was circular in plan and on the order of 33 ft. (10 m) in diameter.

In Suzanne Lattimer's square, the third week started with a mass exodus. She lost her assistant and all but one worker, but with the redistribution of workers from completed squares she was able to gain another assistant and two other workers. The week started slow, with removing large rocks from her cistern and clarifying walls. 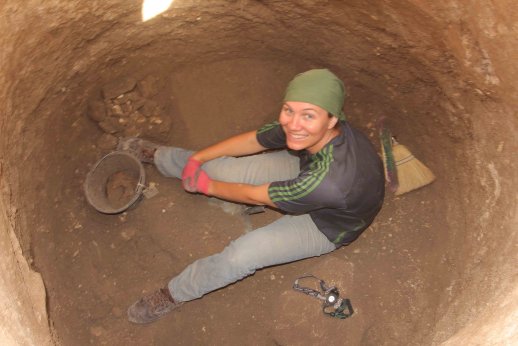 Credit: Michael LuddeniSuzanne Lattimer digging out the dirt from a cistern that she found in her square.

All that changed Wednesday, when she found most of the pieces to a stoneware cup in the cistern. Later, her team hit the bottom of the cistern, which happened to have a completely intact mosaic floor. The floor consisted of red and beige tesserae laid in a random pattern with an approximately 13.8 in. (35 cm) round depression in the center. Due to the thickness of the plaster on the walls, the tile floor in the bottom, and a basin area leading into the cistern, the conclusion was reached that perhaps this was a wine vat. The center depression would have been used to help clean the vat before pressing by being able to collect all the dirt in the vat after a good sweeping. After removing the wine, the depression would collect the last bits of wine. In regard to this, Suzanne commented, "I know it works exceptionally well both ways, as I used it cleaning out the remains of dirt from the floor and scrubbing the floor clean." Once the square was closed out, Suzanne and her team were redistributed to other needy squares.

Credit: Michael LuddeniThe bottom of Suzanne's cistern revealed a floor of mosaic tile. Though the photo and light reflection make it look dome-like, it is actually circular and flat.

Dr. Boyd Seevers completed his work on the Iron Age homes and moved to do some clarifying of the Roman-era tower complex. After a day or so of work there, he moved to square R24 to assist Dr. Brian Peterson, thus allowing him to do some final work on P22. Steve Rudd was likewise reassigned to Dr. Wood's squares as he helped finish out the work on a possible MB III/LB I tower complex.

Finally, the Lee University team headed home at the end of week two, with the exceptions of the assistant square supervisor, Ruth Vanderford, and Dr. Peterson. We finally brought P22 to a close, but not before it revealed a few more of its secrets. P22 was indeed the square that kept on giving until the very last day of the dig. On the last two days, a section of the Roman-era wall in P22 was removed to reveal a clear line of the MB III/LB I wall. Coins found during the dissembling of the wall will help us date the wall construction. The MB III/LB I wall extends for roughly 23 ft. (7 m) in an east-west trajectory. This is one of the longest and most well-preserved sections of MB III/LB I walls on the site. On Tuesday the team also opened square R24, which is associated with the large public building to the north of P22. They excavated a street from the Early Roman Period and also found a silo in the main building. Nothing of great significance was found in R24, although there was not time to finish the silo excavation or the eastern portion of the square in one area.

Credit: Michael LuddeniA digger digging in a cistern and coming out with the collar rim of a large collar rim jar.

Despite the Muslim holiday of Ramadan, we were able to have pizza at least once this week, even though it was from a different vendor. Also, the weather was pleasant, with only one day reaching into the 90s. All in all, we had a great season and a successful third week. We look forward to Shiloh in the coming year!