Who's Who in Biblical Archaeology: James Breasted

What do you mean, “armchair archaeologist”?! A seasoned digger may want to reject the notion as self-contradictory. But if anyone has earned the right to be so named, James Henry Breasted, with his many books and honors in the field of ancient history, is he. The title “archaeologist” accompanies his name in the biography by his son, Charles Breasted (1943), and in W.F. Albright’s “James Henry Breasted: In Memoriam” in the Bulletin of the American Schools of Oriental Research 61 (February 1936). Though not himself an excavator, Breasted explored ancient ruins, especially in Egypt, and was responsible for a notable series of archaeological expeditions. As founder of the Oriental Institute at the University of Chicago in 1919, with money from John D. Rockefeller, Jr., he was at least indirectly involved in twenty-some digs in the Near East and the issuance of more than 125 scholarly publications over the succeeding 40 years.

Familiarity with the name of this consummate historian may go back, as it does for me, to reference use of his high school/college textbook, Ancient Times, first published in 1916 and revised and enlarged just a year prior to his death. Earlier, in 1906, Breasted had published a five-volume work, Ancient Records of Egypt. Even that was preceded by his definitive History of Egypt.

James Breasted was not without recognition from his peers. He was elected president of such learned societies as the American Oriental Society (1918), the History of Science Society (1926), and the American Historical Association (1928). Not only as a translator and historian in his own right, but as a major promoter of ancient oriental research by others, he did more than any scholar of his time to inform Americans and the English-speaking world in general of a valuable cultural heritage from those “ancient times” of which he wrote. It was he, for example, who coined and popularized the term “Fertile Crescent” for the arable belt which arches from the Persian Gulf to the Red Sea, and on down the Egyptian Nile valley. 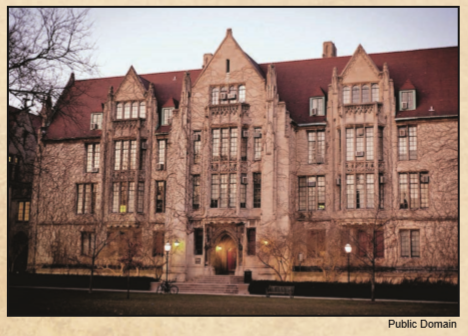 The Oriental Institute at the University of Chicago was founded by Dr. Breasted. He pioneered American Egyptology with his survey of Egypt and Nubia in 1895–96. The Institute is a leading research center for the ancient Middle East. The museum houses some 350,000 artifacts—around 5,000 of which are on display.

Born of Anglo-Dutch stock in northern Illinois, Breasted, destined to become “America’s greatest Orientalist and the greatest organizer of archaeological research whom the world has yet known” (says Albright, in the BASOR tribute mentioned above), studied for the ministry at Chicago Theological Seminary. A special interest in Hebrew and Semitics developed there, which led him to major under William R. Harper in graduate study at Yale. His doctorate in Egyptology was completed in Berlin, under the famous Erman. His thesis was written in Latin, on Akhenaton’s Hymn to the Sun.

From receipt of his PhD degree in 1894 till his death in 1935, his life’s work was centered at the University of Chicago, where he rose to the rank of Distinguished Service Professor and Director of the Oriental Institute. He became the first American in his field to be acknowledged by leading scholars in Europe to be their equal. So accurate and thorough was his first major publication, History of Egypt, that it became a standard and soon appeared in German, French, Russian and Arabic translations.

After founding the productive Oriental Institute at the University of Chicago in 1919, the pace of Breasted’s personal scholarly career was slowed. Yet he continued to do some survey writing, such as The Dawn of Conscience (1933). His lucid literary style, combined with his originality and broad perspective, gave all his books a wide circulation, despite their rather specialized subject matter. 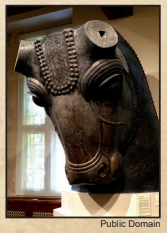 Colossal Bull Head: Once part of a statue guarding an entrance to the Hall of 100 Columns at the Persepolis Palace. It is now on display at the Oriental Institute Museum. The Museum houses an extensive collection of artifacts related to ancient civilizations. These include ivories from Megiddo, Early Bronze Age tools, weapons, ornaments and sculptures and thousands of artifacts from the Nile Valley. The first significant group of artifacts were purchased by Breasted while on his honeymoon in Egypt in 1894.

Under Breasted’s energetic management, the Oriental Institute conducted successful excavations in Egypt (Luxor, Thebes, Memphis, etc.), in Iran (Persepolis, where artwork, architecture, and 30,000 inscribed tablets were unearthed) and Iraq, northern Syria and, far from least, the ten-year exploration of Megiddo. Considering the esoteric nature of his field, it is gratifying that this Orientalist—linguist, historian and literary genius that he was— received not only numerous academic honors in American, British and European societies and academies, but also a membership in the National Academy of Sciences. 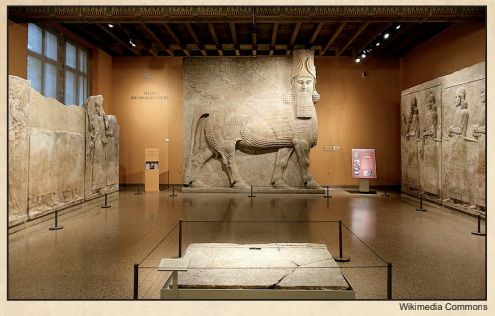 The Yelda Khorsabad Court recreates part of the interior of a palace courtyard of king Sargon II of Assyria (ca. 721–705 BC), dominated by the most spectacular object in the Mesopotamian collection — the 16-foot tall, 40-ton, human-headed winged bull (lamassu). The lamussu and the adjacent reliefs, which include images of king Sargon and his son, and later king, Sennacherib, were excavated by the Oriental Institute between 1928–1935 at Sargon’s capital city Dur-Sharrukin - modern Khorsabad.

Aerial view of the ruins of Persepolis, Iran, the ceremonial capital of the Achaemenid, or First Persian, Empire.

This article was originally published in Fall 2019 issue of Bible and Spade mazagine.
Click here if you interested in purchasing a subscription to Bible and Spade; our quarterly publication, focusing on biblical archaeology and apologetics.
Back issues of the magazine can be purchased on the ABR online bookstore.