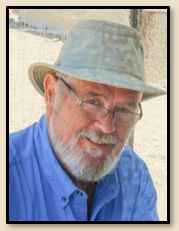 Dr. Leen Ritmeyer is an architect and even casual followers of Biblical Archaeology have probably heard of Leen Ritmeyer. Leen has served as conservator or architect at dozens of excavations in Israel “from Dan to Beersheva,” including sites as prominent as Arad, Bet Shean, Ashdod, and Banias. Leen’s most important contribution, and that which brought him worldwide acclaim, was in Jerusalem where he worked with renowned archaeologists Benjamin Mazar (Temple Mount) and Naaman Avigad (Jewish Quarter). Other Jerusalem projects included the Byzantine Cardo and the Herodian/Roman villas. While responsible for numerous publications, his opus magnum was The Quest (2006). This comprehensive history of the Temple Mount has become standard required reading for all archaeologists and archaeological students. In 1983, Leen and his wife Kathleen founded Ritmeyer Architectural Design, an archaeological architecture firm providing expertise on numerous and varied projects. Leen currently serves on the editorial board of Biblical Archaeology Review and on the archaeology faculty of the Cardiff University; he has provided all of the excellent architectural renderings for Khirbet el-Maqatir, and will do the same at Shiloh.