Home » The Shroud of Turin » Home

ABR Researches Jerusalem Tombs for the Shroud of Turin Project

Since AD 1390, the Shroud of Turin has evoked great veneration and great mystery. The blood stain patterns on the Shroud appear to represent the image of a crucifixion victim from antiquity. Numerous reports of the existence of the burial shroud of Jesus of Nazareth exist prior to AD 1390, but attempts to tie the Turin Shroud to these reports have yielded mixed results. If the Shroud proves to be authentic, it represents a direct witness to the death, burial, and resurrection of the founder of Christianity, the world's largest religion. Many questions persist regarding the age and provenance of the burial garment. Scientific advancement has resulted in the ability to perform unbiased tests to gain more information about the Shroud and to possibly answer these questions. Notably, in 1988 researchers performed C-14 analysis on Shroud fibers from the garment's periphery. Unfortunately, the samples came from only one site on the cloth, were not blind-tested, yielded dates among the three participating labs so dissimilar that they could not pass a chi-square test, and initially contained threads obviously not part of the original cloth. There is now significant research suggesting the sample area contained a later 16th-century patch, perhaps to repair damage from the fire of 1532.

The Association of Scientists and Scholars International for the Shroud of Turin (ASSIST) recently launched a new initiative to determine if limestone particles found on the Shroud originated from a Jerusalem tomb or if the limestone came from another locale. This initiative supplements a similar test performed in the 1980's by optical crystallographer Joseph Kohlbeck, which indicated that there were indeed particles of Jerusalem limestone on the Shroud. If the limestone and pollen particles originated from Jerusalem, the possibility that the Shroud did once envelope the crucified body of Jesus of Nazareth would be significantly enhanced. ASSIST team member Paul Maloney contacted Dr. Bryant Wood, ABR Director of Research, for help in obtaining samples from a tomb complex beneath École Biblique, beside the famous Garden Tomb in east Jerusalem. With detailed collection protocols from ASSIST, Dr. Wood, Dr. Scott Stripling, Abigail Leavitt, and Kent Wegner, all in Jerusalem for the final excavation at Khirbet el-Maqatir in December 2016 and January 2017, went to work. 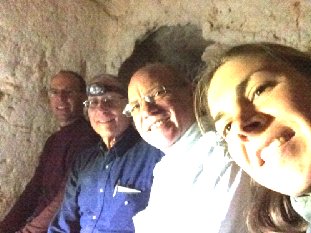 The team first assessed the situation in order to learn as much as possible. A visit to the tomb and some research of publications yielded fascinating information. The tombs, located less than one kilometer from the original location of the Church of the Holy Sepulchre where Jesus was likely crucified and buried, functioned as part of an 8th-7th century BC necropolis, and included the most elaborate tombs ever found in the Jerusalem region from Iron Age II. The tomb complex consists of an entrance chamber and six side chambers. Five of the side chambers survive in their original condition. Later renovations in the sixth chamber and outside the entrance chamber have resulted in a small chapel and a burial area that remains in use today. Notably, Fathers Louis-Hugues Vincent, Roland De Vaux and Jerome Murphy O'Conner, accomplished Dominican archaeologists, repose here. Within the five intact side chambers, benches along the sides and backs of the chambers provide a burial platform for the original interment of the deceased. Beneath the benches, repositories provide a final resting place for the bones of deceased ancestors. 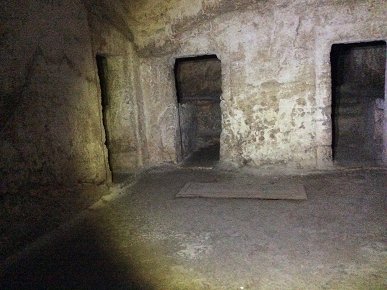 Although the team spent most of its time working at the Khirbet el-Maqatir excavations, rainy days provided the opportunity to complete the tomb-sampling project. Acid-free sticky tape was used to lift limestone samples from the walls, benches and floors of all the tomb chambers. Each spot sampled was photographed so that the exact location of the sample would be recorded. Each team member performed an important task. Dr. Wood took detailed notes, and carefully placed each sample in its proper place on a sheet of plastic. Dr. Stripling lifted the samples from the specified locations. Miss Leavitt photographed each sample as it was taken, and Mr. Wegner created the best possible lighting within the darkness of the tombs. Unfortunately, the acid-free tape ran out before the final tomb was processed. This temporarily brought the project to a halt. A search began for more tape, quickly bringing to light an extreme (absolute!) shortage of acid-free tape in the entire country of Israel. Even the ever-helpful staff at the team's headquarters, the Jerusalem Ritz Hotel, was not able to procure such a product. The Albright Institute and the Israel Museum also proved to be dead ends. Desperate pleas were sent out to friends traveling to Israel, and finally, a week later, a roll of acid-free tape arrived via a kind Canadian, Dr. David Graves of Liberty University, part of the team that made the important discovery of a new Dead Sea Scroll cave. Another rainy day provided the opportunity to finish the project at the École Biblique tombs. 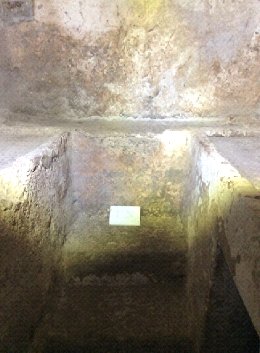 In the days following Dr. Wood's return to the US, he compiled his notes into a comprehensive report which he sent immediately to Paul Maloney along with the samples. ASSIST then began the long process of preparing a proposal for the testing the samples, carrying out the tests, writing peer-reviewed articles, and engaging in academic debate. The limestone samples taken from the École Biblique tombs by the ABR team in December 2016 and January 2017 may help to provide a final answer as to whether or not the Shroud once laid in a Jerusalem tomb. This, in turn, may determine if the Shroud once wrapped the tortured corpse of a crucifixion victim in Jerusalem. If this fact were established, a strong argument could be posited that the image on the Shroud depicts the tortured body of Jesus of Nazareth in the spring of AD 33.