As all who are familiar with the Biblical account will remember, Joseph, while still in the household of Potiphar, was falsely accused of adultery with the wife of his master and thrown into prison. The normal punishment for adultery in ancient Egypt was death; the fact that Joseph did not suffer execution is interesting and perhaps indicates that Potiphar doubted the veracity of his wife, who had made the accusation. In any case, Joseph spent time in an Egyptian prison.

The Biblical mention of Joseph serving time in a prison is noteworthy in itself. To us in the 20th century, serving time in a prison as punishment for a crime seems quite natural. But in the ancient world, this was not the case. The death penalty, a fine, or even bodily mutilation were the usual means of making people suffer for their crimes in the ancient Near East.

Prisons were rare in the ancient world. To see this, one need only look at the Old Testament Law. There is nothing there about serving a prison sentence for any sin or crime, and in fact there is nothing Biblically or archaeologically that would lead us to believe that the Hebrews even had prisons as we know them. The importance, then, of the prison sentence of Joseph is that the author of the book of Genesis is recording correct information, for Egypt was one of the few nations in the ancient Near East that had prisons in the classical sense of the term.

We are very fortunate to have an Egyptian papyrus, translated and published by the Egyptologist W. C. Hayes, that deals at length with Egyptian prisons (Hayes 1972). We have mentioned it also deals with Asiatic slaves in Middle Kingdom Egypt. Let us look at what this papyrus tells us about prisons and prison life in Egypt in the days of Joseph (Hayes 1972:37-42). 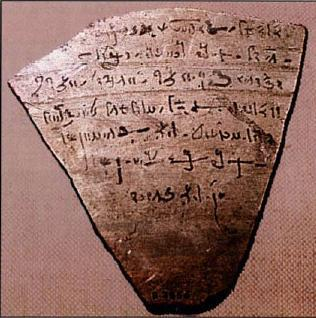 Ostracon (pottery sherd with writing) from the Chief Baker of the Temple of Amun at Thebes acknowledging the receipt of wheat.
- ABR File PhotoThe main prison of Egypt was called the 'Place of Confinement.' It was divided into two parts: a 'cell-block' like a modern prison, and 'a barracks' for holding a large number of prisoners who were forced into serving as laborers for the government. What kinds of sentences were given to

prisoners? We know little about specific sentencing procedures. It does not seem that criminals were given a number of years to serve in prison. Perhaps all sentences were life sentences. In any case, some of the prisoners in the Place of Confinement were 'serving time' for their crimes, as Joseph presumably was. Other prisoners, however, were simply being held in prison awaiting the decision of the government as to what their punishment was to be. In other words, they were waiting to find out if they were going to be executed. This last category seems to be that of the two individuals Joseph met while in prison, the Butler and the Baker.

Who were the two individuals? We are never told their names or their crimes. The fact that one of them, the Baker, was eventually executed, and the other, the Butler, was restored to office, leads us to believe that they were accused of being involved in some kind of plot against the king. Such things happened in ancient Egypt. In such a case, once the king sorted out the facts, the guilty would be punished and the innocent would be exonerated. The Baker was executed (for treason) and the Butler was restored to his position. But what was that position? 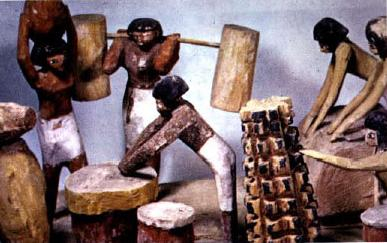 Tomb model of an ancient Egyptian bakery, Cairo Museum
- ABR File PhotoWe get the term 'butler' from the KJV translation of the Bible, and it brings to our minds the very British concept of a man in a tuxedo who answers doorbells and supervises household servants. This does not reflect the situation in the Joseph story. The Hebrew title is 'Cup Bearer' (for a Middle Kingdom example, see Vergote 1959:50). The duties of this personage involved providing beverages to the king; hence we see the importance of having someone trustworthy on the job.

Getting back to the prison itself, let us see what else the Hayes papyrus tells us about it. The main prison was located at Thebes (modern Luxor) in Upper Egypt, some 400 mi south of the Nile delta and modern Cairo. Assuming Joseph was there and not at some smaller prison (a correct assumption I believe since key royal officials were imprisoned there too), we see that the entire Joseph story cannot be confined to the delta area
of the Nile as some scholars would have us believe.

As the Genesis account states, there was a 'Warden' or 'Overseer of the Prison,' who was assisted by a large staff of clerks and scribes. Record keeping at such an institution was as important to the ancient Egyptians as it is in a modem prison. The actual title Overseer of the Prison is not commonly found in Egyptian inscriptions, but examples do exist from the Middle Kingdom, the time of Joseph.

One of the chief assistants to the Warden or Overseer was the 'Scribe of the Prison.' In Genesis 39:22 we are told that Joseph was promoted to high office in the prison. Since Joseph was literate, as we have seen from the fact that he served as steward in the household of Potiphar, it seems probable that he was promoted to Scribe of the Prison. As such, he would not only have been the right-hand man of the Warden, but he also would have been in charge of all the records of the institution. 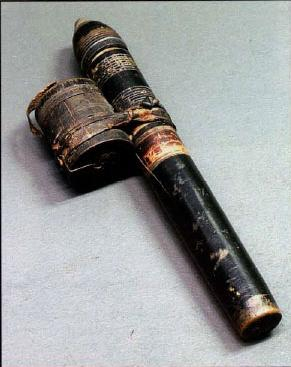 Scribe's pen and ink set, Egyptian Museum, Berlin. Joseph would have used a set such as this in his duties as steward and prison official.
- Michael Luddeni

No matter how high in rank he became, Joseph naturally would have valued his personal freedom more than a high office in the prison.

When he interpreted the dream of the Cup Bearer as meaning that the Cup Bearer would be freed and restored to his post, Joseph implored that individual to remember him when he has the ear of Pharaoh. The Cup Bearer promises to do so, but quickly forgets Joseph when he assumes his old position again. It is only when Pharaoh himself dreams a dream that the Cup Bearer remembers the young Hebrew who could, through the power of God, interpret dreams. At that time, Joseph is called out of prison.

One final point needs to be noted. Joseph, before going to the king, has to change his clothing and shave (Gn 41:14). These are significant details. Native Egyptians were very concerned about personal cleanliness and the removal of all facial hair-the beards worn by kings were false beards. If Joseph appeared before a Hyksos, i.e. non-Egyptian Pharaoh, these factors would not have been so significant. It is likely that the ancient Hyksos were Amorites, and we have ancient pieces of art indicating that the Amorites grew beards. This verse, therefore, is further evidence that the Pharaoh of Joseph's day was
Egyptian and not Hyksos, and that Joseph is correctly dated to the
Middle Kingdom period.

In our next article, we will examine Joseph's encounter with Pharaoh, a real turning point in the career of the Biblical Patriarch.