The infuriated residents of the town of Ophrah sought to kill Gideon the morning after he had spent the night destroying the town’s Asherah and altar of Baal. Gideon’s father confronted them and mocked them saying, “If he is a god, let Baal contend for himself”. This taunt became the source for the alternate name for Gideon as stated in Judges 6:32, “Therefore, on that day he was called Jerubbaal, (Yerubbaal—ירבעל) that is to say, ‘Let Baal contend against him’ because he (Gideon) pulled down his (Baal’s) altar.”1

In July 2021, the Israel Antiquities Authority (IAA) announced the discovery of an ostracon (a piece of broken pottery with writing on it) in a stone-lined food silo at Khirbet el-Rai, an archaeological site located about 2½ miles from the site of the ancient city of Lachish. This artifact, which came from a small jar that once held about a pint of perfume or medicinal oil, was dated to around 1100 BC (Late Bronze Age, the period of the Judges) using pottery typology, stratigraphy as well as radiocarbon dating of the organic material found in the stratum in which it was found.2   This ostracon had just one word on it written in “proto-Canaanite” script, the name Yerubbaal (ירבעל). 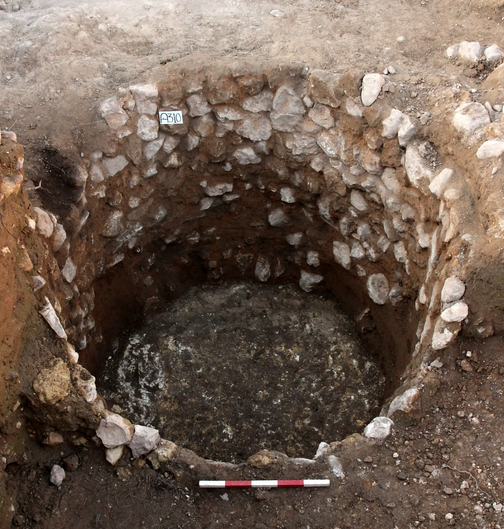 The leaders of the excavation, Yossi Garfinkel of Hebrew University, Saar Ganor of the Israel Antiquities Authority, and Kyle Keimer and Gil Davis of Macquarie University in Sydney, Australia, postulate that the sherd might possibly be connected to Gideon, making it the first piece evidence to document a biblical judge found in the archaeological record. The team continued to dig in the area but was able to find only five pieces of the ostracon in total, which led Garfinkel to speculate that it may have been the result of the vessel having been broken elsewhere and then discarded into a silo as trash.3

The combination of scarce primitive alphabetic writing and the equally rare archaeological evidence from this period led Garfinkel to state that finding a piece of pottery with the name of a biblical judge upon it is “amazing”.4 Originally excavated in 2019, it has taken two years to carefully clean and decipher the ancient script. It was an epigraphy expert from George Washington University, Christopher Rollston, who first discerned the letters yod, resh, bet, ayin, and lamed, spelling YRBA’L (Yerbaal/Jerubbaal), derived from the Hebrew root RV (rav, to quarrel or contend).5 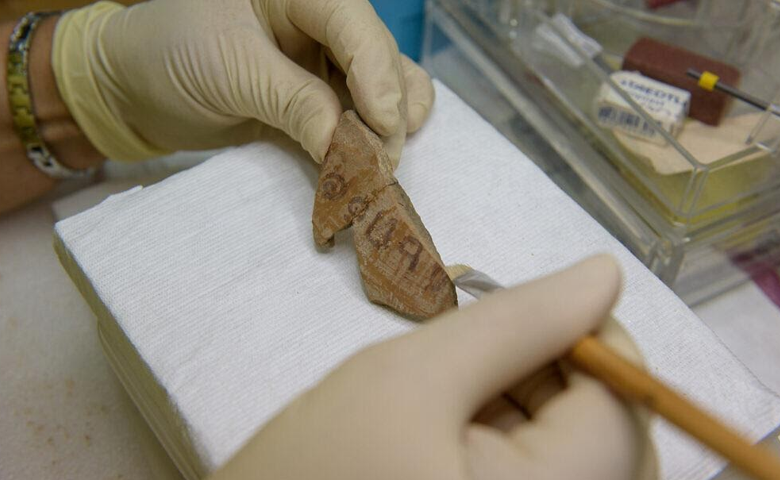 Credit: Dafna Gazit | Israel Antiquities Authority
The ostracon discovered at Khirbet el-Rai is believed to be from a small container of perfume or medicinal oil.

The Hebrew letter yod on the sherd is incomplete, as a portion from the top of the letter (as identified by Rollston) was broken away; complicating matters further, the broken sherd may have had an additional letter or letters before the yod. This has opened the door to theology professor David Vanderhooft of Boston College to challenge that the first letter of the inscription should instead be reconstructed as a zayin, which would render the name as ZRBA’L, or Zerbaal.  Vanderhooft also does not rule out that there could be additional letters missing. If the sequence ZRBA’L was preceded by one or more letters, such as another ayin, it would produce the personal name Ezerbaal, Such a rendering would indicate adoration for Baal rather than opposition, and thus would suggest an affirming Canaanite source. Vanderhooft commented, “I would not suggest (that ZRBA’L) is necessarily correct, but one must entertain all reasonable options.”6

Rollston, however, stands by his reading. “But this is quite speculative, as restorations often are. As for me, I read a yod before the resh, and thus, read Yeruba’l (Jerubbaal), and I don’t need to restore some hypothetical letter. I work heavily in this script, and so I’m very comfortable with the way that we are reading it.”7 “I would hasten to add that this script is well known and nicely attested, so we can read it with precision.”8  Professor Doug Petrovich, from The Bible Seminary in Katy, Texas, is also an expert on ancient Hebrew epigraphy and the alphabetic script of the second millennium BC, and he supports Rollston’s rendering. Garfinkel, too, affirms the original Rollston reading of the first letter as yod. He also notes that names like Ezerbaal or Erbaal did not exist in the century to which the sherd has been dated.9 “The most stable ground is to reconstruct the minimal possible name, which is Jerubbaal.”10

Garfinkel has been exploring the possibility that Khirbet el-Rai could be the site of the ancient Philistine city of Ziklag, the city where David took refuge from King Saul.11 While that is intriguing, it does not put to rest the concern that the sherd was uncovered sixty kilometers (37 miles) from the Jezreel Valley where Gideon famously won his battle against the Midianites and Amalekites. There is no mention in the Bible that Gideon was ever near Lachish.12 A petrographic analysis on the sherd revealed that the jug was locally made and did not come from the Jezreel Valley.13 Having tried to close the door on the dispute about the name on the ostracon, Garfinkel leaves the door open to the possibility that there could have been another person named Jerubbaal.14 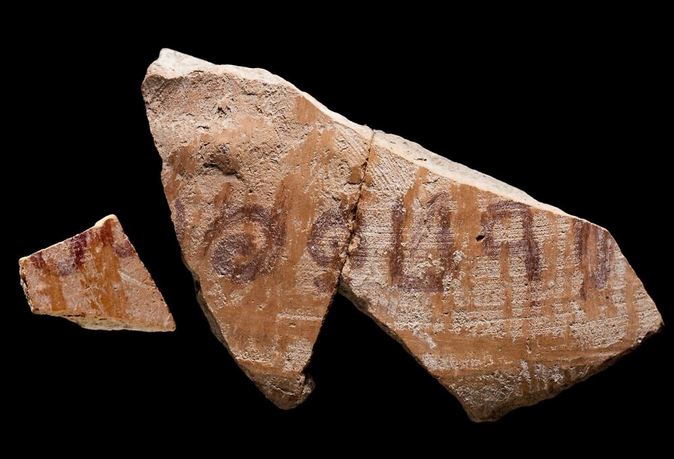 Credit: Dafna Gazit | Israel Antiquities Authority
Written in ink, the ancient alphabetic writing upon the sherd has been interpreted as 'Jerubbaal’. Note that the sherd is broken at the upper right corner (through the top of the first letter) and to the right of the first letter. This has opened the door to speculation that the name could be interpreted differently.

Is the alphabetic script Canaanite or Hebrew?

Garfinkel believes that the development of the alphabet is one of the most important human achievements of any kind because, unlike the complexities of hieroglyphics and cuneiform, alphabetic script made reading and writing more accessible for a wider portion of the population.15 While scholars attribute the earliest development of alphabetic script to the Canaanites, what was the process whereby the Hebrews developed an alphabetic script as well?

Alphabetical writing was widely used by the Canaanite culture in this area during the Late Bronze Age and Lachish is the first place where primitive alphabetical writing has been found -- and it is only four kilometers (2,5 miles) from Khirbet el-Rai. Garfinkel speculates that the knowledge and usage of alphabetical script moved from Lachish to this site and from there it was widely adopted and adapted by the surrounding peoples at such locations as Aram, Moab, and Ammon, and by the Hebrew people as well.16 Garfinkel is hoping that a broader takeaway from this discovery would be to help determine the textual bridge that would connect Canaanite script and Hebrew script.17 (Those interested in current research are encouraged to read Dr. Doug Petrovich’s book, The World’s Oldest Alphabet: Hebrew as the Language of the Proto-Consonantal Script when it becomes available, for a full treatment on this important subject). 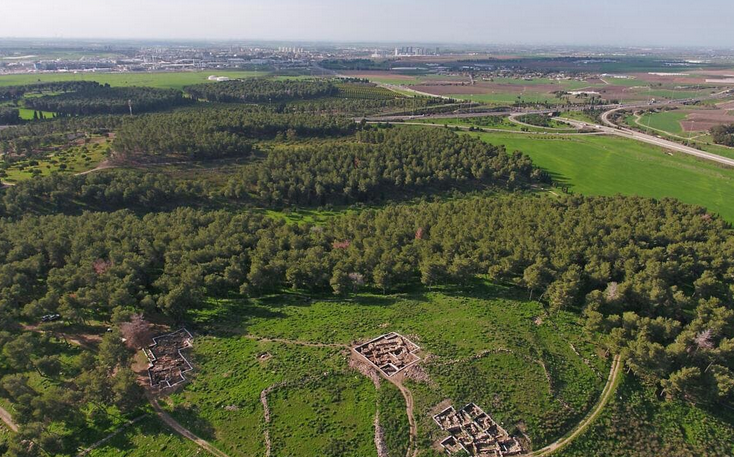 Credit: Emil Aladjem | Israel Antiquities Authority
Aerial view of the excavation at Khirbet el-Rai, near Lachish in central Israel. With a view to the west, the coastal plain in the background was historically the territory of the Philistines.