The specific Egyptian titles granted to Joseph by Pharaoh have been discussed at great length by modern scholars. The key verse is Genesis 45:8, which mentions three titles held by Joseph. The Hebrew text of course does not give the Egyptian form of these three titles. Hence, years of scholarly debate have arisen over the exact Egyptian renditions of the Hebrew words or phrases.

Of the three titles that Joseph held, let us begin with the one obvious title, and then move on to the two more complex and problematical titles.

Genesis 45:8 states that Joseph was made Lord of all of Pharaoh's House. This title has an exact Egyptian counterpart, which is normally translated into English as 'Chief Steward of the King.'

The main job of the Chief Steward was the detailed supervision of the King's personal agricultural estates, the number of which would have been vast. This fits well with Joseph's advice regarding the coming years of plenty and the following years of famine. As Chief Steward, Joseph would be well placed to prepare for the coming famine during the years of more abundant production.

It is interesting to observe that another specific responsibility of the Chief Steward was to take charge of the royal granaries, where the agricultural wealth of the nation was stored. As the person in charge of these great storehouses, Joseph was ideally placed for carrying out his suggestion to store food during the good years for the bad.

On the practical side, two things can be learned from Joseph's post as Chief Steward.

First, note how God had prepared him for his task. No one starts out in life at the top of the ladder. We all must learn the ropes, so to speak, from the ground floor up. Joseph had been steward of the estates of Potiphar. This job was very much like that of Chief Steward of the King, but on a much smaller scale. Joseph without doubt received on-the-job training as Potiphar's steward, which stood him in good stead when he later was promoted to the same job in the King's household.

As Potiphar's steward, Joseph did his job faithfully. We are told that all that Potiphar owned prospered under the stewardship of Joseph. Joseph evidently learned well. He was therefore ready when the Lord allowed him to become Chief Steward for all of Egypt. 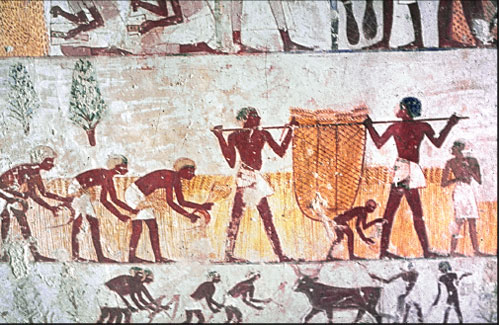 'During the seven years of abundance the land produced plentifully' (Gn 41:47). Egyptian workers harvesting grain and carrying it away to be threshed. Tomb of Mena, Thebes, ca. 1420 B.C.
- ABR File photo.

A second point is also worth mentioning. As Chief Steward of the King, Joseph was perfectly placed to care for God's Chosen People during the famine. As Genesis 45:7 tells us, God put Joseph into this position in order to save the Patriarchal family. It is almost certain that Joseph did not know this at the time of his appointment, but God had plans for him. And, in the same way, wherever God places us, He may have a major task for us to do later. Like Joseph, we should do the best we can at whatever task He gives us, so that we will be ready when called upon later. 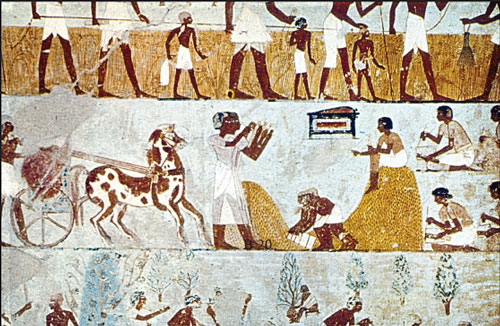 'Joseph collected all the food produced in those seven years of abundance in Egypt and stored it in the cities' (Gn 41:48). After the grain was winnowed, it was collected, and then tallied by scribes. Tomb of Mena, Thebes, ca. 1420 B.C. - ABR File photo.

Genesis 45:8 also calls Joseph 'Father to Pharaoh.' Of course, this does not mean that Joseph was the physical father of the King of Egypt. There was no blood connection between the two men. Pharaoh was an Egyptian; Joseph was a Hebrew. Even if we assume, as many scholars do, that the Pharaoh in the Joseph story was a Hyksos king, there is no reason to suspect any blood relation between the two men. Dismissing that possibility, what then does the phrase 'Father of Pharaoh' mean?

Father of Pharaoh, or more literally 'father of the God' (the Egyptians believed their kings to be divine), had a variety of meanings in ancient Egypt. One was as a term for the tutor of the King during the ruler's childhood. In Joseph's case this is not likely. He had never met the King until called out of prison to interpret the royal dream. Nor does the Bible ever suggest that Joseph held such a post.

Another way the title was used was as a designation for an individual whose daughter became a wife of the reigning king. In other words, 'Father of the God' meant 'father-in-law.' Again, we may dismiss this meaning for Joseph's title. The Bible says nothing about Joseph having any daughters, let alone daughters who married the King of Egypt.

Yet another usage of the title was as a designation for minor priests in Egypt's complex state religion. Again, this does not seem even a remote possibility for Joseph. He was never a priest in ancient Egypt, and as a servant of the true God, he would not ever want to hold such an office.

A last use of the title 'Father of the God,' however, makes more sense for Joseph. The Egyptians used this title as a special honor given to officials who had served long and well, or who had done the King some special favor. Joseph would easily qualify for the title Father of the God when used in this way; in fact, this is the only usage that makes sense. Joseph would have been named Father of the God for interpreting the dream of the King, and for suggesting a plan for Egypt to get through seven terrible years of famine. 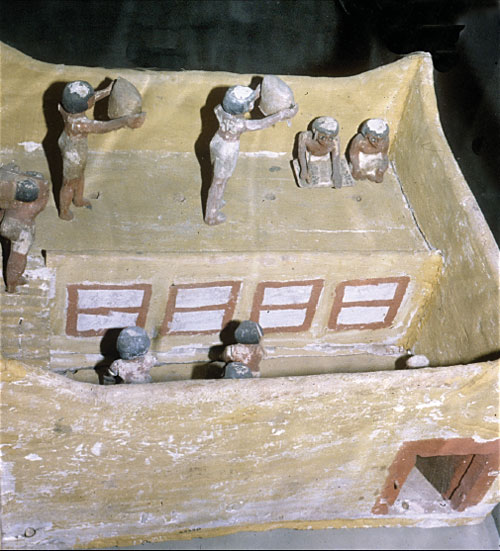 'Joseph stored up huge quantities of grain, like the sand of the sea; it was so much that he stopped keeping records because it was beyond measure' (Gn 41:49). The grain was stored in granaries such as depicted in this tomb model from the Middle Kingdom, the time Joseph was in Egypt. Workers fill the granary from the top while a scribe records the amount. Grain was removed at the bottom by means of a sliding door.
- Egyptian Museum, Cairo. Bryant G. Wood.Ruler Throughout all the Land of Egypt

Joseph's third possible title is more controversial, and merits a more extended treatment. The basic question is whether Joseph ever became Vizier, or Prime Minister, of Egypt.

Genesis 45:8, by calling Joseph 'Ruler of all Egypt,' seems to suggest that he became the Vizier of Egypt. And, when Pharaoh promoted and rewarded Joseph, he said that only as King would he be greater than Joseph. But the modern scholar William Ward has argued that Joseph never became Vizier (Ward 1960:144-50). Ward states that Hebrew phrases such as those mentioned above are not specific equivalents of the Egyptian title of Vizier, but are rather only renditions of vague Egyptian epithets given to other, lesser, officials.

However, Joseph obviously held only one of the vague epithets discussed by Ward and that epithet was 'Chief of the Entire Land.' While Ward is correct in stating that this epithet was at times used for officials of lower rank, it was most commonly used for Viziers. And, for the phrase in Genesis 41:40, 'Only with respect to the throne will I be greater than you,' no exact Egyptian parallel exists. The Hebrew text strongly suggests that Joseph became the Vizier of Egypt.

Assuming that Joseph was indeed Vizier, what were his duties?

There are Egyptian inscriptions that describe the duties of the Vizier of Egypt. Although such inscriptions are much later than Joseph's time (they date from the New Kingdom), several texts exist which describe in great
detail the duties and powers of the office of Vizier.

The Vizier was the chief record keeper of the government records, was the supervisor of the government in general, appointed lower officials of government to office, controlled access to the person of the Pharaoh, and generally supervised construction work and industry in Egypt's state-run economy (Aling 1984:49). More pertinent to Joseph, the Vizier also was in charge of agricultural production, just what he needed to care for God's people in the time of famine.

Also, another power held by the Vizier has great interest in regard to the Joseph story. Only the Vizier welcomed foreign embassies coming into Egypt. So, when Joseph's brothers came to Egypt for food, they would normally meet with the Vizier. And, Joseph is the man they met (Gn 42).

The positions of Vizier and Chief Steward of the King were both very high posts in the government of Ancient Egypt, even as far back as the Middle Kingdom. It is reasonable to ask if there are any known officials with these titles that could have been Joseph. The answer is no, at least at the present time. One problem is that we know comparatively few Viziers and Chief Stewards from the Middle Kingdom. Also, another major obstacle is that we do not know the Egyptian form of Joseph's name, only the Hebrew.

There is, however, one fact of interest that we know about Middle Kingdom Viziers. It is rare in the early part of the Middle Kingdom period to find one person holding both the title of Vizier and the title of Chief Steward of the King. But, from the time of Sesostris II of the Middle Kingdom, we do find examples until the end of the 12th Dynasty. It is possible that Joseph broke new ground in this regard, being the first person to hold both positions at the same time.

The Seven Years of Famine

As for the seven years of famine, no contemporary Egyptian record of this famine exists. But from a later time, when Greek kings ruled Egypt after Alexander the Great's conquest of Egypt, there is an Egyptian text which mentions a seven-year famine, but dates it to the reign of King Djoser of the Old Kingdom.

One wonders if this is a garbled memory of the famine in Joseph's day, simply re-dated to the reign of a more famous king. Confirmation of such a theory is nearly impossible, but it is interesting to speculate about. In our next article in this series we will consider some final aspects of the Joseph story.