Home » Research » Search by Chronological Categories » United Monarchy » Is It Time to Throw Away Your Bible? King David and Solomon: Men or Myths? Part Two

For some 800 years, from the time of Jacob until the time of Gideon, Shechem was an important highland urban center controlling the area from Megiddo to Jerusalem. It is no surprise, then, that Gideon's son Abimelech went to the leaders of Shechem to gain support for his failed attempt to become king of the Israelite tribes. Three archaeological discoveries at Shechem relate to the narrative of Judges 9.

This article was first published in the Spring 2005 issue of Bible and Spade.

Massebah, or 'standing stone' in front of the fortress temple at Shechem. This may be the stone that Joshua erected at Shechem (Jos 24:26) and the 'pillar' where Abimelech was made king (Jgs 9:6). 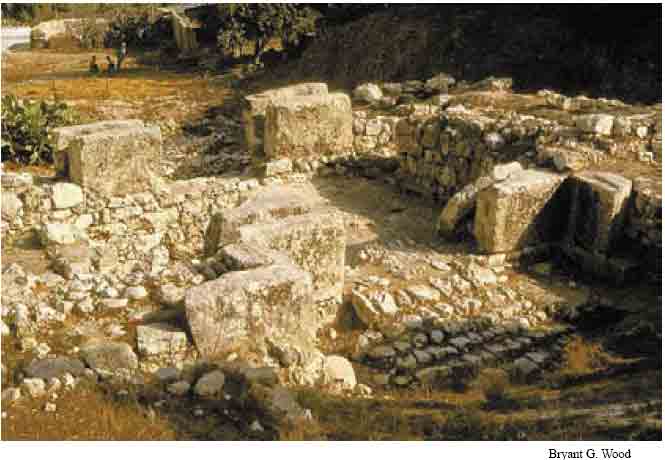 East Gate at Shechem where Zebal and Gaal watched Abimelech's forces advance on the city as dawn was breaking (Jgs 9:345-40). One entered the gate from a cobbled street that ran along the city wall (left side of photo), through the gate and down five steps into the city. 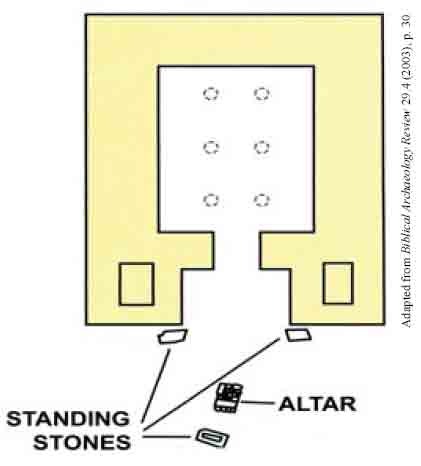 Plan of the fortress temple at Shechem, showing the locations of the altar and standing stones (Hebrew, masseboth) in the courtyard in front.

Campbell, Edward F., Jr.
1983 Judges 9 and Biblical Archaeology. Pp. 263-71 in The Word of the Lord Shall Go Forth: Essays in Honor of David Noel Freedman in Celebration of His Sixtieth Birthday, eds. Carol L. Meyers and Michael O'Connor. Winona Lake IN: Eisenbrauns.
1993 Shechem, Tell Balâtah. Pp. 1345-54 in The New Encyclopedia of Archaeological Excavations in the Holy Land 4, ed. Ephraim Stern. Jerusalem: The Israel Exploration Society Carta.

Stager, Lawrence E.
1999 The Fortress-Temple at Shechem and the 'House of El, Lord of the Covenant.' Pp. 228-49 in Realia Dei: Essays in Archaeology and Biblical Interpretation in Honor of Edward F. Campbell, Jr., at His Retirement, eds. Prescott H. Williams and Theodore Hiebert. Atlanta: Scholars.
2003 The Shechem Temple Where Abimelech Massacred a Thousand. Biblical Archaeology Review 29.4: 26-35, 66, 68-69.

Wood, Bryant G.
1997 The Role of Shechem in the Conquest of Canaan. Pp. 245-56 in To Understand the Scriptures: Essays in Honor of William H. Shea, ed. David Merling. Berrien Springs MI: The Institute of Archaeology/Siegfried H. Horn Archaeological Museum.