June and July were busy months for archaeological discoveries. Perhaps the most significant was a sandstone inscription of the Egyptian king Hophra, one of six pharaohs mentioned by name in the Old Testament (Jeremiah 44:30). It was accidently discovered on June 4 by a farmer working in his field near Ismailia in the eastern delta of Egypt. Hophra ruled from 589 to 570 BC and was involved in events surrounding the fall of Jerusalem to the Babylonians in July, 587 BC. His Egyptian name was Wahibre, rendered in Greek as Apries. What is amazing about the artifact is that it appears to be completely intact. The inscription was carved on a stone slab (stela) about 7.5 ft high and 3.4 ft. wide. At the top is a winged sun disk; below that is the cartouche (name ring) of Pharaoh Hophra, followed by 15 lines of hieroglyphic text.

A translation of the inscription is yet to be released, but Dr. Mostafa Waziry, Secretary-General of the Supreme Council of Antiquities stated, “the stela is one of the border stelae that the king erected during his military campaigns towards the east” (www.egypttoday.com, June 5, 2021). In actual fact, no historical records of Hophra have been found; what we know of him has been gleaned from Greek historians and the Old Testament. If this does indeed turn out to be associated with a military campaign, it would be enormously significant.

The Babylonian king Nebuchadnezzar installed Zedekiah as puppet king of Judah in 597 BC (2 Kings 24:15–17). Zedekiah, however, decided to revolt and sought help from Egypt (Ezekiel 17:15). Nebuchadnezzar responded by laying siege to Jerusalem in January of 589 BC (2 Kings 25:1). Shortly thereafter, Hophra was crowned Pharaoh. His first official act was to come to the aid of Judah:

Pharaoh’s army had marched out of Egypt, and when the Babylonians who were besieging Jerusalem heard the report about them, they withdrew from Jerusalem. Then the word of the Lord came to Jeremiah the prophet: “This is what the Lord, the God of Israel says: Tell the king of Judah, who sent you to inquire of me, ‘Pharaoh’s army, which has marched out to support you, will go back to its own land, to Egypt. Then the Babylonians will return and attack this city; they will capture it and burn it down.’” (Jeremiah 37:6–8)

Later, Jeremiah proclaimed God’s word to the Jews who fled to Egypt following the fall of Jerusalem:

“This will be the sign to you that I will punish you in this place,” declares the Lord, “so that you will know that my threats of harm against you will surely stand.” This is what the Lord says, “I am going to hand Pharaoh Hophra, king of Egypt over to his enemies who seek his life, just as I handed over to Nebuchadnezzar king of Babylon, the enemy who was seeking his life.” (Jeremiah 44:29–30)  According to the Greek historians Herodotus (fifth century BC) and Diodorus (first century BC), Hophra was deposed by Amasis, one of his generals, because of his military failures, then strangled by an angry mob of Egyptians.

On July 14, just over a month after the discovery of the Hophra stela, the Israel Antiquities Authority announced a discovery that is also related to the Babylonian destruction of Jerusalem—a section of a massive fortification wall on the east slope of the city that had been torn down by the Babylonians (2 Kings 25:10). The wall was uncovered in excavations conducted by the City of David National Park on behalf of the Israel Antiquities Authority. Two portions of the wall had been found in earlier excavations, a 100-ft. segment 6 ft. or so to the north, and a 300-ft. segment further along the slope to the south. But there was doubt as to whether these wall segments were part of the city wall or other structures. The IAA release stated, “Now we can say with certainty that the city wall did exist, at least on the eastern slope.” 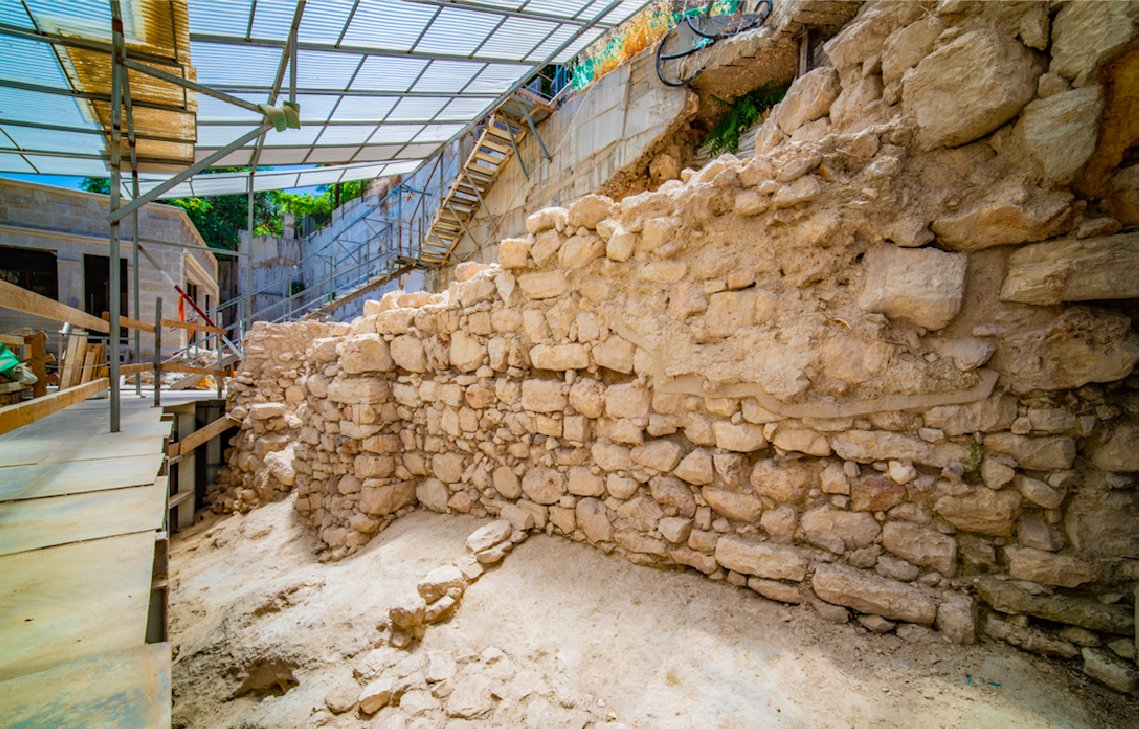 Two sections of the wall were found, one roughly 130 ft. long and another around 10 ft. long. It is 16 ft. wide and survives to a maximum height of 10 ft. Inside the wall, houses were uncovered that had been burned in the fire that destroyed Jerusalem in 587 BC. In addition, a Babylonian stamp seal was found that bears the image of a man standing in front of the Babylonian gods Marduk and Nabu, perhaps dropped by a Babylonian warrior. 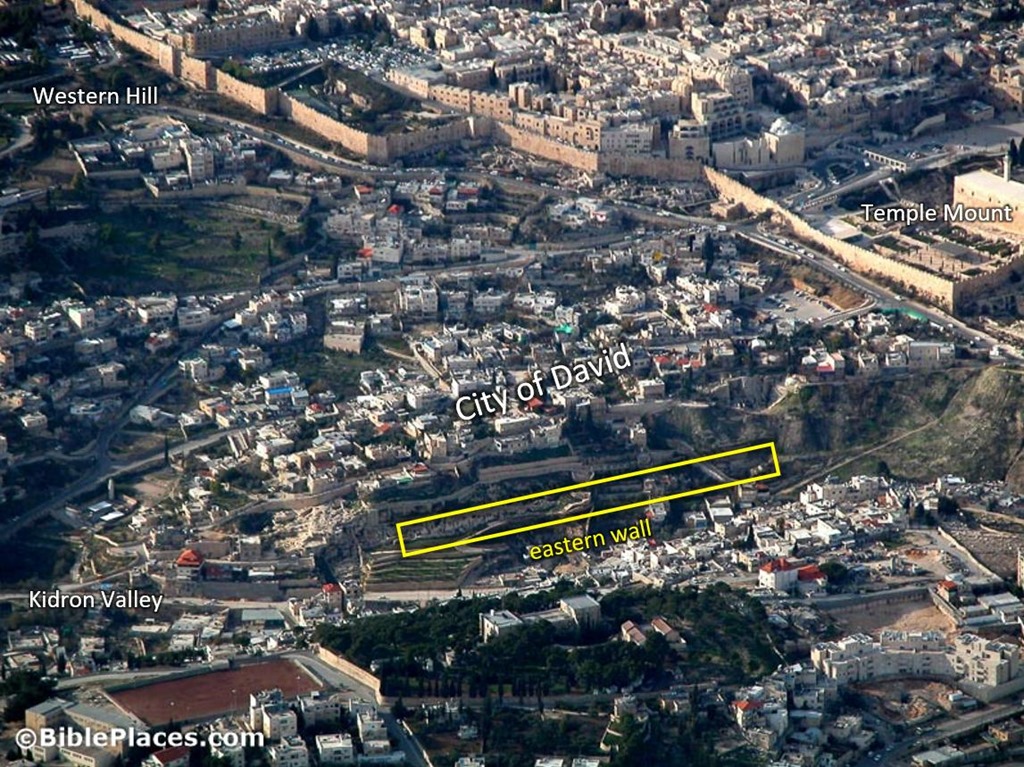 Credit: BiblePlaces.com | Todd Bolen
An aerial view of the location of the three segments of the eastern fortification wall of ancient Jerusalem. The marked portion shows entire extent of all wall sections discovered to date.

These amazing finds take us back to Bible times, and demonstrate the accuracy and trustworthiness of God’s Word.

Your continued prayers and support are much needed and greatly appreciated!