When we speak of the “Lands of the Bible” we really need to do so in the plural.  While many people think only of the modern-day country of Israel as the Land of the Bible, much biblical history occurred in the surrounding countries, including Egypt, Jordan, Lebanon, Saudi Arabia, Iraq, Iran, and Sudan.

Thinking about biblical places on modern maps helps me to contextualize what I read in the pages of Scripture.  It is a reminder that the stories of people and events in the Bible are actual historical accounts, rooted in real places, many of which have been excavated archaeologically. 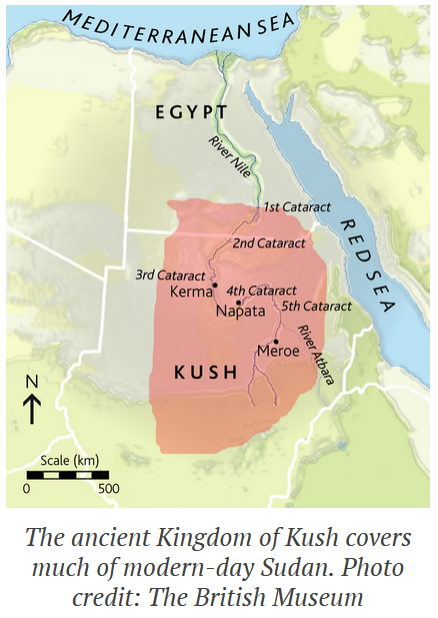 Today we’re going to look at the ancient Kingdom of Cush/Kush, which is mentioned frequently in the Bible.  The boundaries of ancient kingdoms do not often follow our modern-day country boarders.  Cush extended from southern Egypt into much of Sudan on modern maps.  This nation was named after Cush, one of Ham’s sons, one of Noah’s grandsons (Gn 10:6).  His descendants moved into the region of Nubia, and became the dark-skinned people known to this day as Nubians.

So who were some famous Cushite people in the Bible?

1) Moses’ wife – Many know that Moses was married to Zipporah, the daughter of Jethro, the Priest of Midian.  The Bible seems to indicate that Moses also married another woman – a Cushite.  In Num. 12:1  we read, “Miriam and Aaron spoke against Moses because of the Cushite woman whom he had married, for he had married a Cushite woman.”  It’s most likely that Moses had taken another wife – a dark-skinned woman from the modern-day country of Sudan.

2) Pharaoh Tirhakah/Taharqa – Sometimes known in the popular press as one of the “Black Pharaohs,” Tirhakah ruled Egypt during the 25th Dynasty.  During this period of time, Nubian kings from Cush conquered Egypt; Tirhakah himself reigned circa 690–664 BC.   When Sennacherib, King of Assyria, was laying siege to Jerusalem, a report came to him that Tirhakah was marching against him with the armies of Cush/Egypt. In 2 Kings 19:9 we read, ” Now the king heard concerning Tirhakah king of Cush, “Behold, he has set out to fight against you.”  Notice that the Bible correctly identifies this specific Pharaoh as a Cushite king. 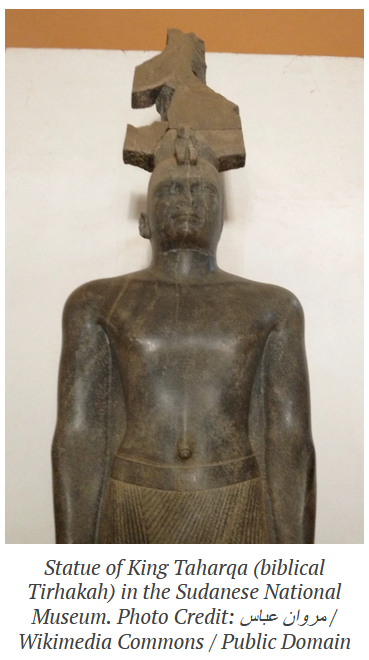 3) The Ethiopian Eunuch – By New Testament times, black people from the African kingdom of Cush had come to be known as “Ethiopians,” from the greek word Aithiops (ahee-thee’-ops), which meant “burnt skin.”   Thus, Ethiopia in Bible Times is not to be confused with the modern country of Ethiopia; it refers largely to the country of Sudan.

In Acts 8:27 we read that “there was an Ethiopian, a eunuch, a court official of Candace, queen of the Ethiopians, who was in charge of all her treasure. He had come to Jerusalem to worship.”

Queens who ruled the Cushite kingdom of Meroe were known as Kandakes (kan-dak’-ay), meaning “royal woman.” They’re mentioned frequently in ancient writings.  When Latinized, the k’s become c’s and we get the word Candice. So, “Candace, queen of the Ethiopians” is a dynastic title, like Pharaoh king of Egypt or Jabin, king of Hazor, not a given name.  One of the most famous Kandake’s was Queen Amanitore, who ruled in the early-mid 1st century AD.

Thus, the Ethiopian Eunuch was likely an official in Kandake/Candace Amanitore’s court, and was from the Nubian kingdom of Meroe, located in modern-day Sudan.  Today the a series of pyramids in Sudan mark the remains of the kingdom of Meroe. 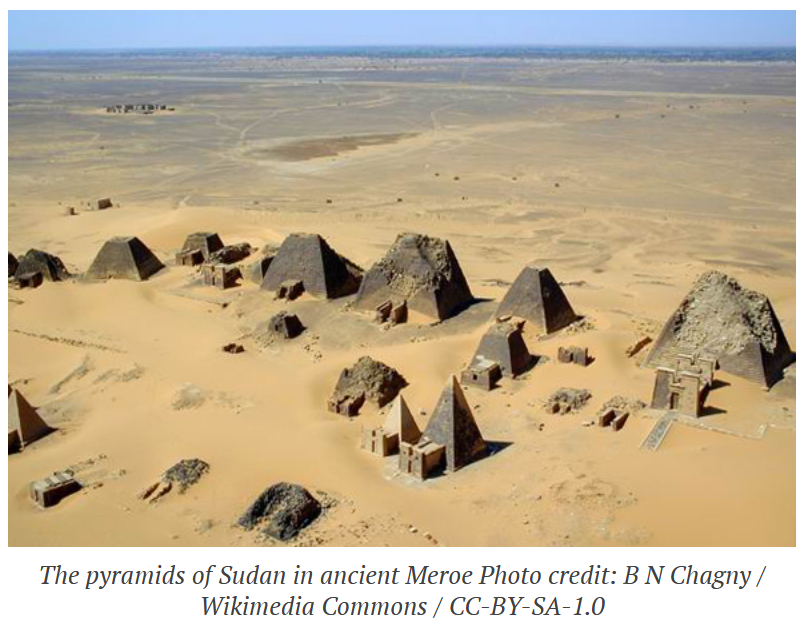 The country of Sudan has a rich biblical history and many of these ancient sites remain untouched by archaeology.  Many scholars in the country are in a race against time because modern hydro-electric dams that are being built are flooding many important archaeological sites.

A Christian in the first century met a man from Sudan on the desert road from Jerusalem to Gaza.  His name was Philip and he told the Ethiopian Eunuch “the good news about Jesus” (Acts 8:35).  That Cushite man responded in faith saying, “I believe that Jesus Christ is the Son of God” (Acts 8:37). It is my prayer that many modern-day Sudanese would likewise hear the good news about Jesus – his love for us, and his offer of forgiveness for our sins – and respond in faith.

This article was originally published on biblearchaeologyreport.com (May 24, 2018).