Then came the Festival of Dedication at Jerusalem. It was winter, and Jesus was in the temple courts walking in Solomon’s Colonnade. The Jews who were there gathered around him, saying, “How long will you keep us in suspense? If you are the Messiah, tell us plainly.”

Jesus answered, “I did tell you, but you do not believe. The works I do in my Father’s name testify about me, but you do not believe because you are not my sheep. My sheep listen to my voice; I know them, and they follow me. I give them eternal life, and they shall never perish; no one will snatch them out of my hand. My Father, who has given them to me, is greater than all; no one can snatch them out of my Father’s hand. I and the Father are one.”

As a young boy, I remember well the excitement as the Christmas season approached. There was snow on the ground, sleigh riding, Christmas trees and caroling, manger scenes and eggnog. Yet I also remember another holiday which my Jewish friends celebrated about the same time—Hanukkah. In elementary school they would play with dreidels and tell about the presents they received the previous night. I must confess my greedy jealousy. They got presents for eight nights and we only got them on Christmas morning!

Years later, two friends of mine, believers in the Lord Jesus living in Israel, shared with me their excitement over the impending birth of their firstborn child. I inquired as to the due date of the child’s birth. The proud father-to-be replied, “The doctor said the child is due Dec. 25th.” I lamented, “Oh, bummer, the poor child will only receive one set of gifts for Christmas and his or her birthday.” Yisrael half-jokingly responded, “That’s no problem, we’ll celebrate Hanukkah instead!” We had a good laugh, but I thought to myself, “The Lord Jesus, the Messiah of Israel, celebrated the festival of Hanukkah, yet there is no record in the Gospels of Him celebrating Christmas!”

This year, 2022, our Jewish friends will commence celebrating Hanukkah at sundown on the evening of Sunday, Dec. 18, and end on the evening of Monday, Dec. 26. Families will gather together to exchange presents and also to light a new candle each night on their nine-branch candelabra.

Hanukkah is a festival that commemorates the purification and rededication of the Temple by Judas Maccabeus on Kislev 25, 165 BC (usually in December). Three years prior, Antiochus IV, the Seleucid (Syrian) king, had defiled the Temple by erecting an idol to Baal Shamen (Zeus), sacrificing a pig on the altar, and proclaiming himself to be a god. Some of the coins he minted had his features on the face of Zeus, along with the words “Theus Epiphanes,” meaning “the god manifest.” He also decreed that Torah (the Law of God) could not be studied, under penalty of death; circumcision was likewise forbidden, and the Sabbath was not to be kept. This brought an internal struggle within Judaism out into the open. On the one hand there were the observant Jews who wanted to keep Torah, and on the other, the Hellenized Jews who wanted to assimilate into the Greek culture around them and become “born-again” Greeks!

Coin of Antiochus IV. The arrow on the left-hand side of the left coin points to the phrase "Theus Epiphanes," which declares him to be "the god manifest."

Hellenized Jews. They wanted to become "born-again" Greeks, participating in Greek-style wrestling in the gymnasium.

Antiochus sent troops from village to village with a statue of himself, ordering people to bow down to it. One day they arrived in the village of Modi’in. An elderly man stepped forward to comply with the order, but an observant priest, Mattathias of the Hasmonean family, thrust him through with a spear and also killed one of the Seleucid soldiers. Thus began the Maccabean Revolt. Mattathias, his five sons, and others fled into the Gophna Hills and conducted guerrilla warfare against the Seleucids for three years. Finally, Jerusalem was liberated—yet the Temple was defiled. The history of this revolt is found in 1 Maccabees 1 and 4 and 2 Maccabees 6 and 10.

The rabbis recount the miracle of Hanukkah in these terms:

On the twenty-fifth day [of Kislev] is Hanukkah. Eight days in which one may not mourn.1

For the Greeks entered the Temple and they defiled all of the oil in the Temple, and when the Hasmoneans prevailed, they looked and didn’t find anything but one flask of oil that was stamped with the High Priest’s seal. And there was only enough to light for one day. And a miracle was made and they lit for 8 days. The next year they established these days as holidays, for the recitation of the Hallel and for Thanksgiving.2

This is the reason Jews light one additional candle each night on their candelabra. 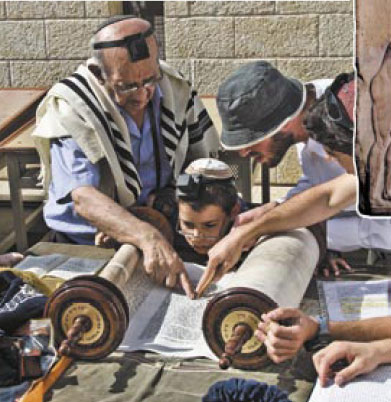 The Jewish reader would immediately pick up on the messianic connotation of this discourse. The Davidic Messiah would be a Shepherd (Ez 34).

As Jesus walked through Solomon’s porch on the east side of the Temple enclosure, some Jews approached Him and asked Him point-blank, “Are you the Messiah?” (10:24). Jesus had to be careful how He answered that question. During the festival, throngs of Jews caught up in the nationalistic fever were visiting Jerusalem. The word “Messiah” might spark off riots because of its heavy nationalistic and political overtones.

Roman intelligence, headquartered in the Antonia Fortress to the northwest of the Temple, was aware of a popular song entitled “A Psalm of Solomon, with Song, of the King.” In this song, composed during the mid-first century BC by a Pharisee, the Lord was acknowledged as king and as a Davidic ruler who would reign forever. The songwriter describes how the latter Hasmonean rulers led the people away from the Torah and the people were punished by the Romans under the leadership of Pompey. He prays that the Lord will raise up a king, the Son of David, to rule over Israel. This king would “shatter unrighteous rulers,” “purge Jerusalem from nations that trample (her),” “thrust out sinners,” “destroy the pride of the sinner,” and “destroy the godless nations.” All this would be done by the Israelites’ king, the Lord Messiah (Psalms of Solomon 17).3 If Jesus answered the question “yes,” the Roman authorities would have arrested Him on the spot for insurrection.

Jesus does, however, answer the question in the affirmative, but not directly. When He answers, He is careful not to use the term Messiah and its understanding at that time. After pointing out the security that a believer in the Lord Jesus has because of faith in Him, He says, “I and My Father are one” (10:30; NKJV). That statement had heavy religious overtones for the festival they were presently celebrating.

Those gathered on the Temple Mount recalled the events nearly 200 years before in which, on the very same mount, Antiochus IV, a mere man, proclaimed himself god. Jesus, the Lord manifest in human flesh, made the same claim, but His claim was true. The Jews picked up stones to stone Him for blasphemy because, in their thinking, He was a man who made himself God (10:31–33). Jesus declared that He was the fulfillment of Hanukkah by saying the Father “sanctified” the Son of God and sent Him into the world (10:34–36). The Father was in Him, and He in the Father (10:38). If the Greek word “sanctified” were translated into Hebrew, it would be “dedication,” or Hanukkah.

John wrote his Gospel primarily to a Jewish and Samaritan audience. One of the unique things about John’s Gospel is his emphasis on the Jewish and Samaritan festivals and his indication that Jesus was the fulfillment of these holidays. Hanukkah was the rededication of a defiled Temple. At the beginning of Jesus’s public ministry, He said, “Destroy this temple, and in three days I will raise it up.” “Then the Jews said, ‘It has taken forty-six years to build this temple, and will You raise it up in three days?’ But He was speaking of the temple of His body” (Jn 2:19–21; NKJV). Herod’s Temple had been defiled by a wicked and corrupt priesthood. The Lord Jesus was “sanctified” by His death, burial, and resurrection and is the New Temple.

The apostle John selected “signs” (miracles) and events when he penned his Gospel, under the inspiration of the Holy Spirit, to convey two purposes (Jn 20:30–31). The first was to present the deity of the Lord Jesus. John skillfully selects the Hanukkah event because of the festival’s impact on the crowd. In contrast to the arrogant and blasphemous statement by Antiochus IV, Jesus truly is God manifest in human flesh. The second purpose was to challenge people to put their trust (believe) in the Lord Jesus Christ as the One who died for their sins and rose again from the dead. When they trust Him, God gives them the gift of eternal life, forgiveness of sins, and a home in heaven. There seems to be a marked contrast between the response of the Jews on the Temple Mount (10:37–39) and the response of those “beyond the Jordan” who believed on Him (10:40–42). What is your response? Have you trusted the One who is the fulfillment of Hanukkah? 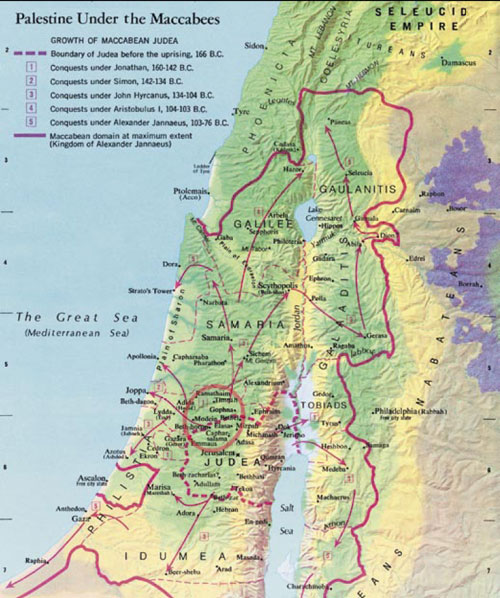 Map of Palestine. See Modi'in (Modein) and Gophna, where the spark that ignited the Maccabean Revolt occurred.

1 Megillat Taanit, Scholion, Oxford Manuscript, as quoted in Conservative Yeshiva Online, “The Miracle of the Oil: Why Is Hanukkah Connected with Fire & Why Is It Eight Days?,” Sefaria, accessed November 17, 2022, https://www.sefaria.org/sheets/85895?lang=bi. Bracketed material original.

2 Bavli Shabbat 21b, as quoted in Conservative Yeshiva Online, “Miracle of the Oil.”

3 The quotations come from verses 24 to 27 in “Brenton’s English Translation of the Septuagint: Psalms of Solomon 17,” BiblIndex, Cahier Consortium, accessed November 17, 2022, https://www.biblindex.org‌/en/bible/brenton-s-english-translation-of-the-septuagint/ps-sol-17.